The day of departure dawned sunny and hot. We did all our last-minute chores and managed to get on the road about 9:30am. Unfortunately it took nearly an hour to get through the Canada/US border, most of which was waiting in line. The border guard was really quick and hardly asked us anything at all. Next stop was the supermarket in Mount Vernon, WA, for wine and groceries. There’s so much that you aren’t supposed to take across the border that it just seems easier to buy fruit, vegetables, meat and dairy after we cross.

The traffic was really bad through Seattle and Tacoma due to an accident. A big transport rig had rolled downhill from the northbound section of the I-5 freeway and slid nearly onto the southbound lanes! We were nowhere near but the traffic was backed up badly for many miles. It was really hot too so it was difficult to creep forward slowly with no shade even with the windows wide open. I had to put sunscreen on my right arm so I didn’t get burned! We finally got to Seaquest State Park which is on the road that goes to the north side of Mt St Helens at nearly suppertime. So much for Day 1.

Day 2 we went around to the south side of the Mt St Helens volcano: 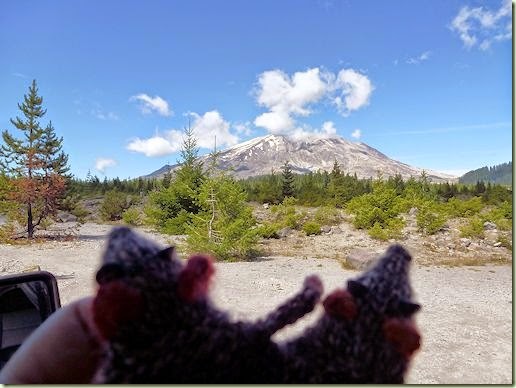 The Flat Rats wanted you to know they have (of course) come along with us. And to remind me that I haven’t actually mentioned them. Oops. We all hiked the beautiful Lava Canyon. The trail has 2 bridges across the river canyon, one of them a high suspension bridge that was a bit wiggly and really fun to cross. 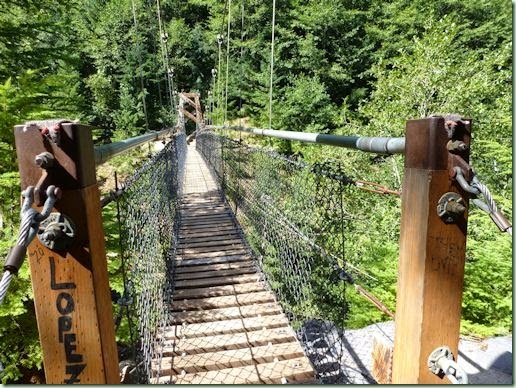 Can you see the rats on each post? Rats Gate Bridge! (Sorry. That was Vancouver area humour.) Then we went to the Ape Cave, a long lava tube with 2 sections. We only did the lower section which was 3/4 mile long and easier than the upper one. After all we’d already done a bit of a hike previously. It was pretty busy with lots of families and a flock of 6 and 7 year olds but still very interesting. This suspended rock about 7 feet over my head is called the Meatball: 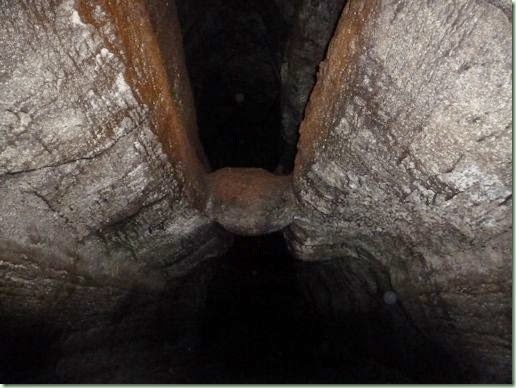 Apparently it was a chunk of solidified lava that floated on the molten lava in the tube and got stuck where it remains, some 2,500 years later. We wisely brought our headlamps on this trip knowing we were going to need them. More lava tubes to go later.

Just down the road from Ape Cave is the Trail of Two Forests, the new one is obviously the usual green Pacific Northwest conifers and big leaf maples. The less obvious forest was the one that used to be there but was wiped out when a long-ago lava flow surrounded the big trees and just left holes, casts actually, where they had been before being turned into charcoal and worn away: 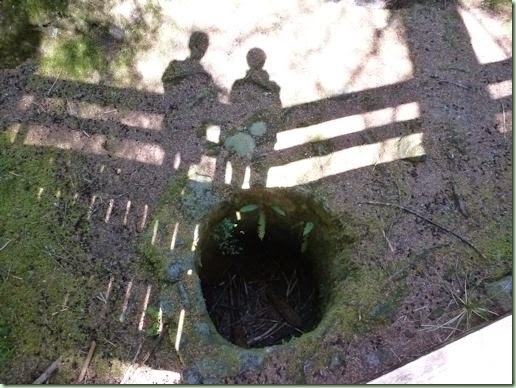 There’s even a tunnel formed from lava over casts of downed trees, called The Crawl, that you can worm through if you have a mind. We didn’t! You’d need knee pads, gloves and a headlamp to do it. We didn’t bring our knee pads. Awww… 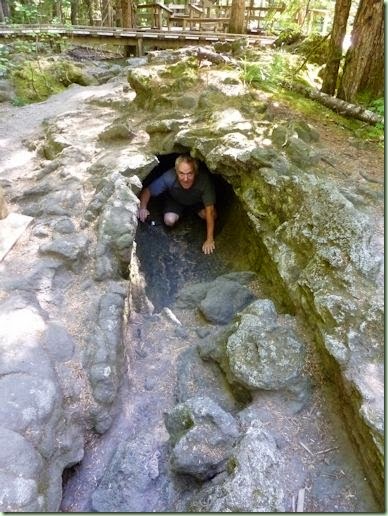 Thom was only pretending that he is emerging from the end of the Crawl. The beginning is somewhere back behind him about 50 feet. 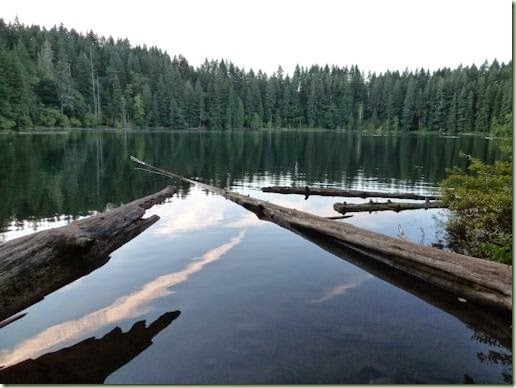 I got us here by navigating through the back highways of southern Washington State on winding roads through tiny towns and past little farms and lots of trailer parks. Thank you, Google Maps for your accuracy! Couldn’t have done it without my notes. It was late again by the time we got there though so we didn’t do much investigating. Good thing we had reservations for the first 4 days of our trip or we wouldn’t have been so relaxed about our timing.

Day 3 started with Fabric Shopping in Portland, OR. 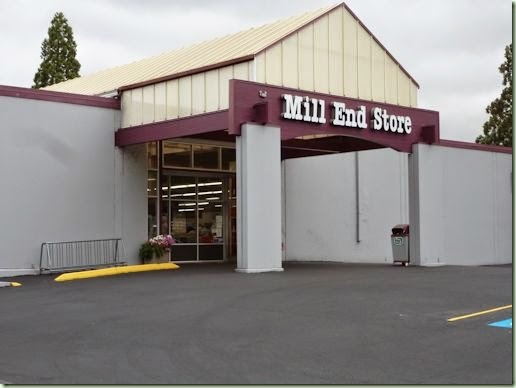 We have nothing like this gigantic fabric store in Vancouver!  It has such an amazing selection. I went just a little bit nuts (of course!) and bought about US$340 worth. No taxes in Oregon. This is probably at least a dozen garments’ worth: mostly ponte knits, a herringbone twill in linen and rayon for a shirt for Thom and some wool plaid for a Sewaholic Minoru jacket for me with a Kaufmann batik for lining. My collection is currently stuffed in a back cupboard so I can’t photograph it until we get home. Because it will have to be dragged around for another month so, the most out-of-the way spot is best. I had such a fun time! Yet I think I was pretty controlled really. I’m SOOOO behind on my sewing projects!

After Portland we headed east along the Columbia Gorge. For the first time we went along the old Columbia Highway and stopped to see Multnomah Falls: 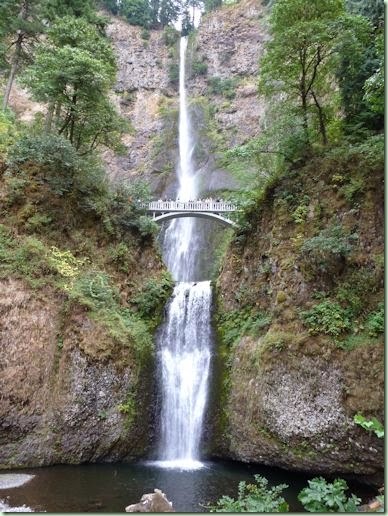 It was really busy but such a lovely waterfall! We hiked up to the bridge you can see above the lowest level. Afterwards we continued along the Gorge to Memaloose State Park where we had reservations. A hot shower, the first since we left home, was so delicious!

As I write this I’m using WIFI in Safeway/Starbucks in beautiful downtown Pendleton, OR. Tonight it’s Farewell Bend State Park right on the dividing line between Pacific and Mountain Time zones with Idaho just across the Snake River. More soon!

I am really enjoying your trip report and can't wait to see the fabric. Rather fall-like here in Pennsylvania and I have been knitting and sewing. Keep on letting us know what is happening there! Peg

Glad to see all is well & you remembered Safeway/Starbucks WiFi!! I'd LOVE to get lost in that fabric store . . . take care.

Great start to your vacation. Look forward to the next report on Trek2014.

I feel like I'm in your back (flat rat) pocket with the wonderful reports. Keep notes when you can't get wifi and tell us about everything.