I think it’s definitely autumn here. Day before yesterday we woke up to wind and rain and this interesting pattern of leaves on the back porch: 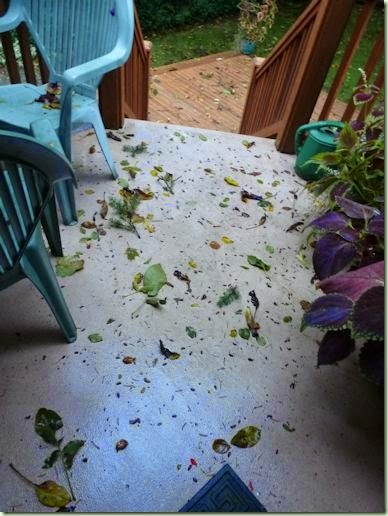 There’s bits of all the neighbourhood’s trees all over our yard, including varieties that aren’t really all that nearby. It was a wild and stormy night. And then it happened again at least for awhile the next night too. I’m getting kind of tired of sweeping the deck now. Every time you think it’s stopped raining and the sun comes out so you decide to go outside, it immediately starts sprinkling on you. Yep. Autumn in Vancouver.

Oh, speaking of trees, I found out that our shelter tree in Death Valley was a Tamarix aphylla, aka athel tamarisk, listed as an invasive species although this one isn’t considered as naughty in North America as its smaller relatives are but is more badly behaved in Australia. I certainly was happy for its continued existence. Your weed tree is my saving grace. A rose by any other name…etc.

Meanwhile back at the loom, I actually finished that darned warp! The one I started to weave so long ago before we went away to the aforementioned desert. I was so concerned that it wasn’t going to work out! I was wrong. It turned out very cool indeed: 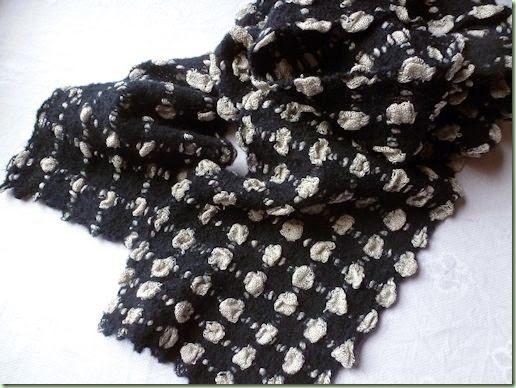 The yarns are Jaggerspun superfine merino and 2/15 natural tweed silk. I actually followed a recipe, Big Bumps Scarf from Madelyn van der Hoogt, former editor of Handwoven magazine. I should have trusted her! It was hard to beat to the equivalent of window screening but eventually I got the feel of it better with practise. My more experienced buddy Kirsten also gave me a confidence boost when she said that it didn’t matter if it was uneven because the fulling process hid a lot of problems. And she was right! You can’t even see my treadling errors. I did try to even out some of the wefts that had slid badly when it wrapped around the cloth beam but even that wasn’t really a problem in the end.

I did have a moment of panic when I was unwinding it carefully off the loom. The sticks that I’d used instead of the recommended paper (because they were there and the paper wasn’t) fell off at an angle and I had to get Thom to come rescue me before the whole thing hit the floor in a tangle. I was actually surprised that the fabric wasn’t quite as delicate as it looked! It survived without any obvious damage. I knotted the warp stripes and tied the beginning to the end before fulling it by hand in a wash pan. I alternated hot soapy water with cold to help it full faster and then spun it in the machine to get out the excess water so it would dry faster. It went from 13.5” wide down to  7.5” and 120” long to 84”. Amazing really! It didn’t shrink quite as much as Madelyn’s version but that could be because I used silk instead of wool as the non-fulling yarn.

With this type of weave I learned that you have to let go of the results. They will be what they will and you really don’t have a lot of control over it. I fulled the scarf until the wool areas weren’t sliding around and they seemed cohesive. The silk areas bumped up (or down) in their own topography. A surprising amount of colour came out of the wool, green at first and then shifting to blue as the yellow was cleared out. I was hoping that it hadn’t stained the silk because I was using Orvus as the detergent and not Synthrapol which is helpful in keeping excess dye from redepositing. Synthrapol is usually used with Procion MX dyes on cellulose fibres so I hadn’t thought that I might need it with silk and wool. However I can’t see a difference now that the fabric is dry. 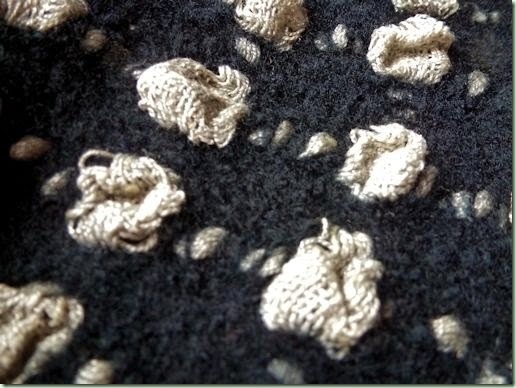 The scarf is dense and warm but still fairly light and flexible. Now I want to put on another warp! This time maybe for placemats? The ones I made in the 1980’s are wearing out. Quelle surprise.

What else? Oh yeah. Alternating with the Antelope Canyon Socks I’ve been knitting the Silken Haruni Shawl, probably more like a scarf since it’s going to be pretty small. Anyway, I decided that I didn’t like the look of the lace – too thready and the yarn-overs and the central spine stitch were loose and wobbly. Can you see what I mean? 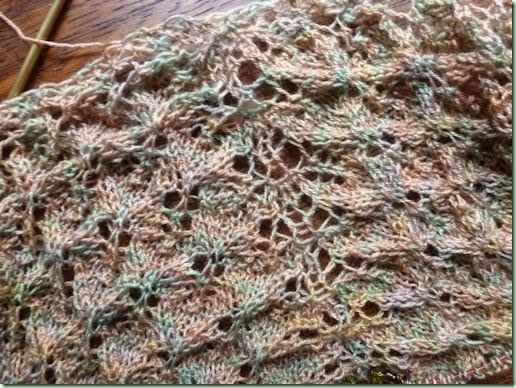 Anyway, I started again with the second ball of this yarn and 2.75mm needles and not only do I like the results better, it’s actually easier to knit on the thinner needles. It’s pretty small still: 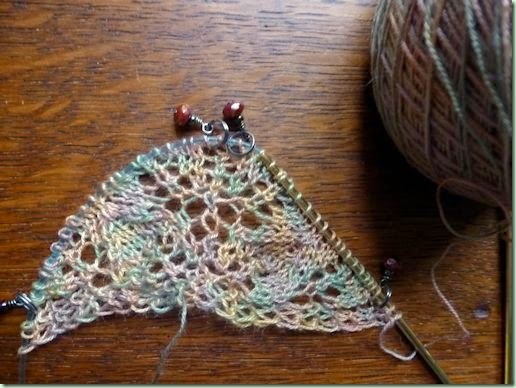 I also knit the central stitch on the right side through the back loop. The twists every other row keep it much more contained and neat. Now I have to sadly frog the first version. Oh well. It’s only knitting!

I spent a goodly part of yesterday trying to catch up on my paper notes of all my recent makes. I was surprisingly far behind! I guess once I’ve blogged it I think I’m done but I do prefer to also have all the notes together in a binder. I have quite a few of these now! It helps me to see at a glance all that I’ve accomplished and gives me a quick reference if I need it to make something again. Ravelry is fabulous to keep track of your knitting (and crochet) but is only recently expanding functionality with weaving, spinning and dyeing. And of course it’s not at all useful for sewing. For some reason although I’ve been a member of Pattern Review forever, I’ve never posted anything to it. I’m a lurker in the sewing forums. I know I should contribute but perhaps I’m just feeling to spread out as it is?

Tres impressive, Louisa. Wow, keeping all those notes too. I thought blogging might do that for me. nah. But at least I have accountability because of it, which is nice. You, however, are creativity incarnate. Always amazing in all the areas in which you 'stir the pot.'

Thanks for your continued encouragement, sweetie. Accountability is good! For us all.