On to the seriously hot stuff! Day 21 found us heading from Grand Canyon, Arizona, to the Valley of Fire State Park, Nevada. As we left early just as the sun was rising we encountered many deer and a small herd of elk near the road. Apparently the male elk were heard bugling in the park but we didn’t manage to hear it ourselves while we were there. But at least we saw some of them.

That day’s trip was a long one because there is no direct route to where we wanted to go. We had to go south and then east and then north again and around Lake Mead, which is a vast reservoir in the very arid desert near Las Vegas. We stopped at the Hoover Dam, which is the plug in the lake. Amusingly the van was searched by security before we could drive to the parking lot near the bridge that overlooks the dam! I guess someone thinks it would make a nice bombing target but the search was really kind of silly. Somebody must feel better about it with all the guards and all though, huh? The dam is quite narrow but very tall. 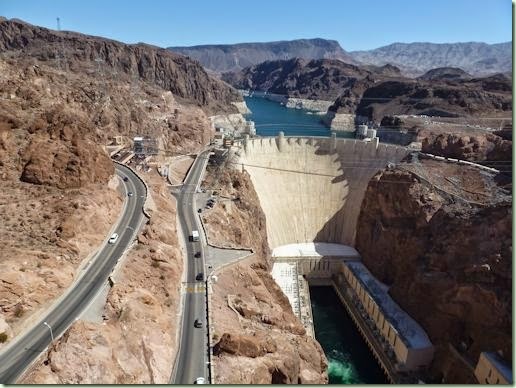 This is the view from the very windy bridge which, by the way, eats hats! We saw clumps of them stuck on the rocks off the edge. My hat luckily has a chin strap but the Flat Rats stayed in my bag so they couldn’t go visiting the hat collections no matter how tempting a thought that might be.

We were getting very hot and tired by this point. At the Lake Mead National Park gate (where we happily used our America the Beautiful pass yet again) the ranger said it was 102F. I sort of want a thermometer for the van, but I really think it’s just as well that we didn’t have one! No air conditioning. Stupid hot. Past “Easy-Bake Oven” and into “wood-fired pizza oven” territory. Guess we found out why the state park next to the Lake Mead NP is called Valley of Fire.

Well, actually the name is because of all the beautiful orange-red rocks! Different shapes than Capitol Reef or Arches, with lots of holes and texture. You could imagine all kinds of animals and weird aliens. Or maybe Flat Rats? 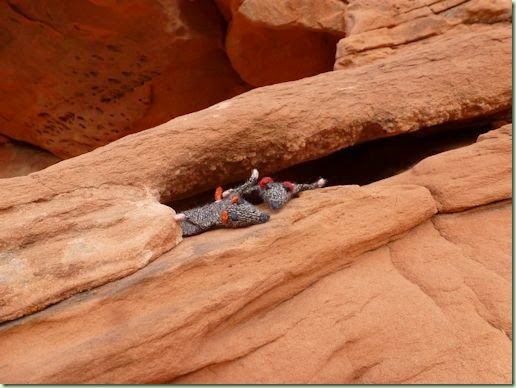 They felt they hadn’t been featured enough lately. Heh. There’s even an elephant rock but unfortunately I didn’t get a photo of it. The campground was nestled in between the funky rock formations: 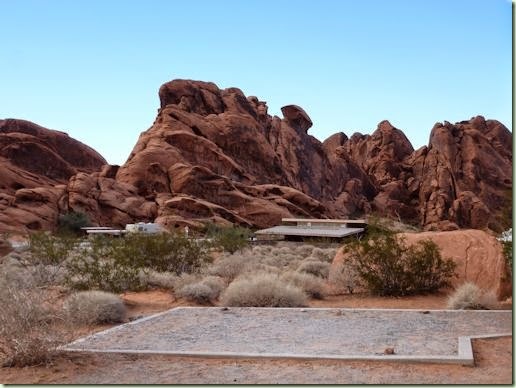 Not a lot of shade anywhere although the picnic table came with its own ramada for which we were very grateful. Also free showers! I’m sure hot water isn’t a problem there – even the water coming out of our campsite water tap was hot enough to bathe or wash dishes in. We spent the rest of the afternoon trying to stay cool and hydrated until a storm came up just after dark. It still was pretty darn hot but the wind was strong and we could see lightning off in the distance. No rain where we were though. Our sleep that night was on top of the covers!

But that was not nearly as bad as the next night, Day 22, even though the daytime temperature was slightly cooler at 98F, which we found out from the Visitor’s Center where we spent a blissfully cool hour or so checking out the exhibits. Before that we spent the early morning driving to the end of the Scenic View road and hiking a relatively short but interesting trail among the rocks: 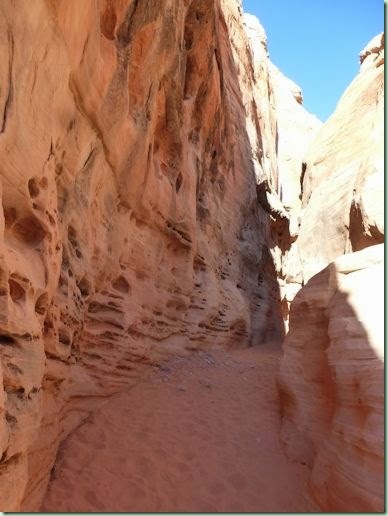 On the way back we took another trail to the petroglyphs: 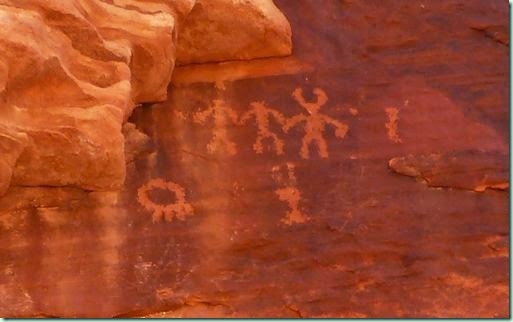 I love these people holding the Shaman’s hand. There were lots of petroglyphs along a couple of sections of rock walls on the single trail. Some of the designs were familiar (bighorn sheep!) and some were quite different. And at the end of the trail, Mouse’s Tank, a natural water collecting spot in the rocks named after a notorious Paiute who hid out there in the late 1800’s: 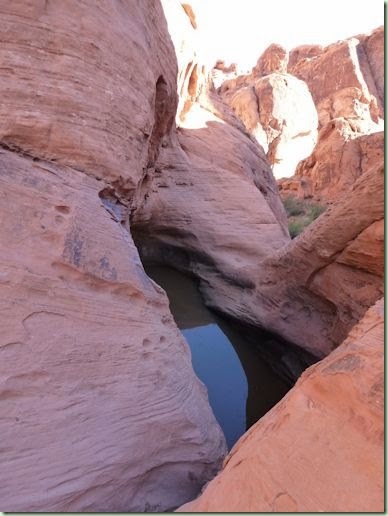 Don’t think I’d drink that water without boiling it for about an hour though! Yuck. But it’s the only source nearby if one was holed up out there.

We also went to see the Petrified Logs: 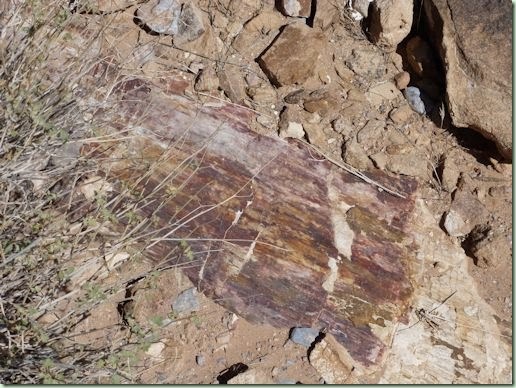 This one had particularly pretty colours. Each one was surrounded by a chain link fence to prevent damage which kind of ruins the ambiance. Too bad some people won’t behave themselves, huh?

Quick digression. One thing I haven’t mentioned in these posts so far is the ridiculous number of times cups of tea have been spilled on this trip. Mostly when it was really hot or we were really tired and therefore even more clumsy than usual. I managed to spill at least 3 times, including once all over my little netbook computer, Bluet. Luckily it was very warm and dry and we were able to dry the computer out really well with no damage. Whew! However, the last time it wasn’t me who spilled but it was me who got scalded quite badly on my leg near my knee. The accident happened on our second day at Valley of Fire and it put something of a damper on my camping enthusiasm for the next few days. Not to mention having to shop for bandage supplies twice. Damn. Stuff happens, eh? It doesn’t hurt really (unless it’s touched) but there’s blistering and 5 patches of broken blisters that look rather gross. And they need covering if I wear long pants or go to bed. It’s taken me a couple of days to get the right bandage system that doesn’t stick to the ouchies or alternatively fall off. OK, this is probably TMI, isn’t it? Guess I was just feeling a little sorry for myself there. Digression over.

Anyway, back to the road. Day 23 found us heading through the middle of Las Vegas on the freeway at 8:00am. That place is so bizarre! We saw lots of the big hotels and casinos as we whizzed by, including the big black glass pyramid. And the big fancy police building seen in the CSI TV show. No idea what the LV draw is for people. I’d rather spend my money on fibres and yarns and fabrics. But that’s just me.

Instead we were on the way to the hottest day and the hottest place of our trip, Death Valley. Yes, we just might be certifiably nuts! When we got there the temp was already 107F. The main campground at Furnace Creek was closed so we had to go to the smaller Texas Springs one that they’d opened instead. There was nobody there – big surprise – and one shady campsite in the whole place. We took it and blessed the lovely big sprawling tree of a species completely unknown to us: 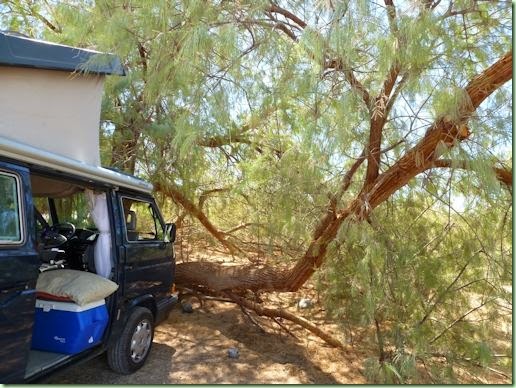 Life-saving tree! I promise I’ll look it up later. It has scaly needles instead of leaves but it’s not a conifer because of the little spiky stems with small white seeds arranged in a spiral around them. (We still have some of those in the van that I missed sweeping out!) Also lovely textured reddish bark. Definitely a desert tree. We spent the afternoon under our precious tree trying to stay cool without much success. It was way past stupid-hot and into 9th level of hell-hot! Approximately 114F or over 45C according to the ranger’s prediction at the Visitors Center. He actually laughed at us for camping there in our old van. Didn’t try to discourage us though. Well, I can’t say it was particularly comfortable but we survived. Secret weapons? Drinking lots and lots and LOTS of water plus a wet washcloth each for neck and head and arms and anywhere else that needed slight cooling. Luckily we were armed with lots of ice in the cooler.

Needless to say, we didn’t stay another day torturing ourselves. Instead, on Day 24 we got up before the crack of dawn (5am) and headed for the heights where it was bound to be cooler. We were a little sad that we missed some of the sights in Death Valley. We did manage to see Zabriskie Point on the way in: 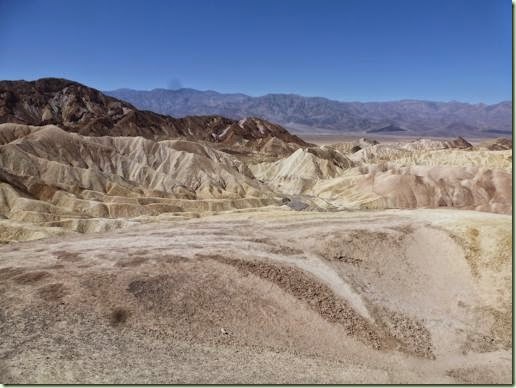 That’s looking down into the lowest area in North America, several hundred feet below sea level.

But then we’d really be idiots to kill ourselves over a few sights, wouldn’t we? I did learn a lot about what happens in extreme heat though. Everything is HOT even if it’s not in the sun. Every surface: cloth, plastic, metal, anything, even the insides of the cupboards. Drinking water is nearly hot enough to make tea. And it doesn’t get all that much cooler when the sun goes down. Even stark naked you can sweat yourself into a puddle all night long. It’s so far outside the realm of our usual experience living on the coast. Kind of glad we’re finally heading back to our Wet Coast now.

So after Death Valley we ended up in a forestry campground on the road toward Tioga Pass which is the eastern gateway to Yosemite National Park, California, our 9th state this trip. We drove up and down and through a long and rather smoky valley to get there, thanks to a number of ongoing forest fires in the region. It was actually cool enough to need long pants and a sweater! Yay! Next it’s into Yosemite and out the western end.

Also before I forget, I finished a couple more knitting projects. This one is already washed and blocked. It dried in about an hour in the hot dry air in Valley of Fire. 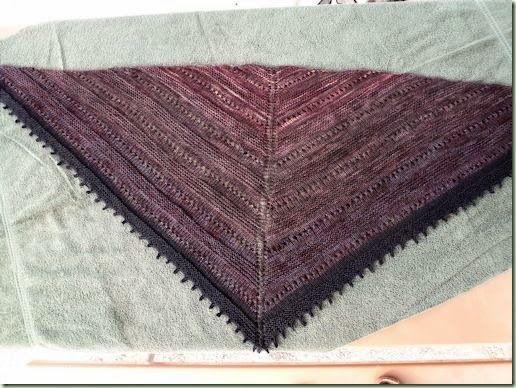 Lala’s Simple Shawl in 4 different leftover sock yarns. I added a picot hem which I quite like. Even though I used thinner yarn and smaller needles it’s quite large and will be a warm addition to my rather large and still-growing stash of winter woolies. I love that it used up a lot of leftovers too, none of which were enough for a pair of socks on their own.

I also finished another cowl but haven’t had a chance to block and photograph it yet. Fourth finish and another two started. More soon! Oh wifi – how I miss you…