Past And Current Projects

I’ve been up in the studio sewing but there’s nothing much to show you yet. I’m working on Katherine Tilton’s B5891 View A which is either a top or a vest depending on how you wear it. It has 90 million (OK, only 15) pattern pieces most of which are asymmetrical and cut out singly. I had cut this out back in August and I wisely put a little snip of masking tape with the piece number on the back of each one. Otherwise I would have been in a right muddle! Even with helpful hints from those who have made it before me, this is definitely not an easy thing to sew. As well as the many asymmetrical pieces, there were discrepancies in the instructions and the two front facings were about an inch too long. Sheesh, Butterick! It’s taking me 4 sessions to finish because I can only work on it just so long before my patience runs out or my brain goes squirrely. Remember, I’m not exactly a newbie seamstress so heaven help anyone with less experience! More on this one soon. Nearly there.

Anyway, dragging you back to the knitting that I finished while we were driving in the deserts of the Southwest. For some reason the colours will not come out correctly in the photos. It’s either my point-and-shoot giving up the ghost or the light this time of year. Or operator error. Who knows? Anyway, the Gracie’s Frolic Scarf is a fairly dark green/brown combo. I’m not sure what it looks like on your screen but on mine it’s lighter and more contrasty than in real life. 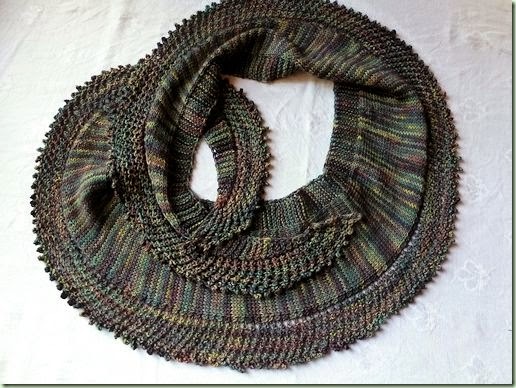 The yarn is Ancient Arts Fibre Crafts sock yarn (75% superwash wool/25% nylon) in the hand-dyed Frolic colourway. The pattern is Cinnamon Grace by Katie Harris Knitworks, a free download on Ravelry. I used the recommended 3.25mm needles but I think mine turned out slightly smaller and I had a bit of the yarn leftover, enough for Thom’s Glasses Sock plus extra after that. I like the curly shape a lot. It was knit end to end and then the edge stitches picked up for the outer border and finished with a picot bind-off. If I recall I think I did a couple of extra repeats of the 2-row edging to make it a smidgen wider. I washed and laid it flat to dry but didn’t pin each picot out or anything. Just straightened everything as best I could and put a pin in the end points.

Next up is the Remix Bridger Cowl. 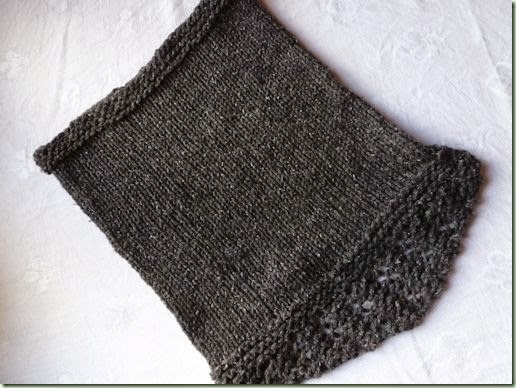 If you remember that far back, I had used leftover Berocco Remix (aran-weight nylon/cotton/acrylic/silk) to knit a large cowl/turtleneck collar kind of thing (Ambitus) back in March 2011 that was very nice but it didn’t work with my wardrobe somehow. If I haven’t worn it more than once in 3-1/2 years, what can I say? So I frogged it and used the free Bridger Cowl pattern by Kris Basta to make a smaller and more wearable (for me anyway) cowl. This was kind of a fun knit. You start with just a few stitches for the lacy bottom edge, increase to the centre front, decrease back down again and then join in the round and pick up the selvedge stitches for the rest of the tube. I used 5.5 mm needles for a slim fit but I think the recommended 6mm would give a lacier effect. It’s a very quick project.

I have quite a lot of the Remix yarn left but not enough for a second cowl. Too bad because I was hoping to get a Bandana Cowl as well, perhaps for a gift, but I’ll have to think of something else to use for that project. I think I like the shape of the Bandana (why do I always want to type Banana instead?) Cowl better than the Bridger Cowl now that I’ve made both. But I also like the wee hint of lace on the Bridger.

What else haven’t I shown you? I think I’ve already mentioned the Travelling Shawl that I finished while we were in Valley of Fire, Nevada. 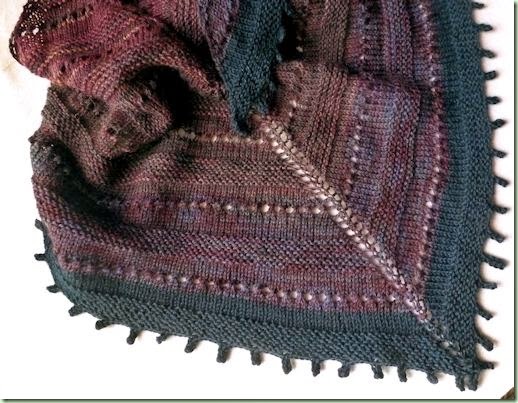 This is a slightly better photo with more accurate colour. The pattern is Lala’s Simple Shawl, another free Ravelry download. I seem to be taking advantage of those, don’t I? It’s not because I’m too cheap to pay if I really like a pattern but hey, if it’s a nice pattern why not? It was easy to knit on while we were on the road too.

Anyway, this pattern works with a variety of yarn grists and I was able to use up 4 partial odd balls of sock yarn that all coordinated pretty nicely. I used 3.75mm needles and added a picot bind-off at the end. There were only a few yards left when I was done. (Then I used some of the navy for Thom’s Glasses Sock.) This one is pretty big and will be nice and warm. The colours of reds/browns/purples/navy with go with a lot of clothes in my wardrobe too.

So anything else? We might want to revisit the Sassy Sweater. 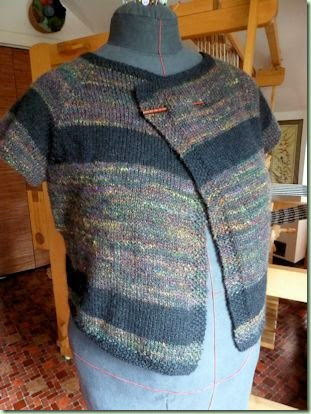 The colours are again not particularly accurate – the Rainbow Dark leftover handspun is quite a lot darker and more green than it appears and the Midnight Shetland is of course actually black. They are actually closer in value than the photo shows. The pattern is Sassymetrical by Gay Schiff, yet another free Rav download and my second version of it. I used 4mm needles for the garter edging and 4.5mm for the body. I made the neckline higher and tighter than in the original and went with the short slightly puffy sleeves this time. I had limited yarn to work with and the stripes were kind of added a bit randomly rather than being planned. I did a slightly longer body than the cropped pattern version but there were only a few yards left at the end so I cut it rather close. I’ve been wearing this one frequently ever since I finished it so I think it’s a hit!

Okey-doke. I think we’re all caught up now. I’m down to the heel flaps on the Antelope Canyon Socks. It’s been dark and raining off and on for days so no gardening got done. All I want to do is read and sew, alternately. Must be the weather.

Nice group of great-looking knitted items. You mix yarn colors very well! I'm jealous you can knit while traveling. I get motion sick if I try to knit (or read) in the car. You got a lot done on your trip!
Good luck on the Katherine Tilton top/vest. I made the other garment in that pattern, and it wasn't so bad. But the vest/top has so many pieces! Hang in there!

Fab scarf! And the other goodies too. You were very productive on your holiday travels.