I learned a valuable lesson yesterday. At least this time I hope it sticks. I wanted to dye some of the white Elann F05 sock yarn. (You knew I couldn’t keep from doing my crafty things for so long without being sorely tempted, right?) I thought this would be an easy-peasy low-water immersion bath with just acetic acid and Lanaset black dye. As you might know, Elann yarns come in these little puff balls: 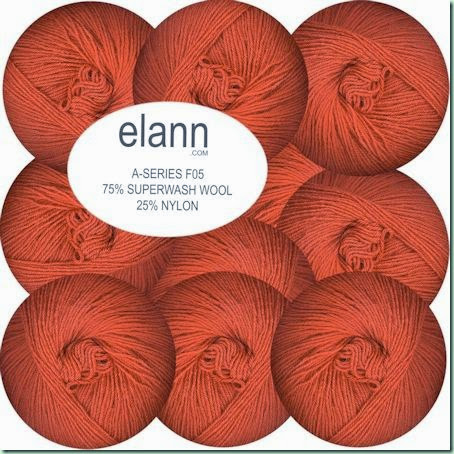 Somebody I read called the balls’ shape “tomatoes” though this photo shows the colour “persimmon” which is definitely what these ones resemble. My white ones look like marshmallows! I thought I could just dye them as-is since they’re loosely wound and mostly the dye should penetrate to the centre ok. I wouldn’t mind a little variegation just to keep the dead black from being boring. If I really wanted straight black, and if Amazon actually had any for sale, I might have just bought that and be done with it. But no. Work from the stash.

However, I forgot that the darn things disintegrate much too easily no matter how careful you are with them. I ended up with this: 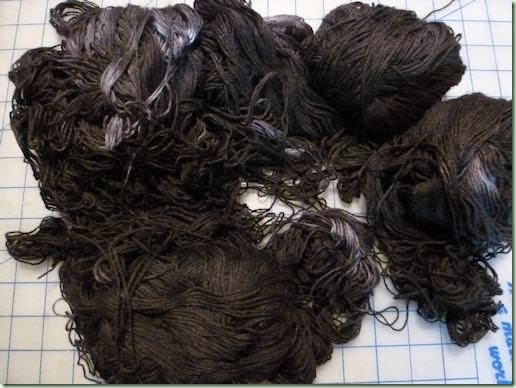 That’s 6 balls! Which took longer to untangle and skein than it would have just skeining it up in the first place. Doh. Also I’m not sure I like where the blips of light gray happen – mostly just on the second half of each skein – and not very evenly over the 6 of them either. Oh well. If it looks bad when I’ve knitted my sweater, I can always throw the whole thing in another dyepot and then it really will be dead black.

I used Lanaset black for this because it gives me the most true black of all my acid-type dyes. The washfast acid dye blacks (I have more than one) lean either a little blue or a little purple or a little green especially in the grayer areas. Lanaset (also called Telana or Sabraset) is totally the best black of any dye I’ve ever used. I used a nearly-4% depth of shade in total, though it’s hard to calculate exactly after I mixed up a little more dye because the centres of the balls were still too white. Black areas are very black! And the remaining liquid in the dyebath was pretty clear when I was done so none went to waste. Another good thing about Lanaset is that it exhausts pretty darned completely. Also superwash wool/nylon yarn sucks up the dye like a thirsty camper after a month in the desert! (Ask me how I know.)

Oh yeah, I’m sure you want to know which sweater I was planning, don’t you? It’s this lovely little cardigan, Trellis by Lili Comme Tout (aka Julie Partie). I found that I have a need in my wardrobe for a little black sweater and this one looks just right, particularly with 3/4 sleeves. I’ve already purchased the pattern through Ravelry and printed it out. Not starting to knit it yet though!

I did do a little bit of knitting anyway. See? 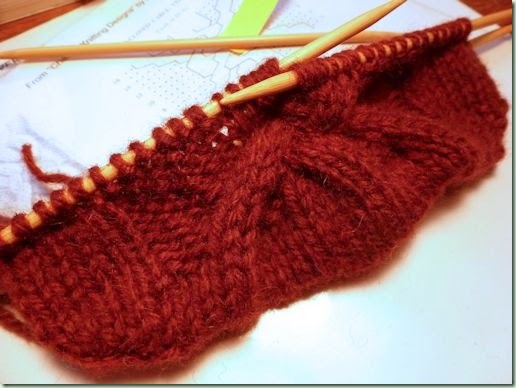 I started Nana’s Blodgie Sweater. We decided that Thom’s mom needs a hot water bottle to warm her feet in bed. She’s always complaining of cold but doesn’t like to use her electric blanket. She didn’t even know that they still make hot water bottles (now known in our family – thanks to me – as “blodgies” for the sound they make when filled) but of course they are even more popular these days when everyone is trying to save money on heating and electric bills. And who can just wrap the poor thing in a towel when it can sport a lovely hand-knit sweater? Not me. I like to try out different cables on each one I make. This one is provocatively entitled Enclosed Cable Variation II from Walker’s Charted Knitting Designs.

However, today my hand is a little sore from all that activity so I should stop typing and rest up. I’ll leave you with the photo of our Scheffmas Tree in full regalia: 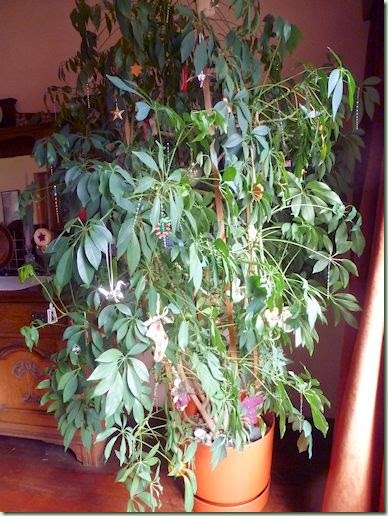 Every item has a story and most were made by us, family or friends, except of course the tin icicles from Lee Valley Tools. Also the basket on the front door is now filled with evergreen boughs from our neighbour’s tree (which blew over here in the wind storm last week) and decorated with sun, moon, and stars for Winter Solstice and a hilariously “nakey” angel doll, made by a long-ago friend. I’ll try to get a photo, although my decorating would not win any Martha Stewart awards!