Flowing Into A New Year

Hope everyone had a lovely peaceful New Year! Ours was fun but not particularly peaceful as spent with an 8- and a 10-year-old. We (that would be me, Thom, and the Biggest Grandbeasties) played Snakes & Ladders, built with K’Nex, watched movies (my favourite holiday show “Nightmare Before Christmas” plus parts of “Harry Potter and the Deathly Hallows” and “Back to the Future, pt. 1”, decorated ourselves with glow sticks and finally made it out to the front porch on time to yell Happy New Year and bang on pots and pans. We listened to the boats in the harbour (very loud!) and watched the neighbours’ fireworks (very pretty) and rather swiftly took ourselves to bed thereafter. We were all a bit groggy the next morning but revived somewhat after platefuls of my blueberry pancakes.

Then Princess Silverfang decided that Stargazer’s moon bears needed a baby so asked if we could make one. The original bear, Snuff, was a Gund “Snuffles” that their dad had since he was a boy so it’s 35 years old now. Stargazer asked for a wife for Snuff this Christmas so with the magic that is eBay they added Jessie to the family. She’s from 1989 so is 26. Obviously they’re both old enough to be acceptable parents, don’t you think? The creation of the baby was quite a production! Princess SF drew the original design and cut out the pieces from some fake fur I had in the stash. It was too hard for her to sew this stuff so I did all the sewing. We decided to use some shorter velour fur to make the ears and legs (much easier to sew) and Stargazer cut the moon out of some white fuzzy stuff. After sewing all the parts together, some machine-stitched and some that I had to hand-stitch, PSF stuffed it and I sewed up the tummy gap. She picked out beads for the eyes and I embroidered on the nose. Somehow it ended up looking more like a guinea pig than a moon bear but it’s cute! 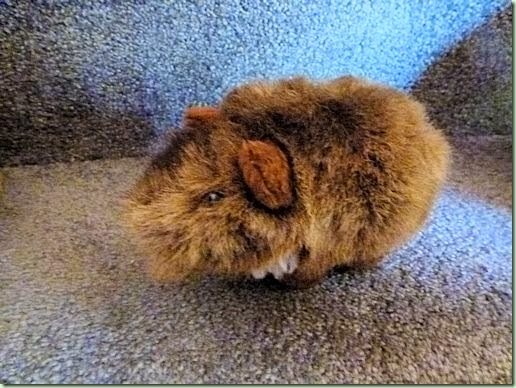 For a team effort and an improvised pattern, not bad. Princess Silverfang named her Sarah: 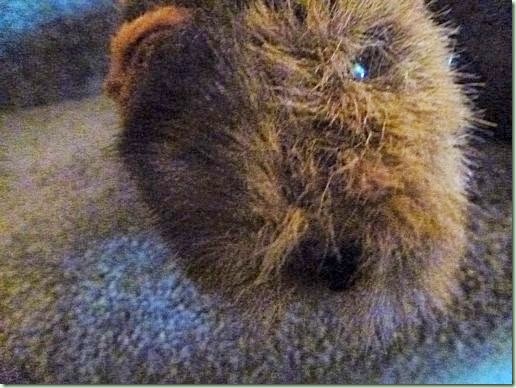 And here she is with her family: 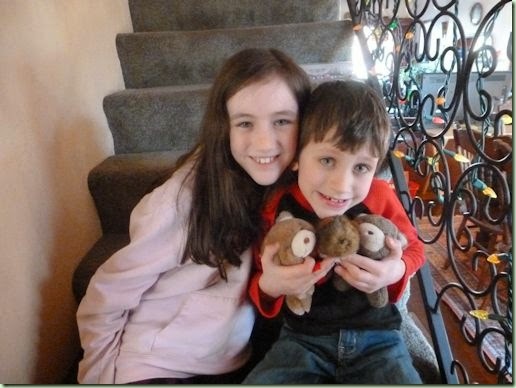 I also worked my newly-functional hands faster than the wind and actually finished Nana’s Blodgie Sweater in time to give it to her yesterday evening: 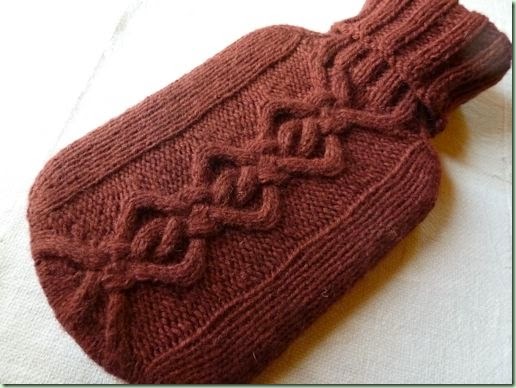 Because I didn’t have enough time to wait for it to dry I wasn’t able to give it a proper wet-blocking but settled for a thorough steaming and dried it in place on the hot water bottle. That seemed to work pretty well though it’s still a bit on the funky side. I’ll blame it on the hand issues, shall I? To say Thom’s mom was thrilled to receive her blodgie would be an understatement! She could hardly wait to try it out on her cold feet. Success. Oh, and just as I was typing this she called to thank me yet again and to say that it stayed amazingly toasty all night long. Yup! Sometimes the best gifts are the simple ones, huh?

Meanwhile, now that I’ve cleaned up all the mountains of fuzz from the creation of baby Sarah Moonbear, I can make some new messes in the studio. I have a whole basket of teased wool to card next. And there’s still two current knitting projects to peg away at. I’m sure I’ll dive back into sewing more garments again soon but right now I’m just going with the flow.

It’s a whole new year, after all! More soon. Naturally.

Sarah is adorable, and so are the G'beasties. Children make the holidays so much fun!
Love the hot water bottle cover. It looks great, despite not wet blocking it. Glad Thom's mother appreciated it.
Going with the flow is definitely the way to fly. Have fun with your projects!