The weather has been mostly nice for the last week or so and we hustled out to the “back 40” (that’s 40 FEET not acres) to get the veggie patch ready for planting: 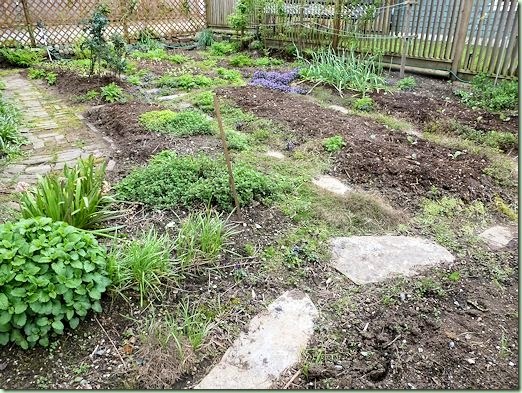 There was a lot of digging, weeding, smoothing, dumping of compost and deciding where everything will go. This little old lady was quite proud of holding up pretty well to all the physical exercise! Even The Hand cooperated just fine. Then typically, right after I got my little green things tucked into their beds: 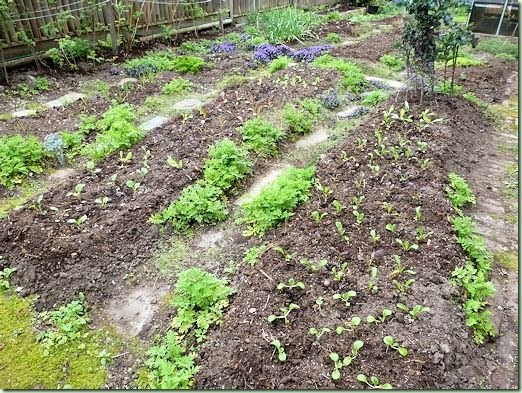 …the temperatures plummeted so now it’s colder than it was in February. Sigh. At least these are all the early spring greens (lettuce, arugula, mizuna, komatsuna, gai lan) and the cabbages and kale that should be able to take it as long as it doesn’t freeze. Since we’re nearly a month past our last expected frost date, everything should be ok. Fingers crossed that they don’t get slowed down too much or they’ll all bolt when it warms up again. Gardening is such a crap shoot, isn’t it?

Meanwhile, I’m still schlepping 8 more flats of tomatoes, Japanese indigo and numerous flower seedlings in and out of the basement every day. They can’t go in yet and I also can’t plant the beans until at least the first or second week in May. I have cukes and squashes coming up under the lights indoors too they will need to go out as soon as it warms up enough. Lots of work but worth it when we get to munch on the proceeds. We went to the local farmers’ market yesterday and there was so much produce there that we didn’t need to buy because we have our own! (We did get beets and chard and goat cheeses though.) I was so proud that my rhubarb was bigger than theirs that I immediately picked some when I got home and made sauce. The best over vanilla ice cream! Oh, and I also picked the asparagus and there’s enough for a meal. Yum.

OK, enough garden talk. In crafty news, I’m cruising down toward the hem of the Sweet Ginger Candelia cardi. It’s going very well without any major hassles and I even tried it on and it fits perfectly. Whoot! Why do some projects go so much more smoothly than others? This is going to break the speed record from yarn purchase to finished object for me for sure.

I also started a scarf but I’m not sure if I like it yet so the info on it is pending. I had a lot more success with another project which combines 3 different fine threads from my weaving stash which I’ll knit together to make a tunic top. I have the pattern and have already modified it slightly to fit me. I’m finding it very exciting that these silk, rayon and linen threads can actually be perfect to knit with if combined into a thicker strand and I had great fun playing with different combos. The results are so much better than the pattern’s recommended yarn which would have cost me about $140! Free is better, no? I need to get some photos of the swatches and the yarn cones. More on this one soon.

And I’m still spinning too and now I have about half the alpaca tweed yarn that I need for yet another sweater. (No, I cannot have too many!) It’s pretty fine yarn (about sport weight when plied) so even using the faster long-draw that’s a lot of spinning still to go. Pleasant anyway – at least now that I’ve had more practise with this slubby stuff. I have the pattern chosen and ready to go but I’m going to wait until the yarn is done first.

Still haven’t located my sewjo from wherever it’s hiding! I know I need some new clothes but darned if I can get motivated in the studio. Maybe when I get the garden more completed. All that digging saps my energy and all that’s left at the end of the day is only good for the mindless stuff. But that’s perfectly all right. It’s not a race to the finish. The sewjo will return. I have plans.

Back out to the garden while it’s not raining!