So. You'll be able to tell that I'm obviously still not back to sewing yet. I've been completely obsessed with knitting and having a ball - winding balls! Also stalking Ravelry and putting together yarns and patterns. Yes, I've purchased a few patterns. But I consider that a very small expense considering that I mostly knit from patterns I already own or from free ones. And I haven't spent any money on yarn. Succumbing to spinning fibre at Fibres West recently doesn't count. Heh. Especially since I've spun half of it up already. And look! I'm actually knitting with it too!

The Alpaca Tweed Cardi is currently my only knitting project and I'm challenging myself to put pockets in the Larch Cardigan pattern. It's a mind-bending puzzle! The sweater is knit bottom-up so first I followed the pattern and knit up 4" to the beginning of the sweater opening. Then I divided for the pocket openings and knit up just the centre-front pieces, decreasing for the slanted openings as I went and put the stitches on hold: 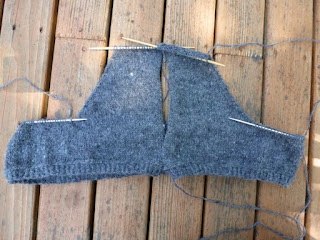 The rest of the fronts and back waited until I had knit the beginnings of the pocket liners up to the bottom of the opening: 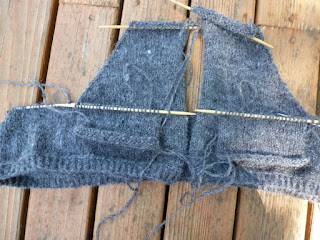 Next step is to join the liners to the main needle so I can continue to knit the piece up to the height of the pocket openings: 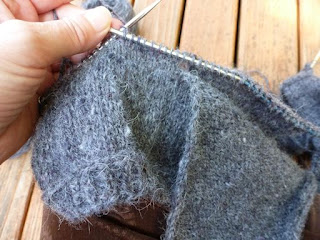 One liner goes at the beginning of the main needle and one at the end. They'll eventually tuck behind the front sections. Knit-knit-knit (working hip shaping at the same time!) up to the top of the pockets: 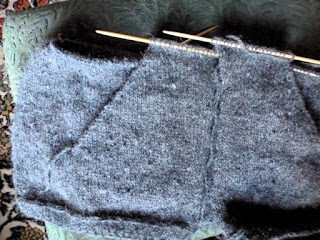 I'm nearly there. Then the whole shebang gets joined into one again and I'll carry on with the rest of the pattern. Later I'll stitch down the liners at the back and pick up and knit some twisted ribbing along the opening to finish it off. Easy-peasy, right? The things I will do for pocketses.

When I unravelled my Ribbon Sweater I ended up with about 866 yards of fingering-weight 2-ply wool. I'm calling it Black Raspberry: 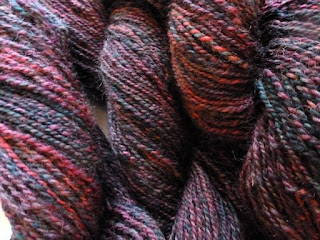 This is after I washed it to freshen it up and try to take all the wrinkles out. You can't really see it in the photo but there are several shades of red, black and kind of a forest green. I still haven't been able to track down the wool information. I don't even know if I dyed it myself or if it was a commercial colourway. Bad damselfly. However, I have decided what to make with it: the Low Tide cardigan from Tin Can Knits.

The other yarn that comprised the Ribbon Sweater was this: 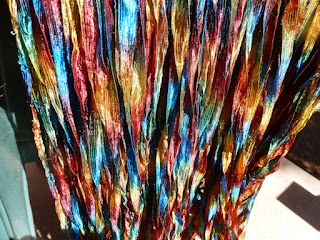 The actual ribbon. After having been knit and living in a sweater for 10 years it has softened and scrunched. I washed all the sweater yarn plus some that hadn't been used yet to see whether that would also soften up. Not so much. There's 2 skeins in the photo: used on the left and unused on the right. In a hunt through the stash I found 5 1/2 more unused balls: 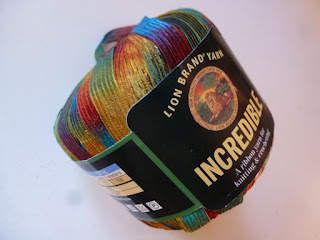 It's Lion Brand Incredible in the popular Copper Penny colourway. It's now discontinued but I have more than enough to knit a whole sweater. I thought I would try swatching for the Garter Stitch Swingy Sweater by Jenn Pellerin. It's a free pattern for an asymmetrical cardigan in garter stitch which could look cute. The colours blend really well in my wardrobe anyway. More on that when I get to it.

What else? Oh yeah. I balled up the Blue Star Ranch mohair yarn: 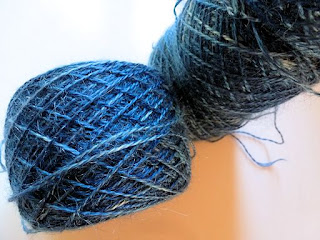 This yarn came from our late friend Max and his wife Hilde's farm from many years ago. It's been lurking around in its natural white state while I've never found anything I wanted to knit with it. There's 660 yds/255g and I've finally dyed it blue with indigo in honour of Blue Star Ranch. It's a little too prickly for around the neck even for me and I'm not particularly sensitive. I thought maybe a pullover knit on larger needles to layer over other clothes so it's not touching the skin. I'll try swatching for the Mohair Minimalist Top by Anna Kuduja and see what the fabric looks like. This free pattern is in only one (small) size but I'm sure it will be easy to adjust since again it's knit top-down.

The queue is getting quite long now! I need to learn to knit faster, huh?

Oh, clever you! I must getting something on the needles soon, your pictures give me itchy fingers -in a good way!

Excellent! I aim to enable. ;)