Thanks to El Niño, we’re having above-seasonal temperatures and below-average rainfall. It’s been soooo hot! Yeah, I know for some places 30C (86F) doesn’t really register as particularly warm but for us here in the Land of No Air Conditioning it’s melting. OK, I admit that some offices, shops, malls, movie theatres and cars have AC but most private homes don’t. We only maybe have a few weeks out of an entire year when it’s really needed. So we just suck it up, aim a fan in our general direction and suffer think cool thoughts. It’ll be back to normal again soon enough. Though the forecast says there’s no end in sight. Yet. Although it rained a little today. Not enough to actually water anything but it did make me drag knitting and my drying dye flowers inside.

Yes, I decided to pick the dyer’s chamomile and try it out. I’ve been hesitating because I’ve only had the plants for just over a year and I was concerned that they were the “Sauce Hollandaise” variety with white flowers so I didn’t think they would have enough yellow dye in them to work. But according to Harald Böhmer in his book, many of the white chamomiles have good yellow so why not these ones? So I’m attempting to collect enough for a test skein and it’s not a particularly fun exercise. This year the dyer’s chamomile sadly has lots of aphids on the stems with their attendant ants. Truly it’s a bad year for aphids on a lot of things. Ick. I chopped the stems down about 6” in hopes of eliminating some of the aphids and also encouraging new buds. It also made it easier to snip the flowers off the tips. (Picture aphid-gooey kitchen shears and ants running all over my hands and up my arms. Nope, on second thought, better not.) I hope some dried aphids won’t affect the dye colour! Happily the ants bailed out as the flower heads were drying outside so luckily I didn’t bring them in too when it started to rain.

Speaking of the book Koekboya: Natural Dyes and Textiles: A Colour Journey from Turkey to India and Beyond, I took it out of my guild library for the summer. This is the third time I’ve borrowed this book and it’s really starting to make much more sense now. The first time I read it I was overwhelmed by the chemistry and thought that many of the dyes discussed were only specific to Turkey. But now I seem to have acquired enough experience and read enough from other sources for the detailed information in this lovely book to become much more clear to me. Sadly I don’t own it myself - though for a mere $129.95 Canadian I could get a copy from Maiwa Supply! Nevermind. I’ll just borrow it again if I need to.

What else have I been up to? I finished my Alpaca Tweed Cardi: 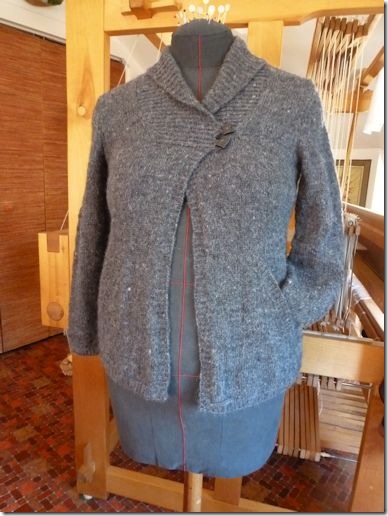 See how nice the pockets worked out? 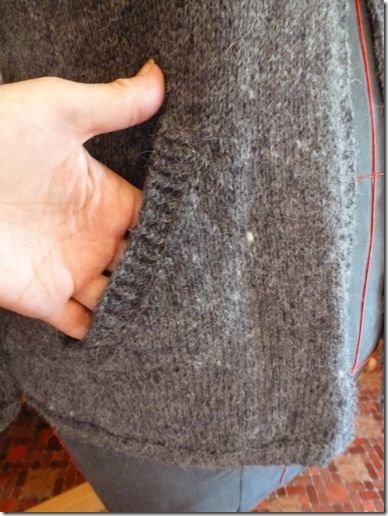 Though as I said before, the pocket lining could have been a little wider. And I used two of the carved bone buttons from India that I bought at Maiwa’s recent sale: 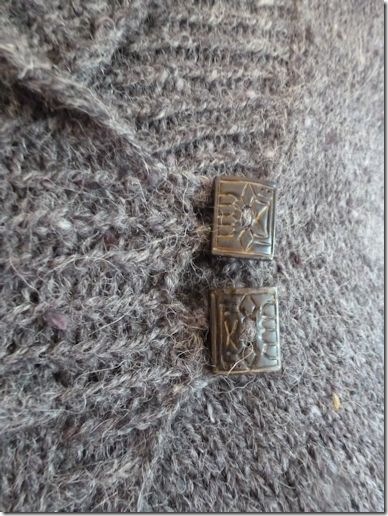 The collar is really nice and high so I won’t need to wear a scarf with it. I can also wear it unbuttoned: 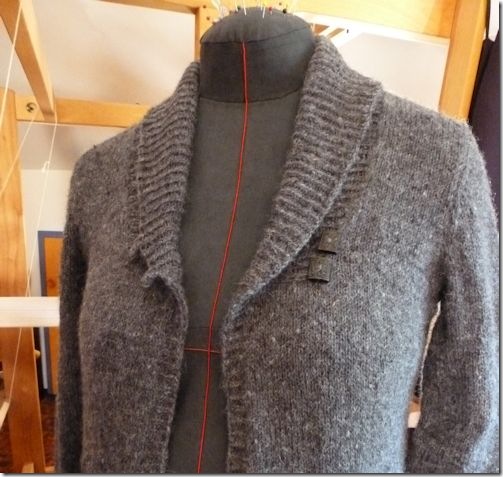 The pattern is the Larch Cardigan by Amy Christoffers and the yarn is my handspun alpaca/wool tweed. I only used about 325g/approx. 1100 yds so I have nearly 200g left. I have a shawl in mind, with beads and I’ve found the perfect ones for the project. There may be enough yarn left to make another hat too. I’ll be well-outfitted for fall.

I seem to be on a sweater knitting kick these days. No socks! I figured my sweater collection needed enlarging and there’s no room in our drawers for more socks anyway. So to give a little concession to the summer season, I’m plugging slowly away on the Periwinkle Necklace Cami. It’s taking even longer than it should because I made a boo-boo and forgot to reverse the cables after the midpoint. Doh. A little trip to the frog pond and we’re back to where I screwed up. It’s getting easier. At least I can listen to podcasts while working on it now. I can hardly wait to get to the larger needles and the stockinette body!

Because the Periwinkle was impossible to work on while watching TV, I started Low Tide by tincanknits. It’s kind of a vest-ish short-sleeved cardigan and I’m knitting it in my recycled handspun Black Raspberry Wool. Thom referred to it as Red Tide when I told him the pattern name so it stuck. I also can’t decide what kind of garment it is so I’m adding Vestigan to its name. I’ve only done the right yoke so far. More to come on this one. You will note that I still only have 2 knitting projects on the go: one easier and one harder. I’m controlling myself from casting on more items from my Ravelry queue.

In sewing news, I cut out a couple of dresses but it’s really too hot to work comfortably up in my studio in the afternoons. These could take a little more time to get done. However I’m feeling quite enthusiastic so who knows? More about them next post.

Thanks, sweetie! The yarn was a bit of a PITA to spin in the beginning but it all worked out great in the end.

I like your sweater but LOVE those buttons!!! And I wouldn't worry about the pockets, they'll stretch a little when you use them. You sure are being productive right now - what's going on???? LOL And talk about aphids?? You should see my Nasturtiums. And they're in a hanging basket. But the aphids found them.

Thanks, Sharon! Maiwa has such an amazing collection of carved bone and horn buttons in all shapes and sizes up to huge. They are out in bowls and heaped in drawers and you get to dig around in them like a treasure hunt. Fun! Danielle, manager of Maiwa Supply, told me that they actually bought way too many just to keep the carvers in India busy making them. I'm always happy to spend my money at shops with this kind of attitude!