I have been busy in the studio! Sewing!!! The dry spell seems to be over and my sewjo is back. Yay! It actually took me a couple of days to sort out all the heaps of fabrics and patterns. Some things have changed their minds about what they want to be – again! That’s what happens if I give them time to think about it. (Or maybe it’s me doing the thinking?) Anyway, if left to their own devices some pattern and fabric combinations tend to change partners. It’s quite confusing. Obviously I have to sew faster.

Another problem is that some of my sewing skills are a little rusty. It’s been awhile, OK? Ummm…something like no sewing since last October? Oh, I’ve messed with patterns and organised piles and maybe even mended a little but I haven’t actually sewn a garment for over half a year! Yikes. Anyway my latest make has a neckline binding that’s a tad loose. It’s quite wearable though. Here is my Red Squares Tunic on Debbie (as usual): 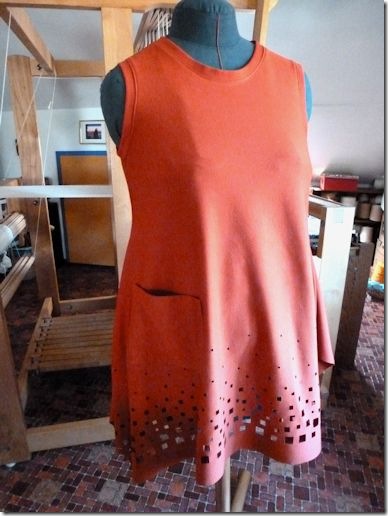 Sorry, the lighting wasn’t great either – it’s one shade of deep orange-red all over, not dip-dyed as it looks in this photo. And yes, the fabric had those cool square cut-outs in a border on both selvedges: 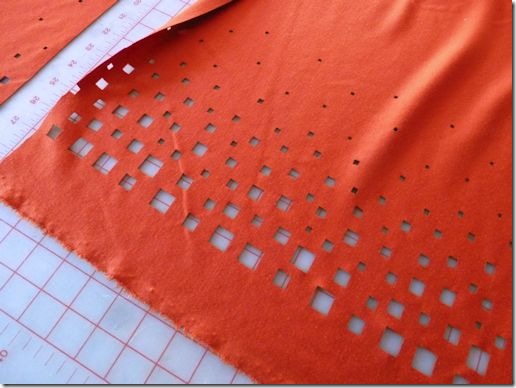 I think this photo shows the colour a little closer though it’s just slightly darker IRL. My old point-and-shoot camera doesn’t like to do reds properly sometimes. I got this piece of “designer” poly interlock the last time I went fabric shopping in Portland at Mill Ends. It was fun trying to figure out what to do to show off the border “lace”. I’ve already drafted my own version of Marcy Tilton’s now-OOP V8582: 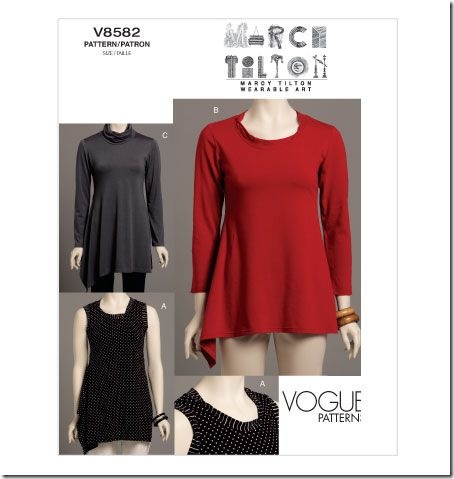 I wear the first version from last year that I sewed in a charcoal knit so much. So this time I just added the drape on both sides, instead of only on the right. The hem is straight and I didn’t finish it but just left it raw. I kept the neck binding simple this time because there was already enough going on with the cut-outs. And I stuck a pocket on because not having a pocket handy drives me nuts! It looks straight while wearing but it’s actually at an angle to the hem.

Now to keep the momentum going. I’ve already ironed the fabrics and am starting to work on the pattern for my next make, another Marcy:

Vogue 9112. I LOVE this dress. It’s so me! And it can be made in quite crisp fabrics like the mid-weight broadcloth and batik quilt cotton fabrics I have in mind. More on this project soon.

In knitting news I’m finished the body of the Alpaca Tweed Cardi. It just needs the pocket borders knitted on and then the pockets stitched up. I’m most of the way through one sleeve and halfway on the other. I did end up frogging the first sleeve back to about 3” left before trying again to get the increases spaced properly. It took a stitch marker and a counter to remind me where and when to increase. Doh. Once I gave in and got organised it zipped right along without incident. I blame ABS (Aging Brain Syndrome). These sleeves are knit from cuff to shoulder, partly flat and partly circular and then they need to be set in. It’ll be awhile yet before I’m done this sweater but it’ll be a lot longer before I’ll be able to wear its alpaca warmth anyhow!

I also promised a peek at the Periwinkle Cami: 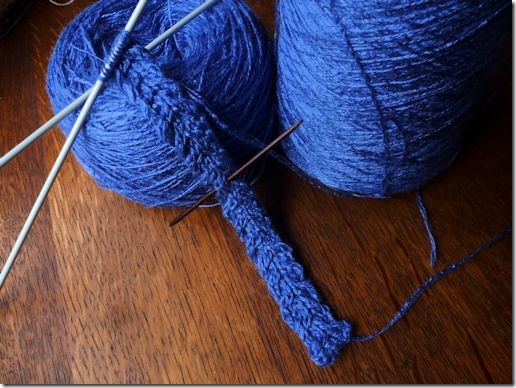 Not much so far, eh? Just part of one strap. You knit start at the centre back, knit the first strap, carry on increasing cables to the centre front, then decreasing to the second strap and around to meet the beginning where the two ends are grafted together. The photo is just a little darker than the real thing but it’s such a pretty blue-violet. This “necklace” part is fiddly and takes concentration. Once that’s done though it should go much more quickly.

There’s several other knitting projects clamouring for attention too but I’m ignoring them for now. I’m really far behind on my garden tending chores but, now that my hip is feeling much better, I’m going to have to get back to it asap. We’ve needed to water nearly every single day – except today because it actually rained yesterday evening. And harvesting goes on: 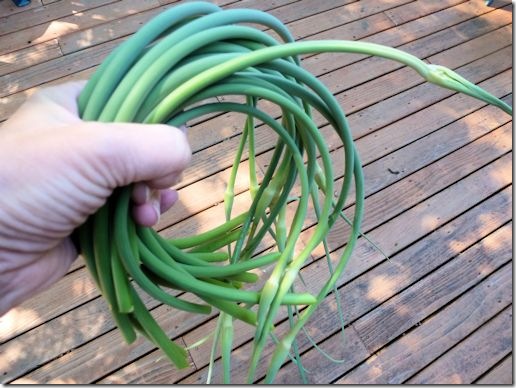 That’s a bundle of my garlic scapes. Aren’t they fun? They are also delicious especially in stir-fries, egg dishes, mashed potatoes and pasta. They add quite a garlicy punch to a salad if you chop them very fine. There’s lots of recipes for scape pesto too but I haven’t tried them. The scapes keep well in the fridge for at least a month or more or you can chop and freeze them. One of the best perks for growing your own hard-neck garlic. And you even get regular garlic bulbs too! Win-win, I’d say.

Moving right along. Gotta go get some grub in for our Family Father’s Day BBQ and Car Free Day Walk on Sunday. Just our kids and the grandbeasties. It’ll be fun.

Hooray for scapes! Unfortunately my partner is allergic to sulphur so can't do anything in the onion family. I can only indulge if he's away. (time to get outta town, James!)
And I love that Marci Tilton dress - great neckline. Your red tunic looks very cool as well.

AT LAST!! Some color in your basic wardrobe. I told you how great you looked in RED a long time ago. And that BLUE sweater. Yumm. The monochrome wardrobe is okay if you attach some WILD to it somewhere. LOL I've often thought about an all Navy or Dark Grey theme to set off my hot pink tops, earrings, amethyst ring, red shoes, wild socks & Color Craving scarf.

Told ya you'd like this one, Sharon! LOL!!! Thanks for all the kind comments, my dears.

Sorry about James' allergy, Heather! No garlic or onions would really suck.