Working like a beaver here trying to get things ready to leave at the crack of dawn Sunday morning. When we have a house-sitter I always want things to be just a little bit cleaner and nicer for them. You know how it is. Anyway we have 2 floors done and dusted (literally), the top one of which is my studio and study, aka The Sweatshop, and the basement which houses the laundry, dye studio, wine-making cellar, granny’s grow-op and the woodworking studio. Next up is the main floor which of course we’re still using – to pack and to live in for the next 3 days. Also this includes the rooms that take the most work to clean – the kitchen and the bathroom. They are also the ones which we need to use right up until we step out the door. And of course I would like to tidy up the garden too, at least a little. Hey, I’m tired just typing all this.

Speaking of gardens, the scrats squirrels are now munching on my zucchinis and anything else they can get their paws on. I give up. I’m picking what I can and leaving the rest to fend for itself. We’ve tried an animal repellent and if it worked at all it was only short term. Hard to tell really. At least the heavier net bags that I put over the grapes helped keep them safer. There’s a few bite marks (could also be rats) but the majority are still edible. Yay! At least one strategy worked. This is the first year in ages that we’ve had more than a couple of grapes from our vine. I’ve figured out the type of vegetable net that works best (finer mesh but thicker strands) so I’ll be saving those up for future use.

Enough complaints. So lets have some FOs now, shall we? First up there’s the regular indigo/Japanese indigo dyeing that I did a couple of weeks ago. On top is my favourite piece, the Mokume (it means wood grain) Moon Hankie: 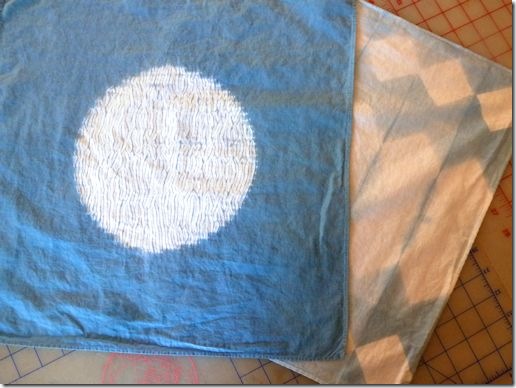 This was really easy: draw a circle and cover it with straight lines about 1/2” apart. Stitch rows with straight stitches, gather tightly, tie and dye. The other hankie is the only one I did with the itajime (folded and clamped between two plastic squares) technique. The others were all stitched shibori except for the “bubbles” hankie that was wrapped around a string which was then tied in a donut: 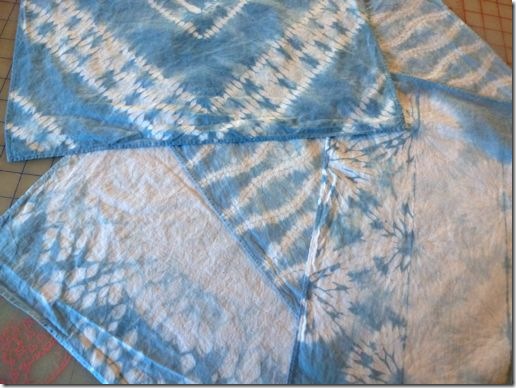 I didn’t get particularly good penetration of the dye even though I massaged everything under the dye surface and left it in adequately long enough. I still love these hankies though. Very classy to blow one’s nose on!

And here’s the Amiga Sweater in slub rayon yarn that I had originally dyed in my Japanese indigo and this time overdyed again in regular natural indigo: 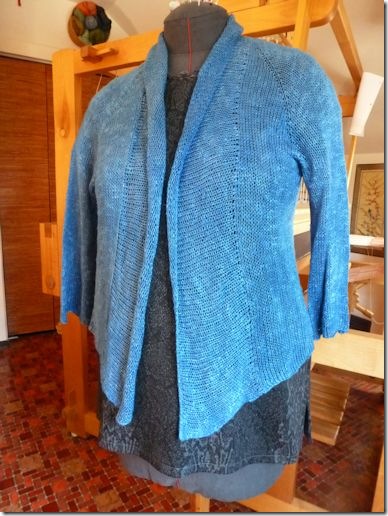 It’s a few shades darker now but not as dark as I had hoped. And ditto for the scarf, handwoven in India, that I also overdyed: 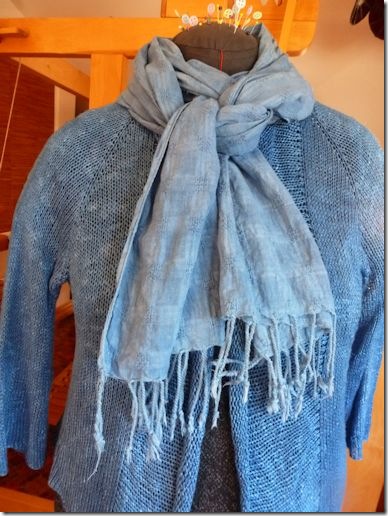 I promise to leave these items alone now and just leave them be the colour they want to be! Enough already.

Also you might remember the 40+ Blogger Meetup adventure where I purchased this batik quilting fabric at the Cloth Shop on Granville Island: 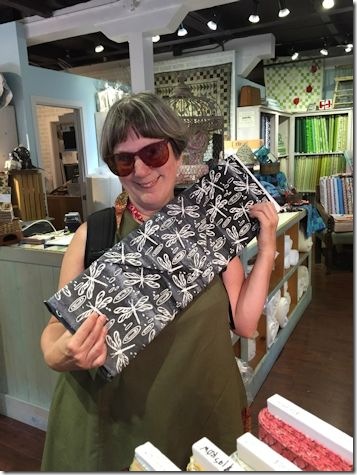 And here is the finished Damselfly Vest: 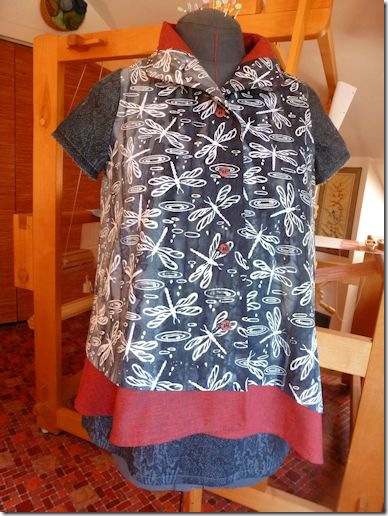 Was that sewing-up speedy-quick or what? See the back where I added a little pop of red on the field of cavorting damselflies: 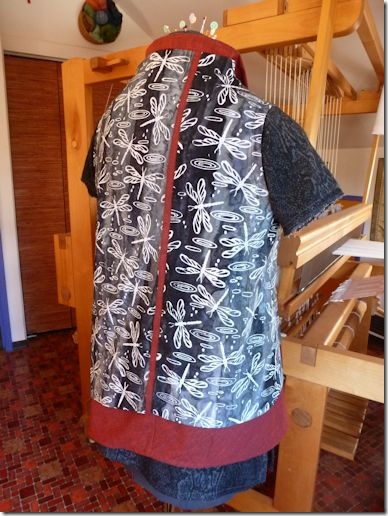 The buttons and the red contrast fabric were lurking in the stash for millennia. (OK, at least since the last millennium!) It was already cut into an Issey Miyake shirt that wouldn’t fit me now but the pattern pieces fit perfectly so I didn’t have to jigsaw them together. The pattern is Katherine Tilton’s B5891 View B: 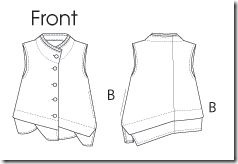 Because I’ve made this before it already has my shoulder and armhole adjustments. This time I lengthened the body 3” by creating my own lengthen/shorten lines on the pattern pieces since there weren’t any printed. And again I left out the tucks on the peplum. I like this length much better than the original which I always want to tug down.

You might not notice but the right side pieces (both front and back) are cut with the damselflies flying upside down. Of course they could definitely fly that way but can the drops of water fall up into the pond? To be honest, I didn’t notice that the print was directional while I was cutting it out. I was just trying to fit the bazillion pattern pieces on a rather small length of rather pricey fabric! Now you can’t un-see my kamikaze damselflies, can you?

I even got an unsolicited compliment on this vest on its first outing today from a shoe shop salesperson. I think she was a bit shocked when I thanked her and said that I’d made it. Oh and then I saw the shoes to covet! Unfortunately $210 (on sale even) was too much for my meagre budget. Of course now I can’t find the brand but they were I think Dutch-made? I’d describe it as a rubber-soled black leather flat with a multi-strapped ankle band that fastened with velcro. Not enough support or padding for me but adorable anyway. Sigh. I’m just too picky about shoes. They have to be a little bit fun and funky. They have to fit properly. They have to have proper support. They have to be very flat. They have to be reasonably affordable. And I have to find them locally because I won’t mail-order shoes. Doesn’t leave a lot of choices there.

Nevermind. On with the show. We got an official refund for our campsite reservation in Kettle Valley. Apparently much of the campground is still there but it’s a little singed around the edges. The fire is still not contained. The guy who threw the cigarette out the window that started it all should be…think of something suitably nasty as punishment. And double it. We aren’t sure where we’re going to end up on Day 1 but we’re going anyway.

So here’s hoping I have all the navigational aids that I need to get us where we’re going and home again. Chances are I won’t be getting much in the way of wifi anywhere. (We’ll be lucky to get an occasional hot shower!) It’s actually kind of nice to be un-tethered for a month or so. (Yes, I keep telling myself that so I don’t start twitching!) If I can post I will but if you don’t hear from me for the duration, not to worry – I’ll have a metric tonne of things to babble at you about when we get back at the end of September!