We left off this interminable travelogue in the middle of Utah, didn’t we? After Capitol Reef, which is pretty much in the middle of nowhere, we needed an in-between stop on our way to Antelope Island, north of Salt Lake City. So we decided on one that we hadn’t been to before, Palisade State Park. It’s just about at the halfway point and was adequate for an overnight stop. There’s a popular golf course and a small reservoir lake for boating and fishing – none of which we were interested in – so we settle for a comfortable walk around the lake and a very lukewarm, though free, shower which was much-needed at this point. From our lake-view campsite there were lots of birds to watch, including white pelicans and great blue herons. And a lovely sunset: 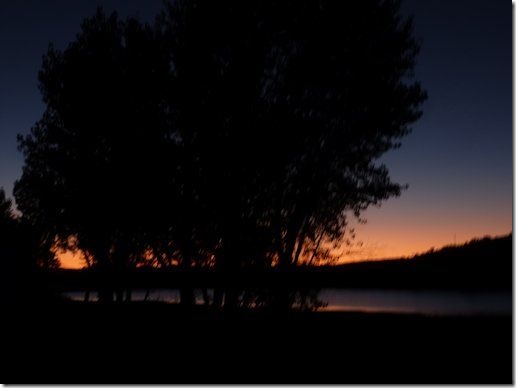 Next day was a busy one. Last time we drove up the I-15 through Provo and Salt Lake we decided that next time we would be sure to visit the Timpanogos Caves. It’s pronounced “tim-pan-O-gus” if you were wondering and it’s actually a very large mountain topping out at nearly 12,000 feet. The cave is a National Monument and the mountain is under the US Forest Service, with many trails and campgrounds and a scenic road which we travelled on partway up the American Fork Canyon. (The campsites were of course full!) Obviously we’ll have to go back some time and explore further.

But meanwhile, the cave trip was an adventure! You have to first climb up a mile-and-a-half of incredibly steep, although paved, trail. At altitude. The rise is 1,092 feet and you end up 6,730 feet elevation at the cave entrance. Whew! The views are amazing on the way though: That’s the city of American Fork way out there in the distance. And this was only about halfway up. I was totally red-faced and huffing like a steam engine by the time I made it up to the end of the trail. It was a good thing that we’d had all that prior practice of hiking uphill at altitude! Or it would have taken me a lot longer to get there. As it was we were actually early for our tour so we ended up being invited on an earlier one with a delightful guide named Bryce (“like the canyon”). This cave was an interesting set of 3 different systems joined by man-made tunnels: 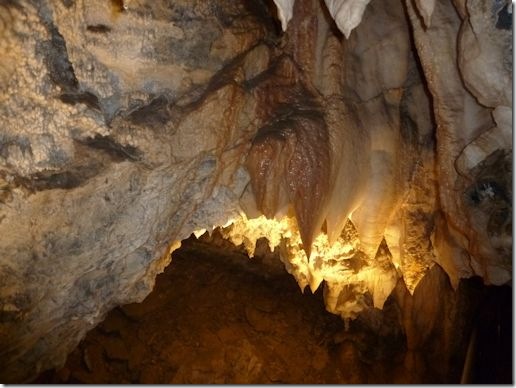 They had lots of really lovely formations including lots of rare helictites (like little stalactites but growing in wonky directions) and of course, the magnificent Heart of Timpanogos: 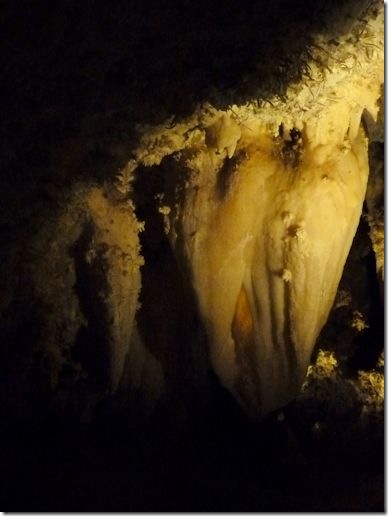 It’s a huge stalactite situated in its own little grotto. So amazing that it has inspired legends! I like it that every cave system we’ve visited has a different beauty. This one feels really intimate because the passages and rooms are mostly quite small and everything is very close to your eyes. Totally worth the hike up! Not to mention the hike back down again. Easier going that way but a tad hard on the old knees.

So after wearing ourselves out caving, we finally got to Antelope Island. Because it was a weekend and the main campground was full, we got to stay at the overflow area at White Rock Bay. There’s no water available and only pit toilets but we were nearly all by ourselves in the middle of the dry prairie with a lake view. Complete with bison. We woke up on the second morning with several of those big scary beasts this close: 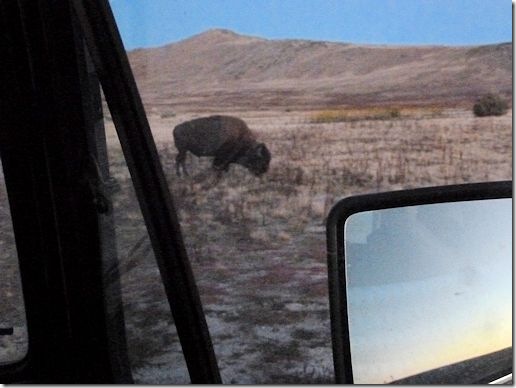 Actually even closer. Thom had to sneak out of the van and around behind to fetch our waste-water container, sneak back in and back the van slowly away just so we could find a bison-free outhouse! It took two tries to find one too. Those bison were spread out everywhere. Talk about adventures, eh?

While we were on the island, we drove south as far as the road went to visit Fielding Garr Ranch. It was established way back in the mid-1800s and still was a working ranch into the 1980s. Today it’s a museum though they had horses in the corral on this visit. Of course I was most interested in the sheep shearing barn: 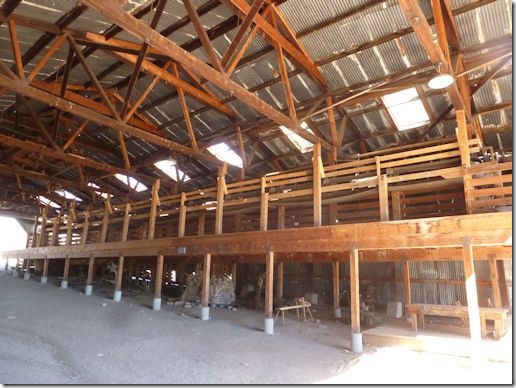 Stations for lots of shearers to work up above there at once while others fed the sheep in to the narrow corridor at the back with individual holding pens for each shearer. There’s a conveyor belt to take the fleeces down to the end where they popped right into a big bag. At one time there were as many as 10,000 sheep that needed to be shorn here! The ranch also has many displays in the buildings showing how the families lived and worked on the ranch. There’s a grove of some of the only trees on the island here fed by a spring and high in one tree we found: 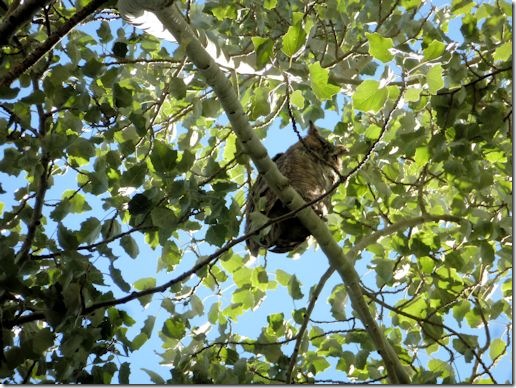 This big horned owl! Isn’t she lovely? She gave me a great stare while I was trying to zoom in on her.

Next we were off north again and a little east into Idaho and Craters of the Moon. We’ve been here before several times but camping in the lava just doesn’t get old: 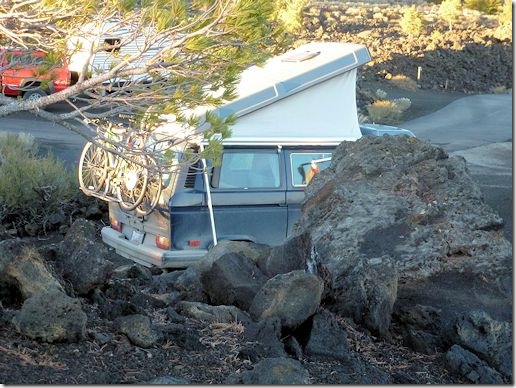 See how dusty and dirty the poor van is? Not to mention the bikes on the back. I didn’t yet mention the fact that we managed to forget the keys to the Bionx batteries for those bikes. Doh. That meant that we basically had regular bikes. Or at least Thom did. He managed to hook my battery up without locking it by wrapping it in with bungie cords but unfortunately he couldn’t do that with his differently-shaped battery pack. So I got to zoom up the hills while he had to peddle. Oops. And the loop road in Craters is a perfect place to cycle with very little traffic and a nice smooth surface. We visited the usual sights, especially the lava tubes (after getting our free caving permit). We did remember to bring the caving headlamps! Though you don’t need them for Indian Cave because the roof has skylights. My favourite part is the exit: 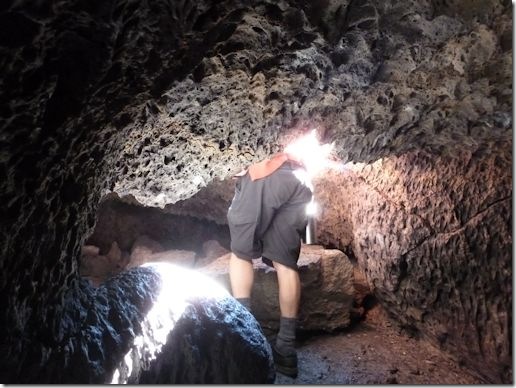 You climb out this little hole and then you have to walk back across the pa-hoe-hoe (luckily smoother than the jumbled a’a) lava following metal stake markers to the trail. Fun!

We also climbed into Boy Scout Cave to see if the ice was still there in the corners. Yup, it was. That one’s a bit tricky to get into but Beauty Cave is easy because it doesn’t go very far anymore since part of the roof collapsed. Gee, I’m glad I got over my fear of caves! I used to be terrified of being underground. Now it’s only underground parking lots that give me heebies. Real caves – no problem. Go figure.

Well, this is getting pretty long. I’ll continue next time with the last two states, Oregon and Washington.

Meanwhile, I finally finished my last pair of socks while chatting last night at our very enjoyable Thanksgiving Dinner. They were almost done on the way home from our vacation but seem to have taken forever just to do the ribbing. And I’ve already started a new knitting project plus begun spinning wool for what is going to be a rather long-term project. (Hint: fine yarn/large garment.) I’m still organising my next sewing projects but I expect progress on that front very soon. I’m mostly enjoying being at home. It’s raining. That always squelches any desire I might have to be anywhere else!

Well! Since everyone else is saving their comments for the end, I'll comment here. It's not too long but too short!! I'm enjoying your journey once again. I always wanted to visit caves, geysers, weird holes & hike through the prehistoric wilderness but I have to do it from an armchair now. You just need to take more pictures, dammit.

So how many hundred photos would you like, Sharon? Sorry I can't put them all on Blogger! I was just aiming for the highlights.