There's something about this time of the year that brings out the mad maker in me. I no sooner finished one knitting project when I started three more! That makes a total of four all going at the same time. Yikes! A little over the top - at least for me. I don't usually have more than two.
The Stripey Sweater is coming along. I'm using all of the "Dye For Me" yarns that I recently stuck in a number of natural dyes. The main colour is the madder dyed wool and there's seven paler contrast colours in the alpaca/tencel/bamboo. I had a problem at first with the one stripe of fair isle that I decided to throw in. The contrast wasn't great enough and I had almost forgotten how to knit stranded. My tension wasn't helped by the dense and non-stretch nature of the yarn: 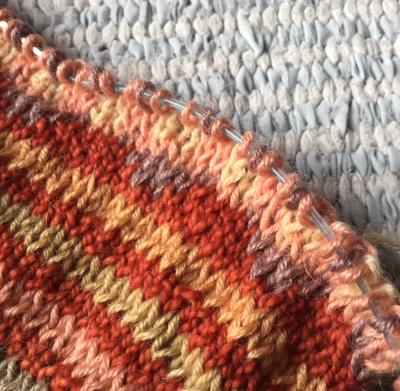 You can see where the peach and yellow are too close in value. So I frogged and tried again: 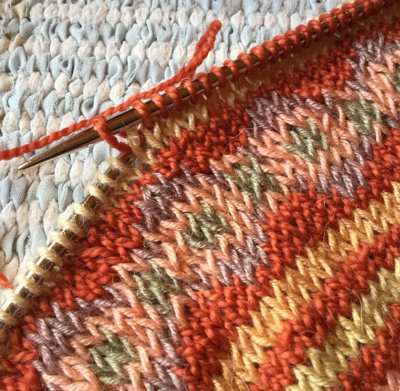 The gray-green is better. But of course once I was much farther along I realised a better option! Too late. It will have to stand as is though I'm hoping the tension evens out somewhat after blocking. Debbie Double thinks it fits fine so far: 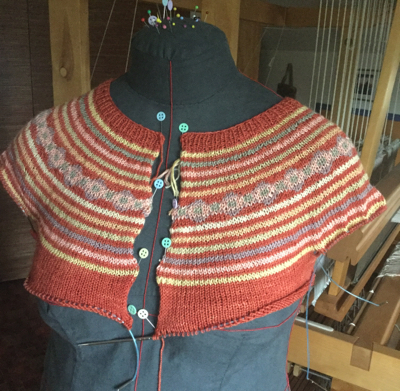 Now I'm cruising down the body which is the relatively easy part. And I found the perfect buttons! These are handmade ceramic in various harmonious colours and they've been in the stash for decades. Nice to find a home for them! Don't they match the stripes nicely? I just have to decide how many to use: 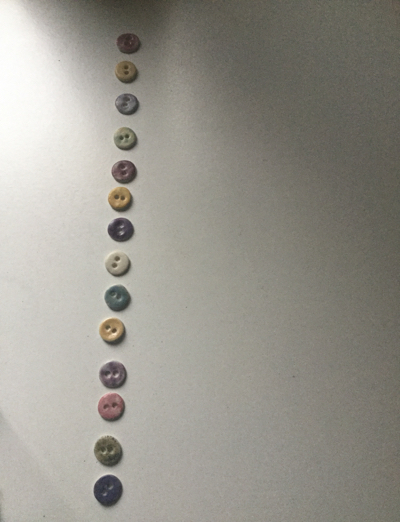 Guess I have to knit the buttonholes first, eh? Knitting on. More on the other projects when there's something to show!
And I have the results of the Lobaria lichen exhaust bath that we did last Thursday at our Spectrum Study Group: 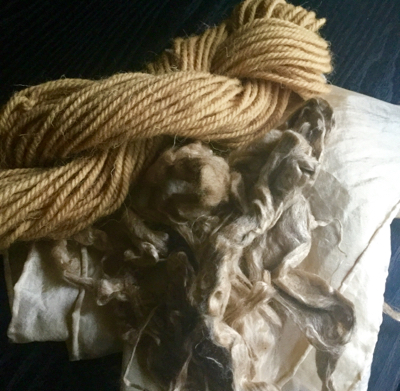 There wasn't a huge amount of colour left in the pot so obviously my superwash wool and nylon sock yarn did a great job of sucking up the dye. This time the wool of course took the most and gave a honey gold. The silk habotai scarf is actually a soft pale gold and the tussah silk fibre just deepened a little. Not exciting but it's good to know that there was no dyestuff wasted.
Things are finally back in production in the studio. I've started sewing again. Yay! The first off the starting line is another version of Marcy Tilton's Cirque Dress, V9112. This one is a mishmash of a cotton print (quilting? home dec?) that's been in the stash for decades and, in a reprise of my first version, the hem "bubbles" and collar facing in a contrasting black rayon which has also been lurking for eons. I'd call this one a freebie, wouldn't you? The fabrics are quite lightweight so it's really more of a spring/summer garment but maybe I can get some wear out of it with a warm top and tights. We'll see. Anyway, it will be another item off the To Sew list and a Stash Reduction as well. There are still several more fabrics all cut out and ready to sew. Again, more when there's something to show.
Speaking of sewing, I'm planning to go this year to the Sewing & Stitchery Expo in Pulallup, WA, at the end of February. Our Canadian dollar is sadly in the basement but I've missed the last couple of years and it's only a four hour drive (not including the border crossing). I plan to mostly just look anyhow and soak up the creativity fumes. And then if the weather is more-or-less cooperative we can head further south for a few days. Or if not, come home. It'll be fun to run away for s short while anyway.
Lastly, as a teaser, I just got several new books in the mail which I will want to discuss: knitting, dyeing and sewing. Next time!