The Neverending Warp is finally off the loom! If you'll recall, I started this placemat project nearly a year and a half ago but injured my hand very soon after beginning to weave. And when my hand was finally well again I was busy doing other things. It sat there taunting me but it was really hard to get up the interest level to get back on the bench. Instead I did everything else but weave: knit, clean, garden, paint doors, sew, sew and sew.
However my guild decided to organize a tea towel exchange and I had the brilliant notion to join in to push myself to finish up the project languishing on the loom. Or to cut it off! Of course I can't waste that warp so I finally jumped in and just got 'er done! It was surprisingly hard to get a rhythm going again, to find the treadles with my feet and to make even beats and neat selvedges. It didn't help that I had planned to use different treadlings and wefts for each mat! I played along with that decision through the second one (which I had already started) and continued limping through he next couple of variations. By the fourth one I realized that I was losing interest again so just did borders with plain weave in the middle. The fifth one was the charm though. I liked the results and it wasn't hard to weave. I was finally getting some of my skills back. So I wove the last four (out of eight) the same. So now I have four totally different mats plus a set of four matching ones. Done.
The big cut-off: 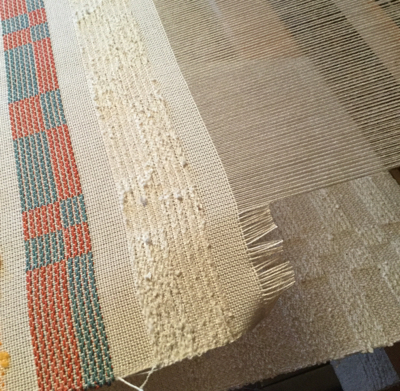 I wove a minimal sample of each structure at the end of the warp for my notebook. 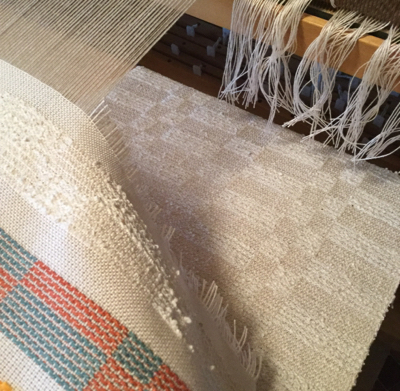 So nice to finally take the shears to this beast! 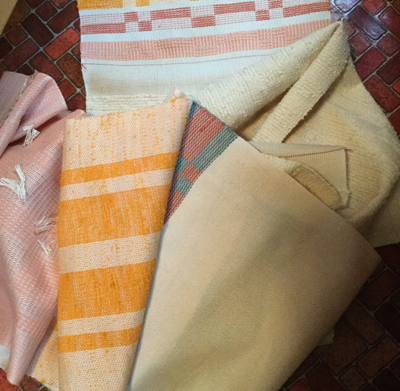 Unrolled off the cloth beam. 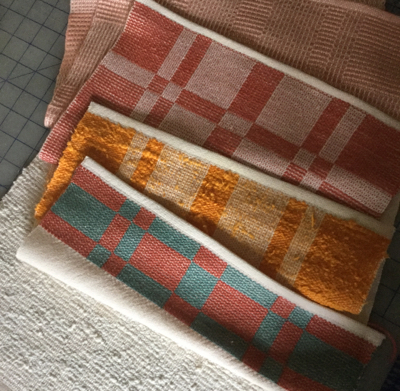 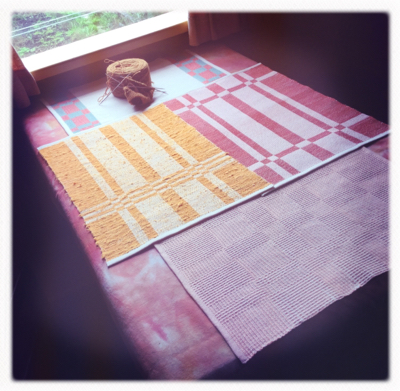 There are wonky selvedges and at least one treadling error that I tried to fix. But they are done! Now I can move on. Next project: inventorying my yarn stash! I needed to shake up the stash anyway. It's getting dusty and dirty and I actually found m*th evidence in one basket! Yikes! I found an easy to use app for my iPad so more about this soon. However I'll leave you with this image of a small selection. Perhaps there's enough there to weave a blanket? 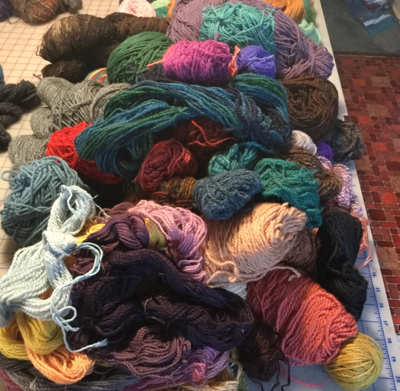 congratulations on finishing the warp, I know that bogged down feeling and the great relief when you finally pick up the scissors. yeah! they look great. then you went and scared me talking about stash

Oh, sorry to disappoint you, my dear! I will definitely be talking stash. No feeling guilty though, OK? Stashes are good. Are good...are good...are...good...

And you're actually going to use them after all that work?! amazing, the things you do, Louisa.