Now that things are sorting themselves out around here, I thought I'd catch up on a few makes. First of all I would like to review the bags and the iPad cover that I madly stitched before we left and tell you how they fared in actual use. First of all the iPad cover: 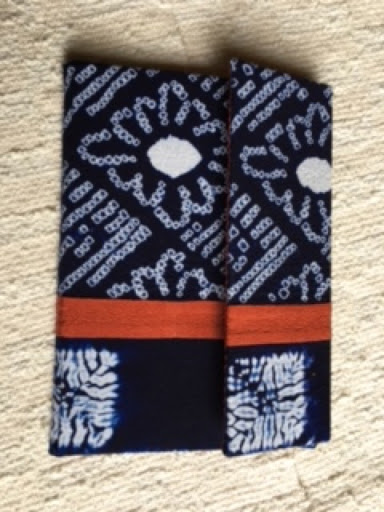 Corbie, my iPad lives in this thing permanently! It works well to protect the screen and to support the iPad upright in landscape position for reading. Two drawbacks, firstly the iPad slips around a little in the corner elastics so that I have to make sure the lens is centred properly when taking a photo or I get dark and fuzzy edges on my pictures. You may have noticed this once in awhile during my travelogue. The second drawback is the little red Velcro dots are not as firmly attached as they could be. The stitches are starting to pull out and the hooks are getting a lot of lint stuck in them. Neither of these problems are very curable though I can handstitch the Velcro down a little better. Otherwise I've become very used to having the cover on and it has padded Corbie well during constant use.
Then you might remember the knitting bag: 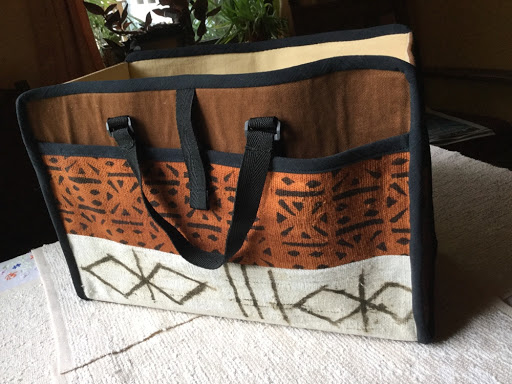 This beast lived between the seats in the van loaded with everything I might need to knit the Flaming Intersect Cardigan and a whole lot more. I added lip balm, a nail file, my iPad and its keyboard, travel directions, maps, and the rock collection. It was pretty darn full! Once or twice I had to clean it out when it started to collect lint, crumbs, dead flies and an accidental water spill. It held up quite well to the abuse! It's still a bit wonky-shaped but not too bad. Currently it's living beside my chair in the living room which will be it's more permanent home. Now the sweater is done it has 3 small projects in it instead.
Then there's the Hiking Bag: 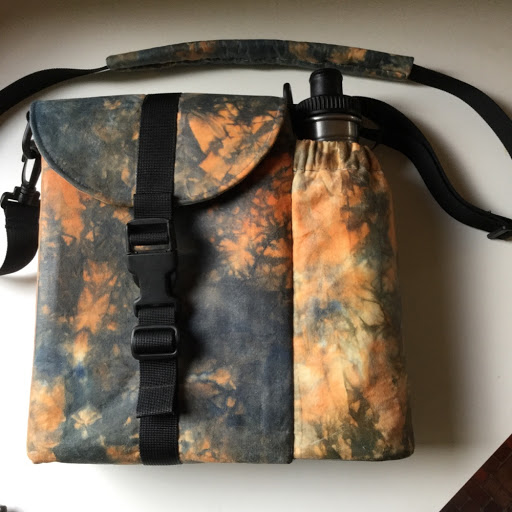 It worked perfectly! I took it on every walk loaded with water bottle, iPad, lip balm, sun screen, sun glasses, bug bite stick and Minions Tic-Tacs. (Banana!) The pack is a little more ahem...weathered looking now. But I was glad that I used the Otter Wax on it especially when we got caught in the rain or the time I slipped and it fell partially in the St Lawrence. It even held an umbrella instead of the water bottle on a couple of hikes when we weren't sure if it was going to rain on us or not.
Oh and there's the tea cosy: 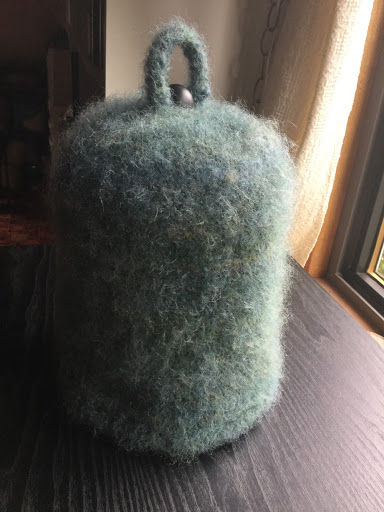 This fuzzy thing worked very well not only to keep the tea hot but also to pad the glass tea press when not in use. Just what I wanted.
Then there were the socks that I finished the day we left: 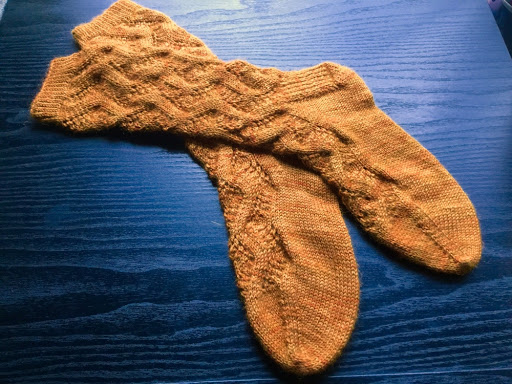 These are the Spring Forward socks by Linda Welch from Knitty Summer 2008. The yarn is leftover Sweet Georgia BFL Sock in colourway Ginger. My version is longer in the leg and I also made a mistake and made the first repeat even longer so I had to do the same mistake for the second sock. They're a little tight to get on and off. Probably due to using my Knitter's Pride Cubics dpns which are square. I tend to knit tighter with metal needles. These took forever because I mostly only worked on them at Guild meetings and then had to rip back when I made errors from lack of attention. I finally had to force myself to finish them by giving myself a deadline. I still have another ball of this yarn which will possibly become a shawlette.
Then there's the Big Project. I give you the Flaming Intersect Cardigan: 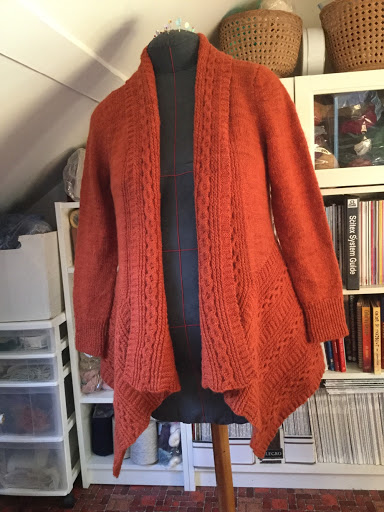 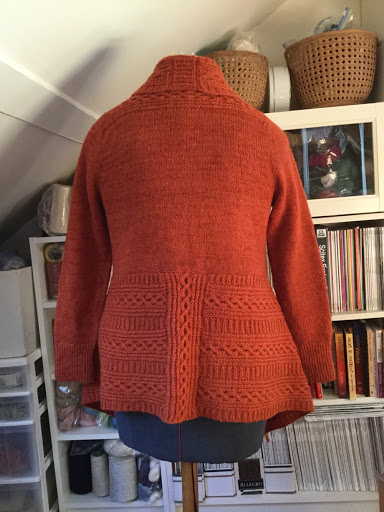 This beast was a shitload of work! I started the wool prep back in April and it took me 3 months to get the yarn spun up and dyed. Then it took another 3 months to knit. Well, 2.5 actually since I finished while we were away and couldn't block it until I got home. The pattern is Intersect by Norah Gaughan for Brooklyn Tweed's BT Winter 16.
I'm really happy with how this sweater turned out! The fit is spot on. For some reason it used less yarn than it should have but I'm not complaining. I have 3 balls left, something over 1,000 yards, enough to make another smaller sweater. However first I want to modify the colour in another dyebath because I don't really need any more bright madder orange sweaters! I have 3 already. It is a really lovely colour though, isn't it? Even bright enough for Sharon, I'm sure. ;)
So what's coming up next in the crafty project department? I need to finish the Boro Bag, which only got stitched on a very little while we were away. I'm going to our Spectrum Study Group tomorrow and bringing it along to work on. I'm also knitting a pair of Foxy Socks for Thom which are close to finished. Plus the Catalina Shawl in charcoal black lace-weight wool from deep stash. I have one 24-row pattern repeat to go but I can only knit on this when there's not much else going on. No reading, no TV and good light. The stitches need to be watched carefully. It's a pretty design though. A combination of lace and twisted rib which looks really light and ethereal in the photo. Mine is the smaller size and probably not so ethereal at all. But that's OK. I haven't had time yet to assess the sewing queue for fall. The van still needs to be cleaned out and the garden needs big time help before the rainy season sets in. I still have to plant my garlic and bring in the cactuses from their summer vacation. We finally caught up on the grocery shopping. It took 4 separate trips to different stores to get stocked up again. Yum, fresh fruit and veggies! Most of the supermarkets we visited while we were away did not have the variety that we're so used to here. I put that down to our large Asian and South Asian population who insist on fresh ingredients. Not so much pre-chopped and packaged "stir-fry mix". Even the mushrooms were all sliced and packed in plastic cartons. Where's the loose bin with the paper bags to store them in? And I also missed our Cobbs bread. So. Good. On the other hand, dairy and meat were cheaper than here. We actually got reamed out by an old lady in Maine who gave us a hard time for buying "expensive" free-range organic eggs. They were still half the price they are here! She apparently wouldn't pay more than 88 cents a dozen. Obviously there's some government support going on down there. Because somebody isn't paying what it actually costs to produce the food they're eating. But I digress.
What I did like was the ability to buy wine and beer in the grocery stores in most of the US. In most of Canada there was usually a government liquor store near the supermarket. Only in Quebec were we able to buy wine at the same time as the rest of our groceries. So sensible. Wine and beer are food, people! We don't need to be protected from ourselves, thank you much.

Ahem. I digressed again, didn't I? Maybe it's low blood sugar. I can't stop talking about food so I guess I need to go cook some dinner now.

Yeah, yeah, yeah!! 'Bout time you added some color to your wardrobe, I approve!! And even more wonderful, spun, dyed & knit by your very own little hands in color?? Fantastic!!
As for the American prices - well, you better not get sick in the land of cheap goods 'n' gas 'cause we all know what their dollar doesn't subsidize. Enjoyed your travelogue & the great photos as usual. Glad to see you made it home with everything intact.