Ah, the light is coming back now! Slowly-slowly. The dance of the solar system continues. The wheel of the seasons goes around. All is as it should be.

Thom and I decided that this year we would go to the annual Solstice celebration on Granville Island. We've attended in the past but for the last few years either we've had our Solstice Family Dinner on that day or somebody wasn't feeling well or it was raining. This time it was cold but no rain in sight. First we made our lanterns: 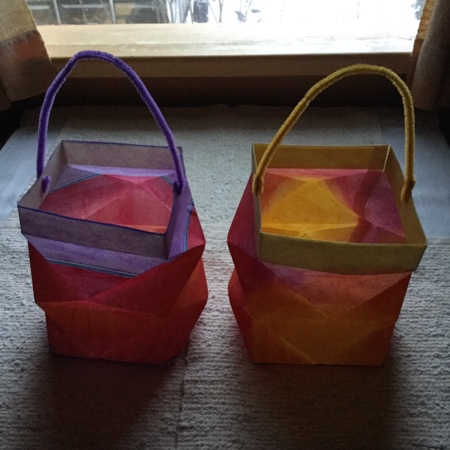 We used these really clear instructions. We didn't have any watercolour paper or watercolour paints so we used white construction paper and liquid tempera paints. After they dried we marked and did all the folds but didn't glue anything yet. We coated the sheets with olive oil (that being the only kind of cooking oil about) and then we left them overnight to set. The oil makes them beautifully translucent like parchment paper. The next day we finished the folding and gluing and then hunted around for lights. The LED candles we had were too orange and their light dulled the colours into ugliness. Instead I found some tiny blue-white LED flashlights that we taped two at a time into the bottom of the lanterns. The handles are simple chenille stems. These little lanterns are surprisingly sturdy and held up well to being lugged around all night!

To make it even more of a celebration we decided to go out to our favourite sushi place for bento. Yum! Then we headed for Granville Island, stopping at the liquor store for a mickey of French brandy - you know, in case we needed to warm up later. It was only just above freezing at this point! We got to our meet-up spot at Leg-In-Boot Square (yes, there's a story to go with that name) a little early and there was only one other person with her lantern. But by the time our drummers arrived there were more and as we walked together on the very icy and slippery seawall, we gained at least a hundred in total. Ours was only one of the three parades that ended up at the Water Play Park next to the False Creek Community Centre where we were welcomed by the Carnival Band and then the Vancouver Morris Men sang us Wassail: 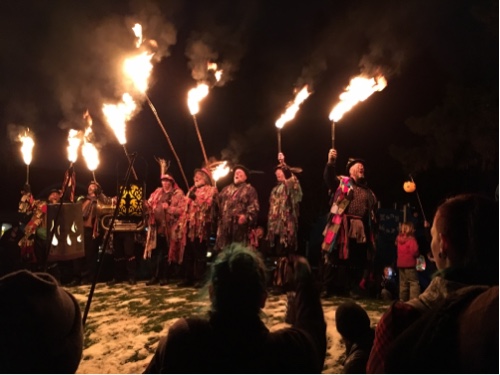 After that everyone headed in to the community centre for various activities. We hung out in the main hall for singing, an all-ages (and hilarious) community square dance and of course, the Morris Men's traditional mummers' play. At 9:45pm the Carnival Band led everyone out to the nearby park hillside where we watched the Urban Haida singers and some spectacular fire dancing: 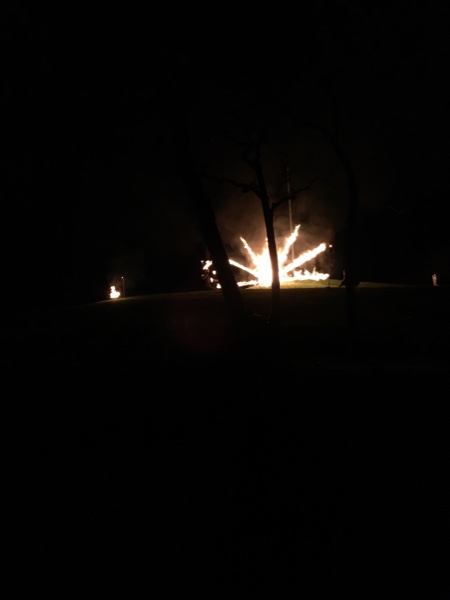 Not a great photo from Thom's cell phone but hey, it was dark! Then we walked home - 5 kilometres uphill on some very slippery sidewalks. We were holding each other up by that point! (No, we didn't drink all the brandy. Heh.) The only thing we didn't see was the candle-lit labyrinth. You needed to pay and have a particular time to get in and it was really busy. We had lots of fun anyway! The sun has been welcomed back in style.

Today I'm feeling kind of stiff thanks to the combined efforts of trying to walk on crazy lumpy ice and also standing on a cold hill slope for an hour without being able to move because of the tight crowd. I didn't want to lose our good viewpoint. And then when I got home I noticed this: 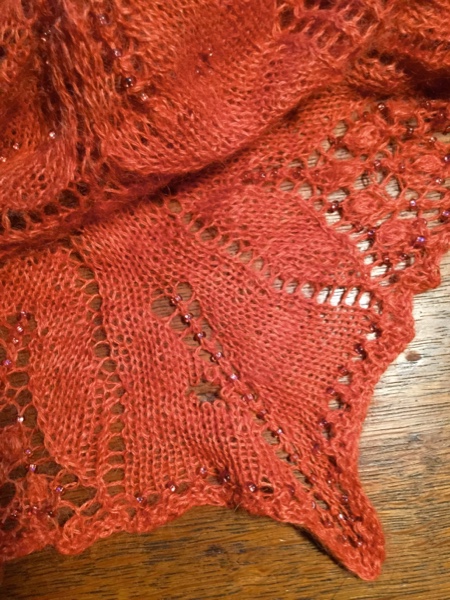 A hole in my suri alpaca Aeolian shawl! Right at the most obvious point. Whaa! Now I need to hunt down some of the leftover yarn and mend it. Hopefully as invisibly as possible. I bet it happened right after some nice lady complimented it too. Wouldn't you know?

Today I decided that since we still had some snow left I would do some snow dyeing before it all disappears in the rain. I've never tried this before and the results are currently melting away nicely so we'll all have to wait to see how it turned out. More details coming.

ooo, how much fun you guys had. Even if it was dark and cold, I bet that's part of it. Sounds like the best holiday celebration I've heard of.

sounds like you welcomed the light back in a very impressive manner. Too bad about the hole, hopefully the mending job will be good.