I don't know what it is about my sock experiences lately but again I have a project that is turning my fingers funny colours. This time it's orange instead of blue! I've been knitting on a plain pair of socks for Thom using the yarn colour that he liked best from the snow dye experiment "sludge": 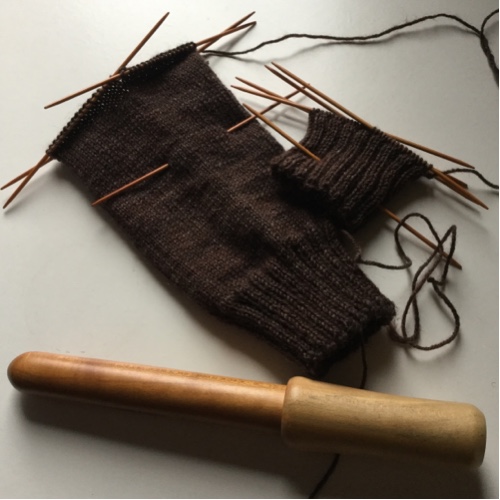 Note the orange tint on my bamboo needles! I think the problem this time is that one of the dye colours I used was a very old rust-orange and it just didn't take properly on the wool. Or I didn't rinse it well enough. Or probably both together. Anyway, this is even worse than the crocking indigo dye from the last pair of socks! But I should be able to get it to stop after the socks are finished even if I have to heat them again in an acid bath and then rinse like crazy. It likely won't affect the current yarn colour too much. I hope.

I knit the pocket pieces for the front of the Licorice Tunic but ran out of yarn two rows before the end. Finally I remembered that I still had a small ball of the sample yarn left and it was plenty enough to finish the second pocket. Then I spun and spun some more and finished another skein which is currently drying after giving it a wash before I wind it into a cake. I think I only need maybe one and a half more skeins to finish this sweater! I still have the first skein I spun which was a wee bit lighter than the rest so I was planning to use it for the pocket edgings and the collar. Then I was going to spin some 2-ply to use for sewing up the sides but perhaps I will just use some of this skein for that also. There's 126 yards in it so that should be more than enough for all the finishing.

The weather has been rather changeable. Today was drizzly but yesterday was mostly sunny and quite warm. Thom and I both got out in the garden for some much-needed playtime. It was so lovely! He was pruning the blackberries on our back fence and I was pulling up all the dead alyssum and leftover chestnut leaves and assessing my veggie garden for the coming planting season. Sometimes alyssum will winter over in a mild year but I guess it didn't like being underneath a foot of snow and ice! Twice. I was a little concerned about my rosemary plants which are marginal in our climate but even the one in the pot which I forgot to put in the greenhouse seems fine. I think the snow actually protects things as long as the weight doesn't collapse the branches. We won't know the extent of any damage to our shrubs and plants for awhile yet until it starts to grow and leaf out. Some stuff is oblivious to our cold winter. I noticed my rhubarb is starting to come up! Yay. Soon I'll be starting my little seedlings. Not too early though because the garden isn't nearly ready for them yet.

I nearly forgot to mention in case you were wondering - that wooden item in the above photo is one of my lovely dpn cases that Thom made for me. It keeps all the little bamboo sticks together and unbroken. I really like it. Yeah, and the socks are for him of course.

Interesting Needle "case" - that one looks big enough to hold the whole sock while it's on the needles!!! Lovely shade of brown even if it 'runs' a little. I'm sure it will disappear with another rinse or two.
I was out in my 'garden' yesterday too - it appears the bamboo is dead dammit. This is the second time I've nurtured a bamboo tree in a big pot only to have a week or two of really cold weather kill it. Sigh. And I like bamboo a lot too.

There's a lot less space inside the holder than it looks! It holds about 15 size 2mm bamboo dpns. Yes, I have a lot of them! Sorry about your bamboo. Things feel the cold more in pots. I think now that I've lost my recumbent rosemary. Sniff. My fault for not putting her pot in the greenhouse this winter.