Ah, how time flies. I swear that I just turn around and another week goes whooshing by me. I guess that means that I'm not bored, huh?

After what seems like months of sunshine and hot weather (well, hot for us anyway) it's cloudy and sprinkling a little today. We still had to water the garden however because it's not raining nearly enough to get anything properly wet. Of course this change in the weather happened just as I harvested my garlic and am now trying to get it to cure before I store it for winter use. It's currently on the deck step in a relatively dry spot under the walnut tree but I'm keeping an eye out in case I have to rush out and bring it in the basement. So far the rain is drying as fast as it hits the ground.

In knitting news I finished a couple of ongoing projects. I'm pretty happy with my Element pullover sweater: 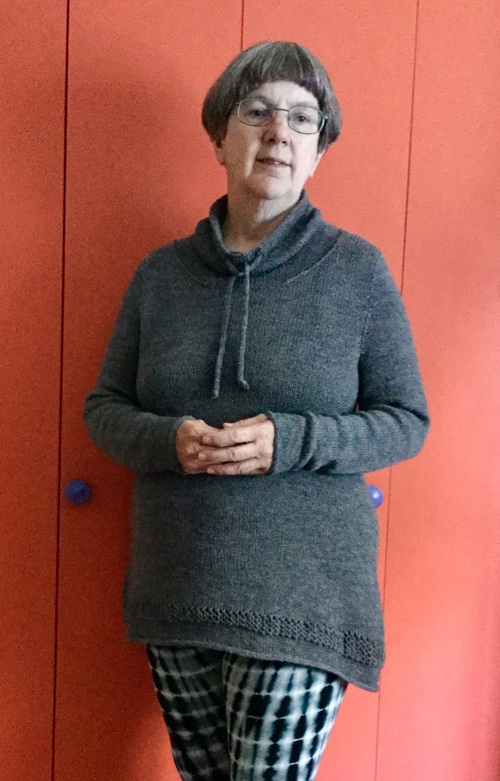 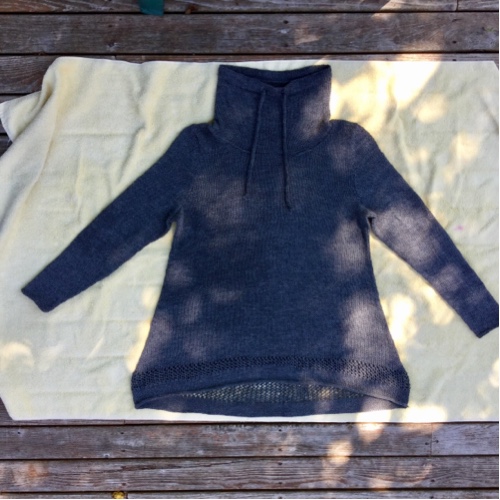 With it flat you can see the lacey hi-lo hemline and the drawstring cowl collar. I used my spool knitter for the I-cord instead of dpns. Much easier! I made the body a little longer than the pattern but shortened the sleeves nearly 3". They are still long on me! I reduced the height of the sleeve cap and armhole too but could have gone about half an inch more still since the depth is still loose. Hopefully that means I'll have enough room for a t-shirt layer or two underneath. Right now though it's too hot to wear it so I tucked it away until things cool off. This sweater used only about 3-1/4 skeins out of my stash of 6 so there's enough left for another project. 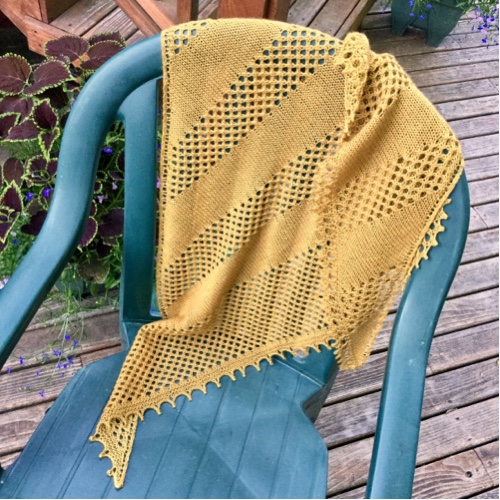 The pattern is by Tetiana Otruta and is free on Ravelry. I made a ridiculous number of mistakes on this project! The pattern should have been simple but somehow wasn't. Some of the blame is mine but I do think the pattern could have used tech-editing. I began this project in order to help my friend get started because she was having trouble too! I should have taken the time to go through and re-write the whole thing for my own benefit. In the end the mistakes that were left don't show and the thing is lovely and soft and blocked out really nicely so I'm happy enough. Another project that is too hot to wear!

I'm well into the lace and beads part of my Linen Dreams Shawl. Much further than this photo from a couple of days ago: 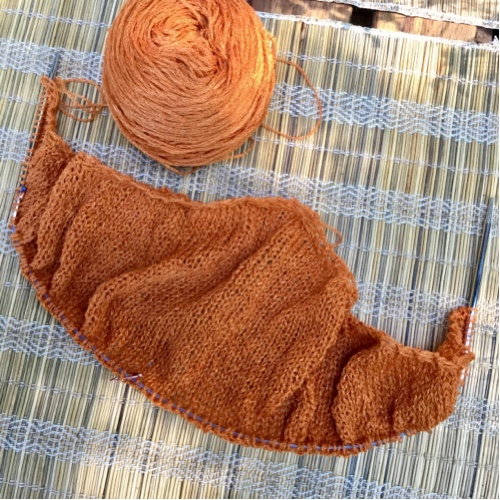 The pattern is Sweet Dreams by Boo Knits and it's one of 5 in a collection and not available separately. I decided that since I've always wanted to knit one of Bev's lovely lace shawls I'd just go for it. There's one or two other shawls in the collection that I might want to knit eventually as well. Since I don't buy knitting magazines anymore and rarely books either, I could afford to splurge on this ebook. At least most of the money goes directly to the designer.

I now have patterns picked out for the other skeins of linen yarn I bought in Victoria. They may have to wait a little while though. I can always take them with us on our September Trek.

One thing I haven't done yet is continued my sewing odyssey. I still have 4 garments cut out and waiting for me to change the thread in the serger. Plus I need to put together the Thread Theory Fairfield shirt pattern and trace off Thom's size and adjust it to his liking. I already have a couple of pieces of fabric for long-sleeved shirts and he really has a gap in his wardrobe just crying for them. Somehow he has gazillions of nice short-sleeved shirts for summer but all his long-sleeved winter ones are wearing out. It would be great to have a perfect go-to pattern for him and then I can just keep my eyes open for the right fabrics. He loves nice linens and crisp cottons as much as I like to sew them.

Speaking of our September Trek we have our ferry reservations now so we're committed to 2 weeks in Haida Gwaii and then down the Inside Passage to Vancouver Island. We are hoping that the many awful forest fires in the BC Interior will be under control by the time we have to head to Prince Rupert because we have to go right through the Williams Lake area where the fires are worst. It's reminding me of the year we went to Colorado and didn't get out of the smoke until we were in the southern part of Montana and nearly to Wyoming. It was horrible. My heart goes out to all the thousands of people in BC affected this summer. The total is currently 43,000 people (plus a lot of their pets and farm animals) evacuated or on alert. Yikes.

I still haven't plotted the rest of our trip once we land in Port Hardy on the way back. We'd love to get out to Long Beach for at least a few days. Haven't been there for years so it's great to have an opportunity this time. Half the fun for me is figuring out where we want to go and how we're going to get there. Black Belt Google-Fu Skillz!

Love your Element Pullover - the perfect Hoodie for walking!!! I'll bet you wear it a LOT on your next get-away to Long Beach. And all that color!! I didn't realize you got such a strong color from the rhubarb. And orange. They'll be so cool with all that black & brown!!

Thank you, Sharon! You know orange is my favourite colour, right? Those closet doors I've been photographing in front of lately are in my study/studio. Although the walls and ceiling are boring white, all the trim up here is wildly red-orange, yellow-orange and violet-blue!

That yellow rhubarb dyed shawl is fantastic! All of the intricate details are wonderful, especially the hemline. I'm always in awe of the patience required to knit, crochet or sew for that matter.

I hope your vacation is wonderful and you can avoid the fires. BC has had its share of wild fires over the past few years. Seems like every summer there is an issue with it.

Thanks, Suzanne! It doesn't really take patience most of the time. I'm kind of obsessed!

Crossing our fingers for open roads...