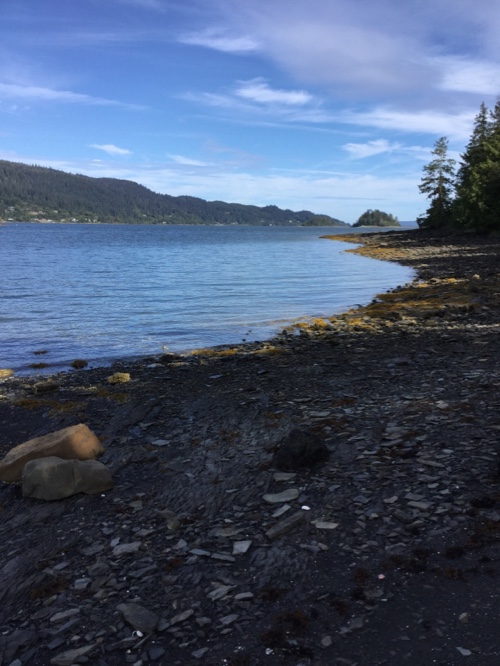 We've been busy since last time I had a chance to post! I left you with the bear story but we missed the fact that there was actually another one in the forest near the trail where we walked. The dogs knew! Luckily we didn't see it but someone else did. Guess it didn't want a dog-snack. Whew.

The next day was gorgeous and sunny so we all took the skiff (dogs too!) out to a couple of the little islands that dot the bay at the south end of Graham Island. Tide was out and it was fun to walk around a whole island in less than 15 minutes.

Thom and I wanted to spend some time camping in Naikoon Provincial Park so we headed up first to the Misty Meadows campground near Tlell on the east side of the island. 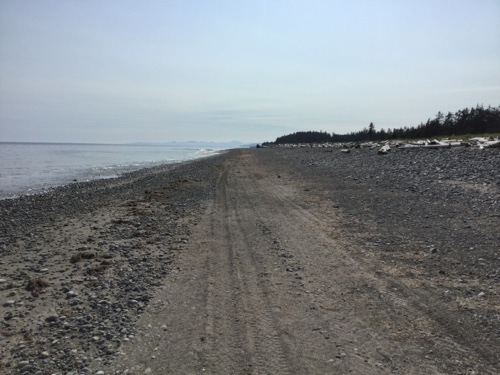 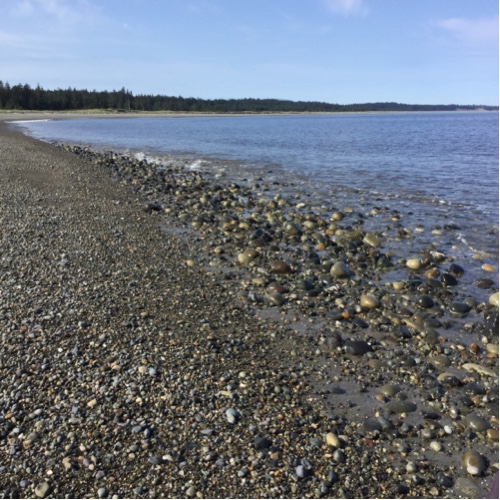 The remains of the Pesuta wreck was just visible over there on that far beach but I don't think you can see it in this photo. You can see it was a a pretty nice couple of days here. Our campsite was in the woods in the lee of the dunes. We made a friend: 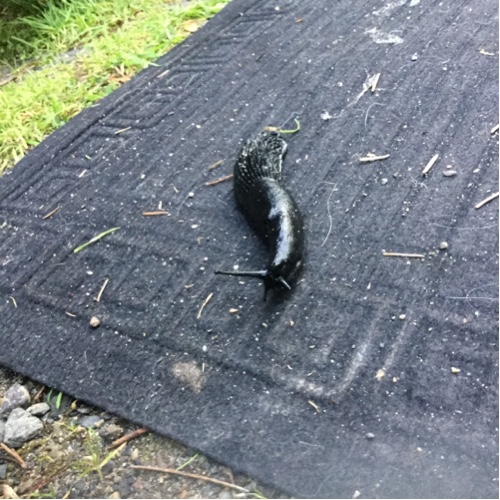 A lovely big black slug named Billy (Which Way You Goin', Billy?) that travelled the full length of our campsite and snuggled up on our rug for a visit.

Next we headed for Masset and then right on Tow Hill Road to North Beach. We ended up with a fabulous campsite on Agate Beach with this view: 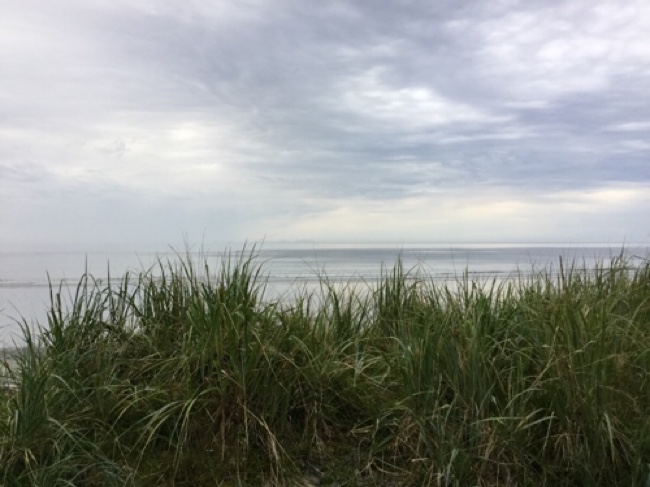 We were serenaded by the waves and got in lots of walks on the beach. 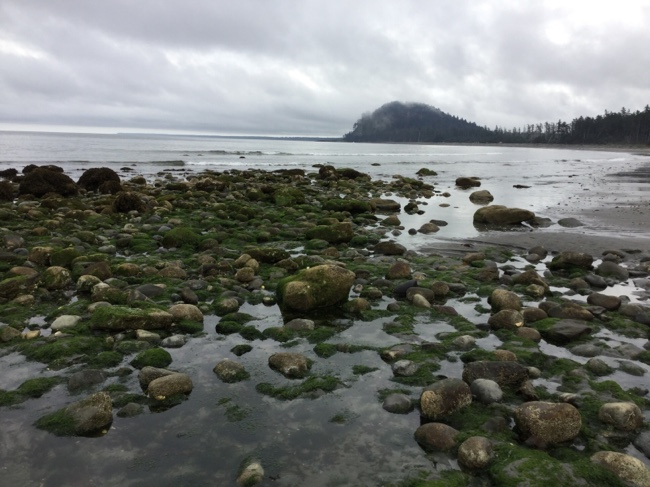 That's Tow Hill in the background and great tidepooling at this end at Yakan Point. I like the way the waves tuck shells into every crevice: 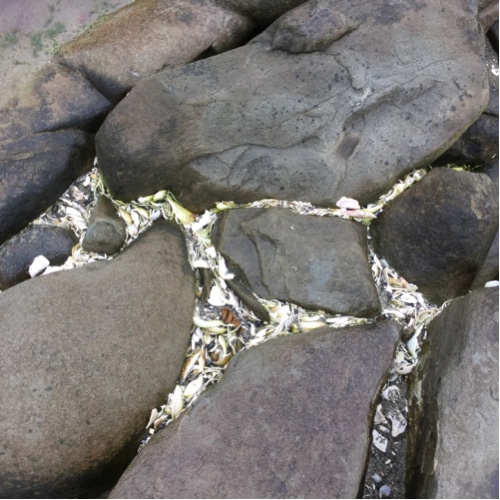 And the cool sculptured sandstone rocks: 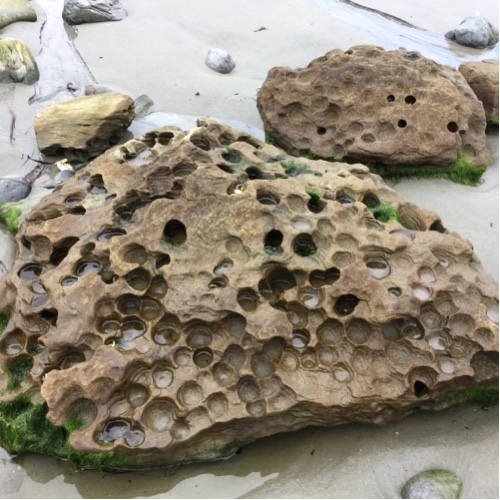 Of course we also climbed up the very nicely finished trail to the top of Tow Hill: 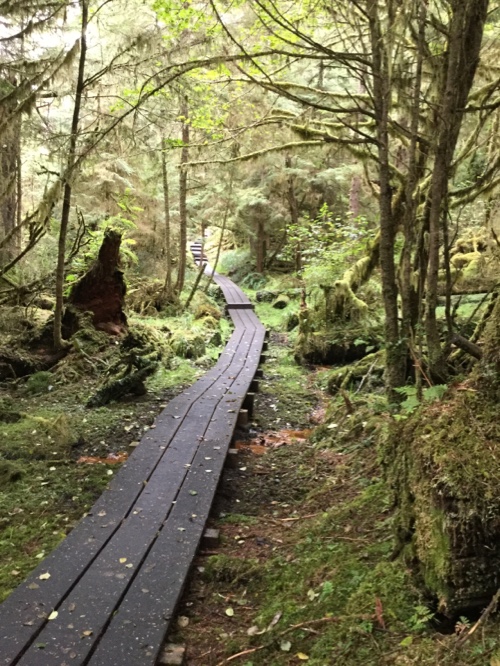 It's a bit of a climb but the view is totally worth it: You can't quite see our campsite in the trees but it's just past that white trailer. I thought it didn't get much better than this! But...

My sister and bro-in-law were celebrating their wedding anniversary so they rented a cabin just down the road. We got to walk on their beach too (you can see it past Yakan Point there in the last photo) and then we took them out to dinner in Masset at the ritziest restaurant in Haida Gwaii, Charters. Yum! And that's not all - the next evening we all went to my sister's friend's funky hand-built house near Masset for another delicious dinner. Everyone has been so kind here. (I didn't even tell you about the outdoor party we went to in Charlotte last week with tonnes of food and a live band, did I?)

We were going to stay one last day on North Beach but it rained all day so we headed back south to Charlotte and a hot shower. Today is mostly sunny (with a few sprinkles just for fun) so we're drying out and cleaning up before our ferry trip back to Prince Rupert tomorrow where we will wait for our Inside Passage sailing on Thursday. Chances are we won't have any more wifi unless the connection in Port Hardy works as advertised. Not holding my breath but you never know. Oddly enough I'm reluctant to leave here. Can't guess why. Hah.