First of all I just want to register my complaint to the world: I hate shifting back and forth from Daylight Savings to Standard Time. Blech. Just pick one and stick with it, darn it! My internal clock is all cattywampus still after the most recent one. Plus it gets dark too early! I’d much rather it was dark in the morning when I get up than at 4 o’clock in the afternoon.

So, what have I been up to since last we chatted? I made Thom a shirt! 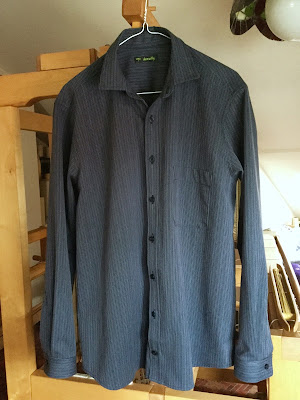 Sorry he wasn’t available to photograph it on him. Though I guess if I tried hard enough I could have caught him since he’s been wearing it for two days straight now. Obviously it’s love at first wear! I also couldn’t capture the colour correctly no matter what I tried. It’s actually a very dark navy with woven-in narrow white stripes and the buttons were recycled from an old shirt. I’m very pleased with the pattern, the Fairfield Button-Up Shirt from Thread Theory. This shirt has everything: two size ranges (slim to regular figures and larger figures); extra add-ons with sleeve, collar, cuff and pocket variations; separate upper and lower collar pieces so the collar rolls correctly; separate interfacing pieces so you don’t have to trim; and my favourite, the tower plackets. Aren’t they lovely? 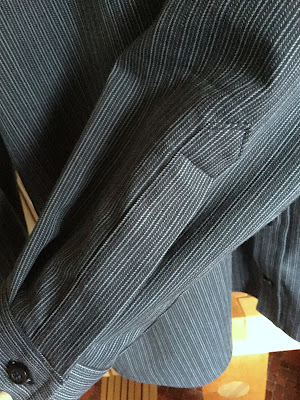 The instructions are well-written and super-detailed but there’s also a cheat sheet for quick reference after you’ve made a few shirts and only need a reminder what comes next. There’s even a spot to record your guy(s) measurements which can help choose the correct size. I think the sizes tend to run a little small because a L was the best fit for Thom who usually wears a medium in ready-to-wear. And the neck is still a wee bit tight if he was to do up the top button - which will never happen! I used the pattern pieces for the “larger figures” because he doesn’t like his shirts too tight but I straightened out the side seams because he’s pretty much the same measurements from chest to hip. This turned out to be perfect and with exactly the preferred amount of ease. I also lengthened the sleeves by nearly an inch because they seemed a little short. Thom also needs his cuffs a little tighter than normal so I may adjust the pattern further to bring in the sleeve width and shorten the cuff just a little. Otherwise we have Absolute Pefection and a bunch more Bespoke Shirts will ensue. He needs to replace most of his current long sleeved shirts because they are completely worn out. The ones in the stores were not appealing nor do they fit the way he likes. He’s requesting linen so the next shirt will be in the same linen/rayon blend as my Stormy Dress (aka Marcy Tilton’s V8876) that I made a few years ago.

But first I made him another present: 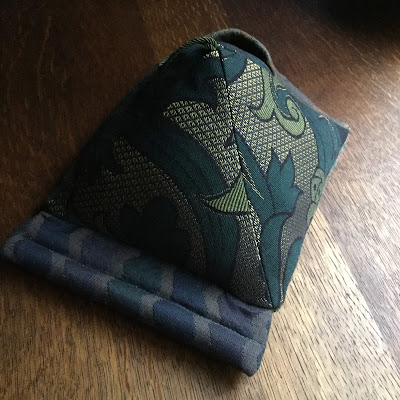 Spoiled, isn’t he? Heh. Now he has a Pyramid for his iPad too similar to mine! The fabrics are vintage upholstery swatches and I made one pocket on the back for storing earphones. These make it so easy to relax in bed (or rest it on a table) and read without having to hold onto the iPad which can make your hands sore. I use mine every day. Speaking of my iPad, I sadly had to retire my handmade cover because it literally wore out after a year of constant use. Lazily, this time I bought a commercially available cover which is very nice. The only disadvantage is that now it doesn’t fit onto my tripod unless I take it out of the cover, which isn’t easy to do. Ya wins some; ya loses some eh?

Lucky Thom, is all I can say. Lucky, lucky Thom.

Hey, when you find a winning piece of clothing for your man, stick with it!! Obviously he loves this one. Love your little pyramids.

Yes! lucky, lucky Thom! Fits great. Now we need to
to for a walk and see if we can find a good linen store.

I love that pyramid for the ipad. Is there a pattern for that? I think that might save my hands.

Hello! Is this the first time you’ve posted here, Thom....er, Anonymous? Glad you like your shirt, hon’. Yes we’ll get more fabric for you soon.

Tobie, yes there was a pattern originally somewhere but I didn’t use one this time. So really it’s pretty easy. 4 triangles and a square plus the handle cord and the folded “tongue” piece, finished dimensions about 8” on a side. I added a n optional pocket for earphones and/or reading glasses on the back piece. A square of mat board or other heavy cardboard in the bottom, poly stuffing plus a rock inside for a little extra weight. I used upholstery samples from over 20 years ago but pretty much any fabric would work. Stitch the pieces together (stuffing and stitching the tongue first) and leave one side open to insert the mat board and stuff tightly. Hand stitch up the last side adding more stuffing if you need it and you’re done! Well, it did take me a whole afternoon. Heh.

That shirt is so beautiful! Andre is quite envious...
Hey what about a nice tutorial for that pyramid?

Aww, how sweet, Suzanne! If I made a tutorial then i’d Have to make another pyramid. Sorry, not happening any time soon! It’s not complicated and you can simplify it further by using lighter fabric and leaving out the loop and the rock and just use any heavy cardboard for the base to keep it flat. Even the basic measurements aren’t critical.