Hello youse guys! Yup, still here. Still hurting a little from the roofing tiles...er, shingles but on the mend. It didn’t stop me from socialising with family anyhow though I was careful to insist on gentle hugs! (My gang really know how to hug, just sayin’.) It was a low-key but very fun time but as always, I’m now antsing to get back into the studio for some makin’ time. I haven’t even knitted a single stitch for a couple of weeks! Imagine that. Must be a new record or something.

I did manage to compile a list of all my projects for this past year. It’s quite the list! For once I sewed more than I knitted. And I dyed a lot of yarn and fabrics, mostly with natural dyes, and even crocheted a couple of things. Here’s the highlights (or at least all I had to patience to collage):

Knitting, which is what I consider my main creative outlet these days, added up to 16 items in total. Of course 6 of them were rather large sweater projects mostly in fine yarns: 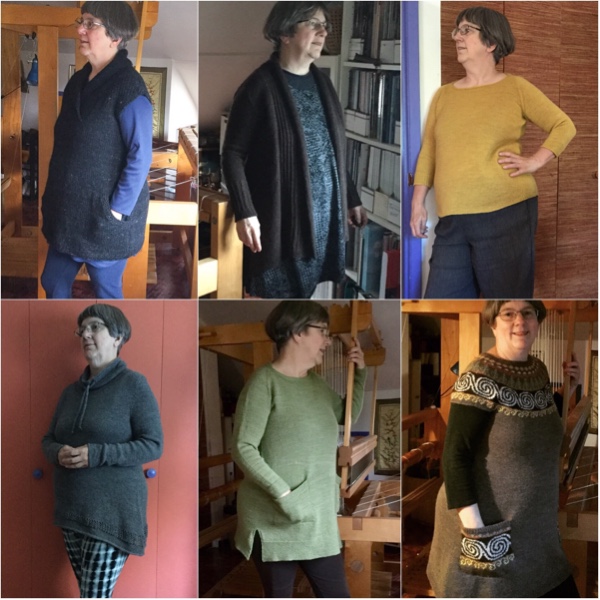 Crochet, which I don’t actually do all that often even though I like it and am reasonably proficient, added up to a whopping 2 items - one at the beginning and one towards the end of the year: 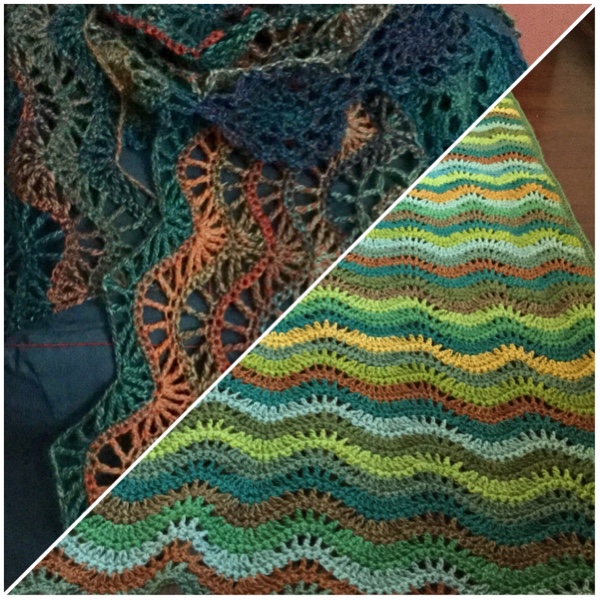 They used up a lot of rather elderly stash yarn too which is all to the good. I’ve actually been wearing the scarf on the regular since I quite like it’s lacey look and autumnal colours.

Sewing is the craft that kept me working hard in the studio this summer. I perfected a few TNTs so there was a lot of basics sewing going on: leggings, t-shirts, tunics and crop pants. I was also super happy to find an excellent pattern for shirts for Thom. These are just some of the highlights: 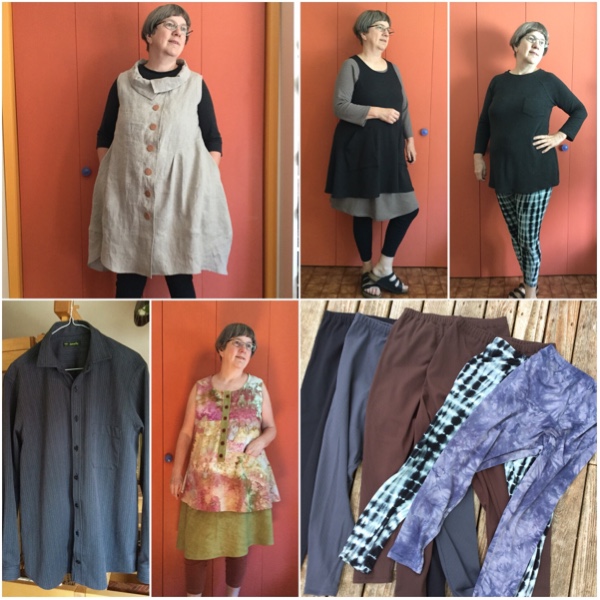 I also did some home dec/other sewing when I made the cushions for my chair, the iPad Pyramid for Thom and the mostly hand-stitched Boro Tea Cosy. 12 projects using woven fabrics and and 10 using knits for a total of 22 sewing projects this year. I still have a couple of unfinished projects that hopefully will get done very soon though it’s hard to go back to what was actually summer sewing in mid-winter!

Dyeing. The dyepots got a workout, especially after Thom fixed my old propane camp stove so I could work outside. Most of the projects were natural dyes and most of those were home-grown dyes as well. Yay! I also tried to use up some of my very ancient synthetic dyes since I’ve had it on good authority that it’s better to use them than to try to find somewhere to dispose of them. 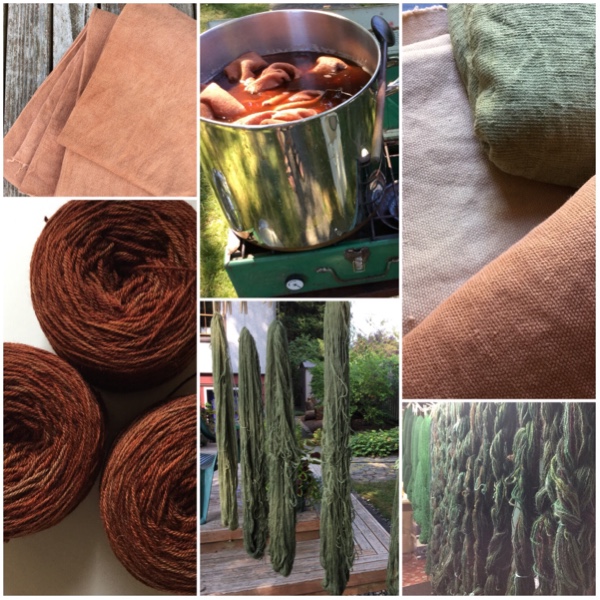 For the most part they’ve worked surprisingly well. Hmmm...I wonder if you’ve noticed a colour theme here? I’m not exactly sure how many dye projects this adds up to but it’s at least 10.

Weaving. I had such high hopes for finishing my Stashbuster Blanket - or at least getting it on the loom. Nope. The reed is nearly threaded but that’s it, at least until I feel more up to reaching over the beater. Soon.

Hope you all have a very Happy, Safe and Warm New Year! We spent our day with Thom’s brother and sister-in-law out at the Reifel Bird Sanctuary feeding our feathered buddies. The weather was chilly but sunny and the birds were definitely hungry! Now I have to wash the chickadee spit off my gloves before I wear them again. Heh. Sorry there’s no photos of hand-feeding the little feathered piggies since obviously my hands were kinda busy. 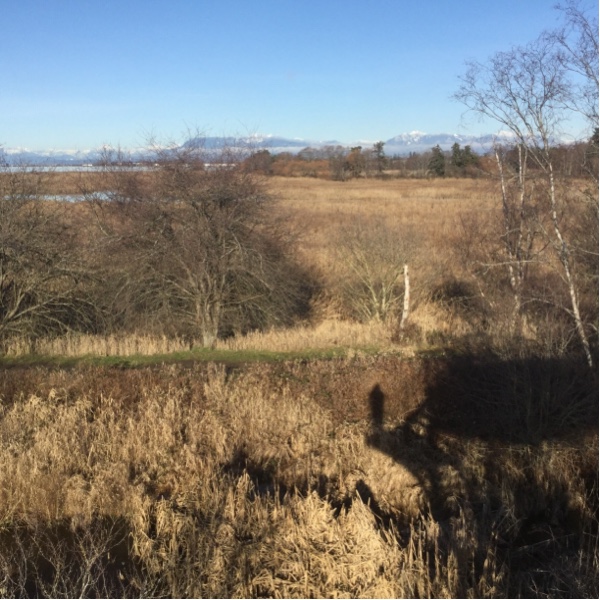 I climbed the lookout for a view towards the north. See my shadow? And Thom and Rob below yakking while the ducks chowed down on the birdseed: 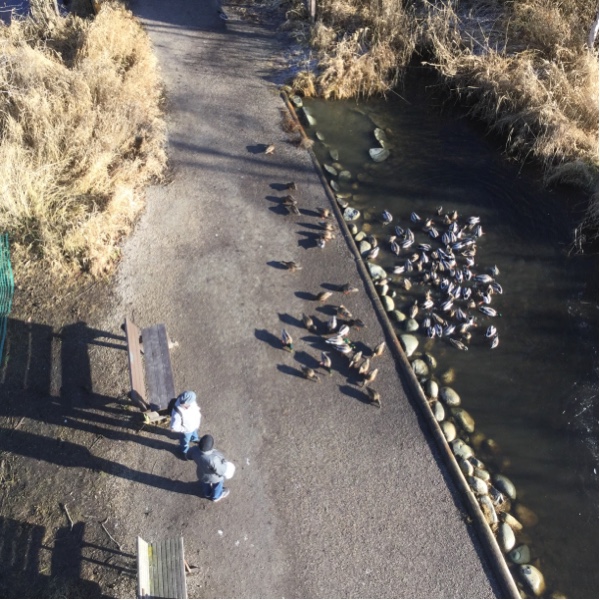 The whole family loves spending time out there. Mud, grass, birds (including eagles, hawks, snow geese, about 6 kinds of ducks, sandhill cranes, black-crowned herons and a lot more) and a warming hut with a fire going in the stove. What’s not to love? 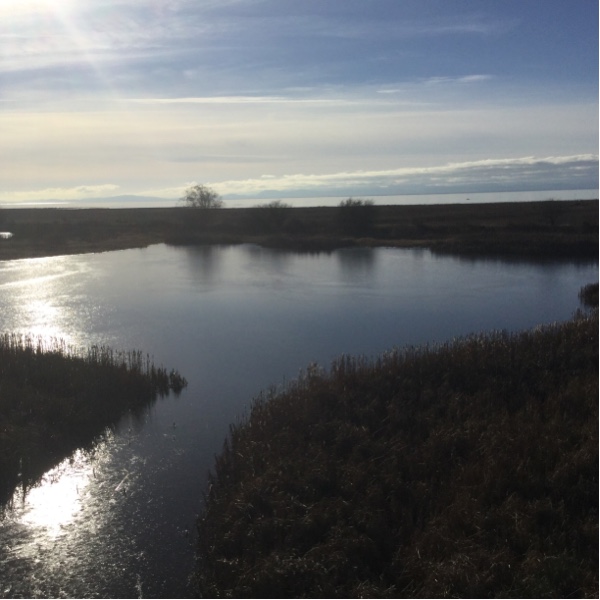