On Day 17 we left Valley of Fire and drove down through the middle of Las Vegas again, unfortunately hitting it at early morning rush-hour. Once past the downtown area though we went faster southwest and back into California. We got off the Interstate and took some rather minor roads south through the Mojave Desert. In the higher area there was actually snow on the Joshua trees! 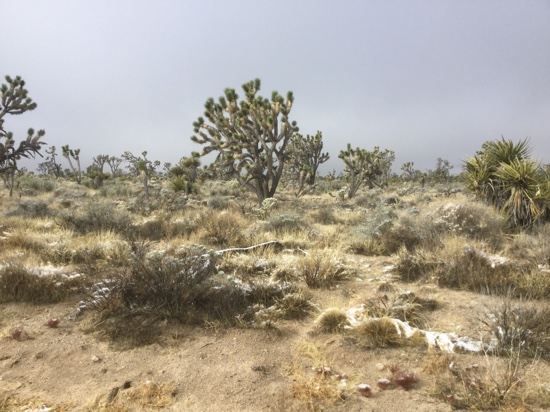 It was quite magical. On our way into Joshua Tree National Park we stopped in the Oasis Visitors Center for maps but continued quickly into the park to try to score a campsite since we didn’t have a reservation. We were very lucky (and early) and found a really nice quiet spot in Bell Campground which is one of the First Come, First Served camps and only has 18 spots tucked into the rounded monzogranite rocks.

After nabbing our home base for 3 nights we drove down to visit the jumping cholla garden. Also called teddy bear cholla, it was pretty impressive: 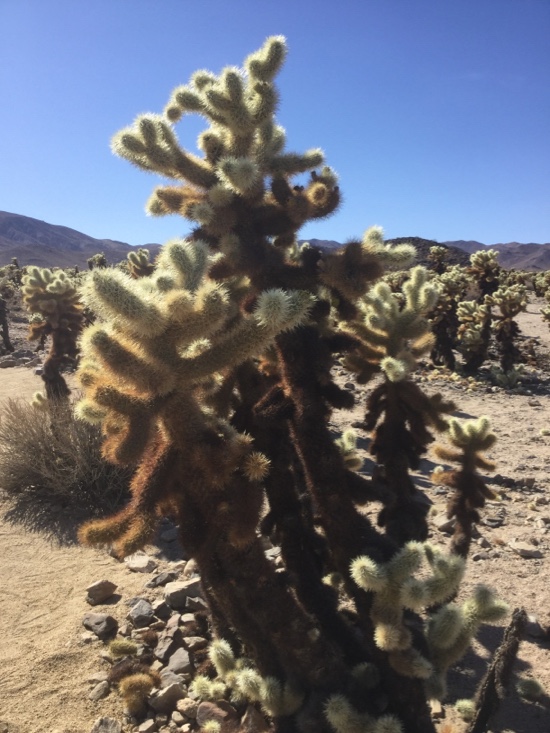 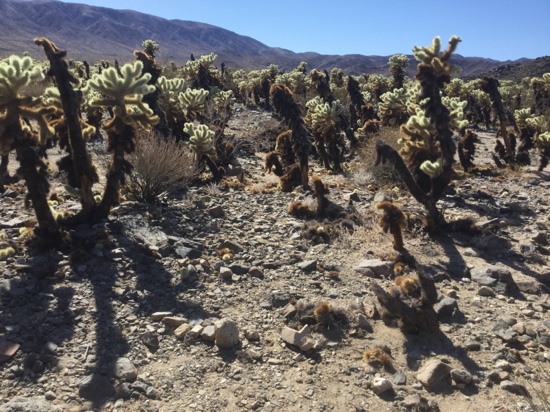 There were acres of these and lots of warnings not to stray off the path or touch the plants. A first-aid kit prominently available was a good clue that these stickers are not nice! I don’t know if you can tell that the teddy bear cholla is different from the silver cholla I showed in a previous post. They have those here too plus yet another variety called pencil cholla: 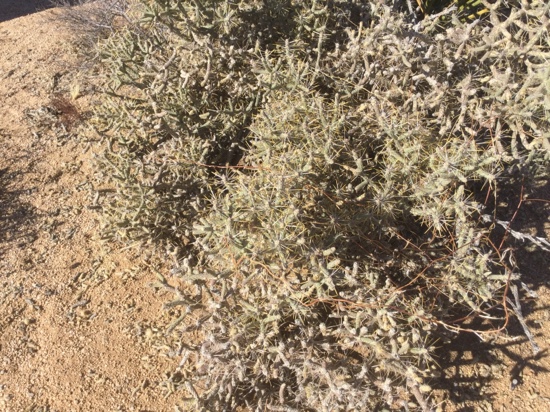 We learned that pretty much every plant out here is prickly, even the ones that aren’t cactuses! This is an ocotillo, one of the few that was blooming: 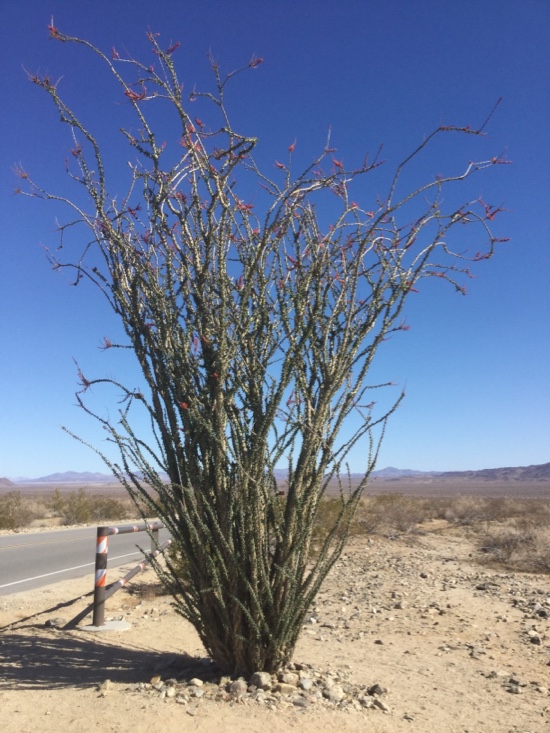 There was a hummingbird in there somewhere enjoying the flowers but I can’t find it now. This plant usually looks like a tall bundle of spiky sticks: 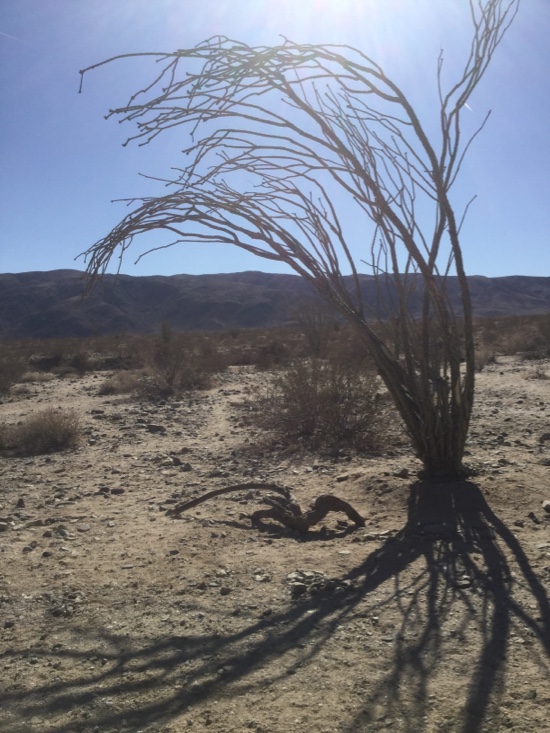 Until it gets enough water to put out tiny green leaves and the pretty red flowers. There are of course a lot of Joshua trees here, some of them really big. They aren’t really trees but yuccas, a member of the lily family. There’s also Mojave yuccas that are related but don’t grow the tall trunk: 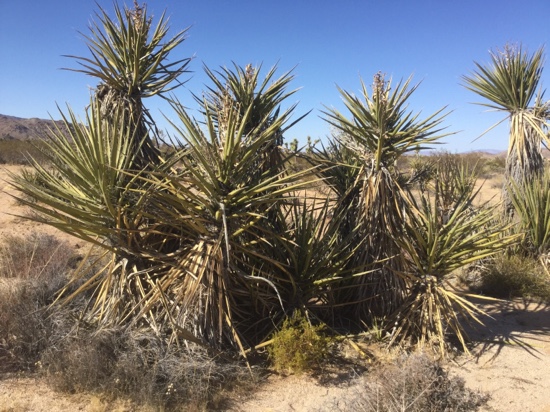 On Day 18 we walked the Skull Rock trail: 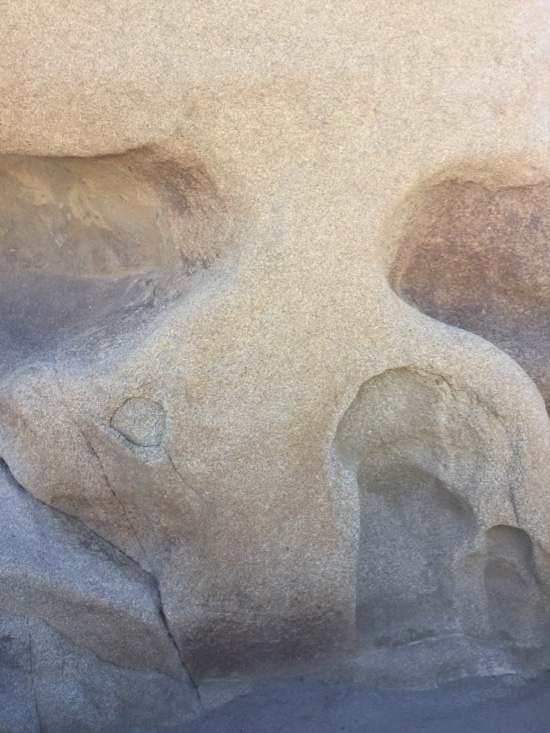 I couldn’t get far enough away to get the whole creepy head in! There’s a nice set of nature plaques along part of this trail to introduce you to the plants and animals here. There’s turbinella oaks, pinyon pine and juniper. I found a jojoba: 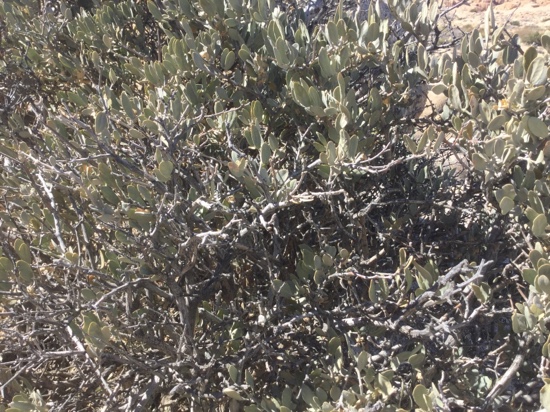 The nuts of this shrub are food for animals and the soothing oil is extracted commercially. More cool rock shapes in the monzogranite: 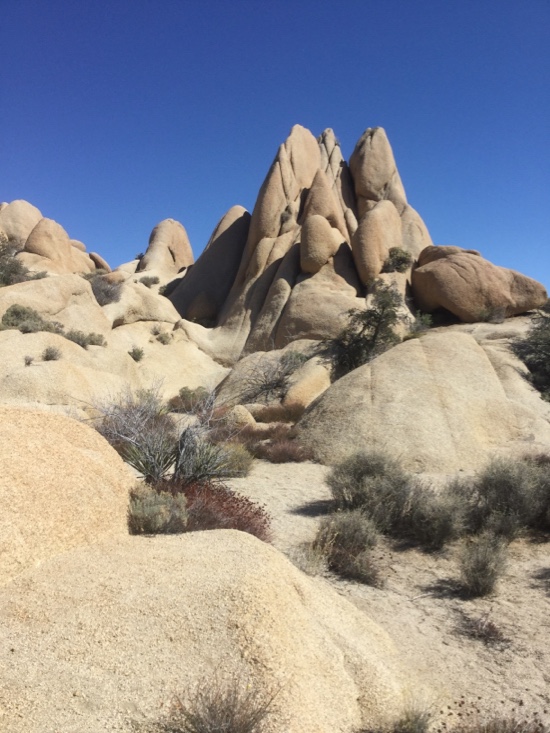 We also drove out to Keys View high up in the San Bernardino Mountains where you can look down on the Coachella Valley. If it’s not too murky with Los Angeles smog you can see the Salton Sea, San Jacinto Mountain, the San Andreas Fault and the cities of Palm Springs and Palm Desert. 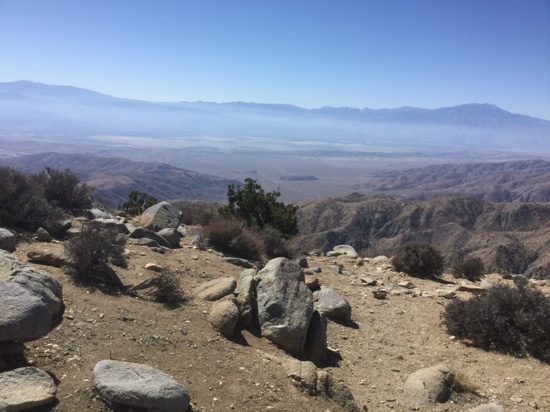 Our last day in Joshua Tree, Day 19, found us heading back to Twentynine Palms to get water at the visitors center. We also had more time to see the exhibits and then walked the trail around the Oasis of Mara and checked out the fan palms: 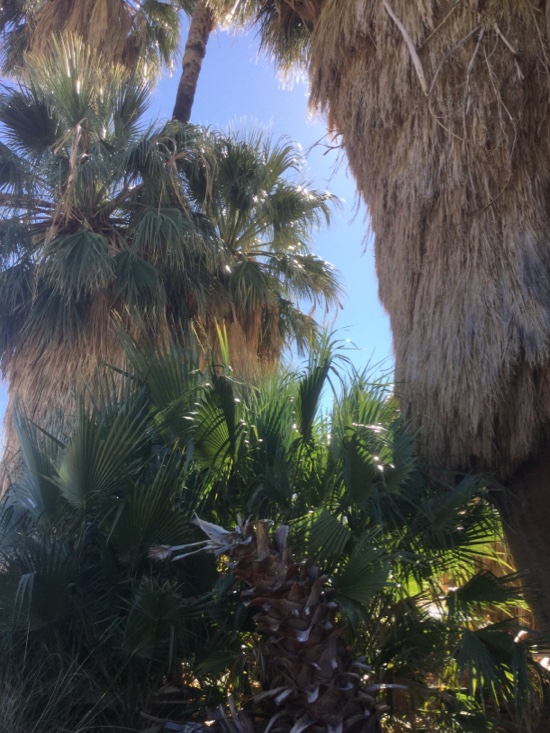 After stopping for groceries and gas in town we’re all ready to leave tomorrow morning. This one will be a short hop so happily we don’t have to get up at the crack of dawn. But we’ve finally hit the turnaround point of this trip so our compass will be aimed mostly north from now on. Is my buddy the phainopepla singing goodbye? 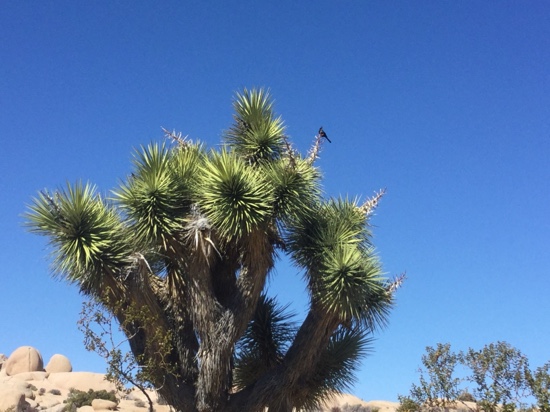 Love Love Love the pictures & the travelogue. With all the rain, snow & hail - this afternoon, it makes a lovely change!! I can't wait for summer!!!