Hello! I’ve been sewing up a storm the last while. Well, ok. Maybe not a storm. Slow sewing at its finest perhaps. Things with a gazillion pieces and lots and lots of topstitching! I finished yet another shirt for Thom. He’s wearing it today but I haven’t been able to capture him to get any photos yet. Hold that thought.

i do have a couple of pics of my latest though, the Pin-Up Girls Ingrid Non-wired Bra, a new pattern from the wonderful and amazing Fairy Bra Mother, Beverly Johnson! 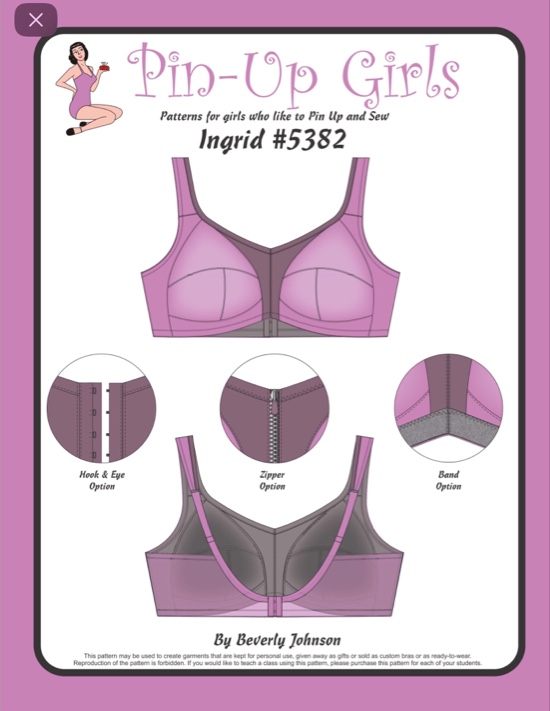 What I liked about this bra pattern was first and foremost the lack of underwires. I’ve tried but I don’t think this body is ever going to be really happy with a wired bra. The multi-pieced cups on the Ingrid give good support without underwires but avoids the dreaded “uniboob” look that can happen with some non-wired bras. Engineering at its finest! I also liked the good amount of coverage as well as the padded straps. Maybe not sexy nor lacey though it could be if that’s what you’re going for! I prefer relatively plain and functional myself. This first tester version used a bunch of supplies that I already had: 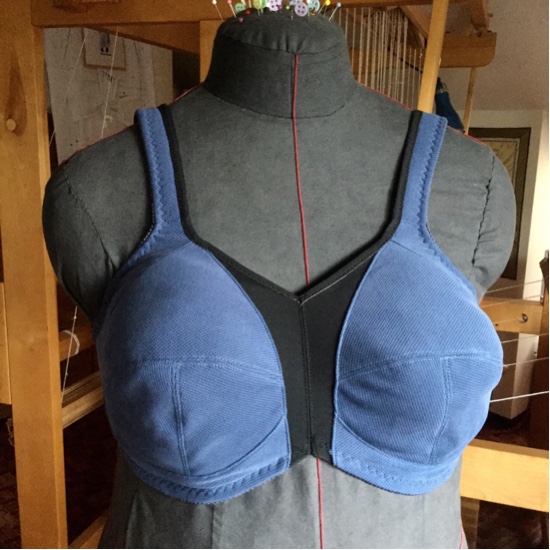 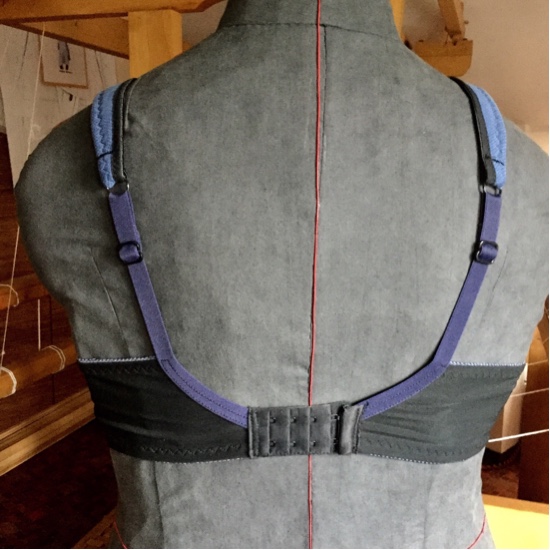 Not too shabby! Kind of resembles the purple and black version on the Bra-maker’s website. Unfortunately if it fits Debbie Double then it’s a little loose on me since she has no squish factor. I’m wearing it anyway but I might just spend the time and pick out the stitches on the hooks and eyes and strap elastic so I can shorten the band. Big job so I’m not leaping to it! The cups fit really well though and it’s very comfortable so I’ve already cut out Tester Number Two with a size smaller in the band. I only needed to cut and overlap one pattern piece, the back band, because every other piece was unaffected. So easy!

While I’m talking sizes I should mention that this was the first of the bra patterns published using Beverly’s BCD sizing system. So simple to understand! Everyone should get on this bandwagon. Two measurements, the Bottom Cup Depth from underbust line to the apex and underbust around the body, and that’s it. Trace off the pieces for your size cup and the back band piece that corresponds to your cup size and band length. The straps are the same for all sizes. Once you’ve made the tester bra you will know if you need to go up or down a size in the cup or band. As I discovered with my band because I’m actually between sizes and I should have gone down instead of up. Doh. Conceivably I could have gone between the two sizes but I think tighter is probably better for me.

The one fit adjustment I made was to move the straps inwards for my narrow shoulders. It worked perfectly! I followed Beverly’s blog post on how to do it which made it easy.

Making a bra isn’t really all that difficult but there are a lot of wee little pieces and a lot of different elastics and findings. This one took four fabrics: cup fabric, sheer cup lining (because the blue stuff is too stretchy), power net and cut & sew foam. It also took four elastics: 5/8” band, 3/8” side, 5/8” strap and 3/8” fold-over. Plus 5/8” rings and sliders and a 2 x 4 hook and eye. (It really only needs a 2 x 3 but I had this one available.) Whew! Sewing it together gave me an excuse to use several different feet and stitches on my new machine too. Not to mention my cup ball stand that Thom made me for pressing. I definitely love my Janome. She did a great job even though I had to change thread colours a bunch of times.

I found that the recommended yardages for fabrics and elastics were considerably more than I needed for my size. I guess they cover up to the largest size? I can cut all the cup pieces from two layers of fabric 10” x 16” (being careful with the DOGS - direction of greatest stretch). That means that I can actually get at least 2 bras from the .5 M listed. 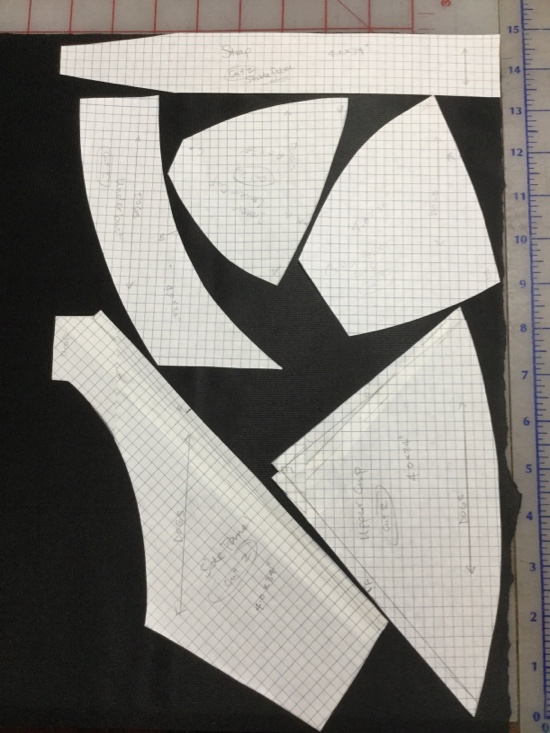 Yes, I’m good at 2D puzzles and Tetris! I can also get the pieces that need to be cut from power net from just two layers of 8.5” x 10” so I could get lots of bras from .5 M! I did an inventory and the math and figure that if I went for multiples I could make a bra for around $20 Canadian with all the supplies from Bra-Makers. They aren’t cheap but they’re Canadian (no exchange or duty for me) and good quality. Plus lots of colour choices for fun! I would buy the parts separately though because the findings kit for one bra alone is $19, not including the cup and band fabrics. I guess you pay a bit more for the measuring and packaging which is only fair. Sure convenient though there’s a little more waste than if you used exactly the amount needed.

So the next tester bra will be a black and brown one. I found some leftover brown Duoplex that fit all the cup pieces and a brown findings kit for the Pin-Up Girls Classic bra that I hadn’t used. Just eliminate the wire channelling and substitute some brown FOE from stash for the fancy upper front elastic and all the rest of the findings work for the Ingrid. The power net parts and strap padding are again black because I have lots! I see more thread changes coming...

And then if this one fits the way I hope then the next one will be the first of the Black Cherry bras. Yum! And I could definitely make a Black and Cherry one with what I have on hand. Then I have enough of the cup and band fabrics for more but no more coordinating findings so there will be another order in my future.

Meanwhile, out to rake the leaves! The walnut tree is finally letting go. It’s been slow this year. Now it’s finally starting to feel like November.