Wow! I’m exhausted! That was a crazy weekend. On Saturday we met our Darling Daughter and Almost-Son-In-Law for a picnic and to watch the first Canadian Flugtag event. Sponsored by Red Bull sports drink with free admission, it’s a competition of human-powered flight…right into the water. It’s kind of hard to explain but costumes, skits, dance routines and videos all figure into the equation, along with the actual “flight” itself. My mouth is still sore from laughing! And my shoulders are still sore from sitting in the sun for 4 hours. I got a couple of photos but I was pretty far away on the top of the bleachers. Here’s the venue, beautiful False Creek in Vancouver with the silver dome of Science World (or whatever the heck they call it these days): 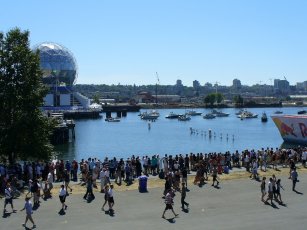 The contestants were shoved off the flight deck at the far right there and the white buoys marked their landing distance. (Hah!) Then the pilot and crew (most jumped after their machine) got scooped up out of the way by helper boats along with their equipment and transferred back to shore. And here’s the second place winner, “The Pirates of False Creek”, waiting their turn. What’s a pirate’s favourite letter of the alphabet? ARrrrr... 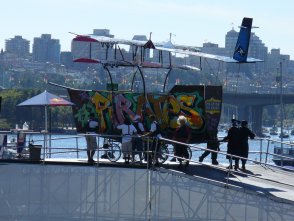 And this proves that pigs do fly — sort of: 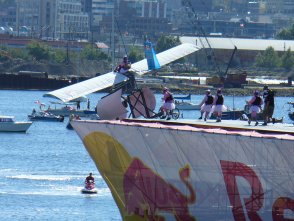 Their costumes were really cute with little pig noses and ears and tutus. There was the “Egg Man” (which hatched in mid-air), a Saskatchewan elevator, a boom box (People's Choice award), a moustache, a lobster, a flying skate (“Air Hockey”), a giant sushi driven by a shrimp-girl (which went farther than you’d expect), a chariot that worked as a slingshot launcher, a wagon full of poutine, and many more — some of which actually looked like airplanes (boring). Though only one really flew any distance: the winner “The Big Shooter”. There also were sky divers who launched from a helicopter way up high and came down with smoke and acrobatics to land on the flight deck. The very first one missed but he managed to do it the second time at the end of the show. It was pretty exciting. OK, I’m easily entertained. Go click on the link for more silliness. Don’t know if I’ll go again next year, but it was great fun.

While we were at it, I was able to gift my Almost-Son-In-Law with his socks. He was pleased with the colour but since it was ninety-million degrees hot, he didn’t try them on. Here they are: 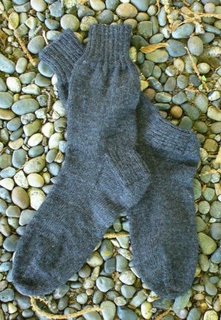