AH-HA! Marriage is insidious. It even sometimes catches the wary — like the Yarn Harlot. (Big kudos to her and her Joe actually finally tying the knot, the same one that they’ve had loosely tied around them for so long!) Yes, I do believe in marriage: two people (of whatever sexual persuasion) joining their lives together in a meaningful and public way. I’ve been married for 35-1/2 years and it’s been a wonderful life. One of my kids is married and the other one engaged to be married next spring. Even my parents were “until death do us part” and now they’re together again there in heaven. I’m a HUGE big believer in the institution of marriage. Not the one that all the religions tout, but the real one in both of your hearts. OK, so some…maybe a lot of them don’t last. So what? Maybe they went into it with the wrong ideas or not quite the right intentions. Maybe they weren’t the right match. Maybe one or both screwed up. However, I totally believe that when it works (and it does more often than we acknowledge), that marriage is the binding of two hearts and two lives together inextricably. I would have been married even longer if we had been older than almost-18 and just-18 when we met! It took 2-1/2 years to convince our parents that this was it. We were life-bonded. And we were getting tired of waiting until we were old enough (by their standards) to actually get legally hitched. Yeah, we’re weird — I think I’ve mentioned that in previous posts!

My daughter is in the midst of planning her wedding. (Yes, he’s definitely a keeper. Even if he doesn’t like spiders. It’s just a minor flaw and we all have them.) However, this wedding is a little different. It’s a full-on SCA period costume wedding. The Society for Creative Anachronism (at least the local branch) covers the 650–1650 AD European time-line. Daughter was thinking maybe her dress should be Byzantine. Everybody else is on their own for time and place and I was a bit disappointed to find out the distinctive costuming from the Greenlander period I was thinking of was totally historically incorrect. Darn. Back to the drawing board. I have no more ideas but I only have until April to come up with something for myself and of course also for the T-Man. And I may have mentioned within earshot that I might be interested in beading a neckpiece for the bride. Did I say that? So far I haven’t found anything definitive enough, but I’m open to suggestions. April comes awfully fast, doesn’t it? Erg.

Our best advice for those contemplating marriage has always been “Never both go temporarily insane at the same time.” Both of you will have your off-days, your insecurities, your hard times, your doubts. But as long as one of you is strong and sure (even if you’re faking it!), the other one will be supported and everything will turn out fine. Also, cut the other some slack and as the cliché goes “Don’t sweat the small stuff.” I’ve seen so many relationships falter on silly little nit-picking details that Don’t Really Matter. AT ALL. Lastly, watch what you say and how you say it. No, don’t keep everything to yourself. You can express your feelings and your opinions. Just do it with respect and caring and (dare I say it) diplomacy. It can be done. We do it all the time. And always be willing to forgive. But only if they REALLY mean it and actually try to mend their ways. We won’t even discuss the personality disordered crazies that can only be survived if you run fast in the opposite direction. You wouldn’t get involved with one of those, now would you? Not if you value your happiness and your own sanity. Pick the right person and follow these simple rules and all will be well. Granny Damselfly has spoken. She knows whereof she speaks.

In Crafty News, for T-Man’s dark grey socks are blocking as I type so no photo yet. I’m soooo tempted to cast on another pair of plain socks, but I’m knitting on the Little Squares Sweater instead. I need to spin more yarn for this sweater though so I may not get too far on the knitting until I do the spinning. Still haven’t touched the Pomatomus Socks yet.

Yesterday we both worked at getting the house vacuumed and dusted and then went outside to clear out the tomatoes and cucumbers from the greenhouse. There’s a whole bucket of green and starting to ripen Juliette tomatoes in the kitchen now. I transplanted a few lettuces, mizuna, and endive from the garden into the empty space in the greenhouse along with a few little sprouting onions. Everything was really dry in there so I watered well. Hopefully the greens won’t bolt immediately in the warmer temps inside. I left some in the regular garden too, hedging my bets. Lots more work to do out there however. I still have leeks, broccoli, onions, and some herbs (parsley, rosemary, thyme, oregano, chives, and garlic chives) so it’s not bare. The rest has to be pulled out and composted. It’ll keep us busy for the next few nice afternoons.

Heading off now to my bro-in-law’s for Thanksgiving dinner with the ever-extending family. T has to work on most stat holidays so we usually have big family do’s on the Sunday. We’ve got lots to be thankful for!

The photo today is Textures from our holiday. 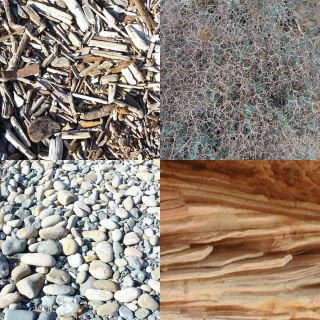 Beautiful photos! i love texture shots. the world is full of bounty.
~Julie