Have you ever had a series of unfortunate events? Of course you have — happens to everybody now and again. Or some people just kind of attract ‘em like flies to sh*t. In this case, since my life is usually pretty good, when there’s a series of stupid/bad/dumb things in a row I tend to notice. Most things are not too major and eventually get worked out one way or the other. This time was no exception to that, but I could have skipped oh, say the last 24 hours and be a little happier about it.

I’ll spare you the boring details of everything that went wrong but you might learn a thing or two from one of my tales of woe. Suffice it to say that buying software in a retail store is not a good idea. Even though they package it in some supposedly thief-proof plastic thingy that needs a special tool to open, I still managed to buy an empty box where a program should have been. It was a singularly compulsive buy, since I hadn’t planned on upgrading right that minute but you know how it is sometimes. T-Man bought a few things there and I guess I just had to have something for me. Being already in the store, I skipped my usual process of checking out the software online for price, latest version number, and whether it could just be downloaded and went home with an empty box. Doh. Turns out that 1) it’s not the latest version and 2) I could have downloaded the latest upgrade for $20 cheaper, even with the hefty rebate offer on the box. Of course there was no returning it once it was opened (store policy) so I had no choice but to see if I could get a replacement. I woke up this morning (super-early too) with a migraine and forlornly walked the kilometer and a half back to the store. Why are they more friendly when you’re trying to buy something than when you have a problem with something? Oh sorry, rhetorical question. After waiting in a slow line for assistance, they did find another copy (I would have taken a bet that that my dud was the last one) and opened it to show me the contents were actually there. Me and my headache wandered back home though I haven’t installed it yet. I’m almost afraid to. It had better be better than the ancient version it’s about to replace. Or else. Cause I’m not going to upgrade it again soon. Note To Self: In future, buy software online from the company that created it preferably after checking every aspect carefully and if possible downloading and testing the trial version first.

On the positive side of the technical scene at Damselfly’s pond, I now have a new flat-panel 19” monitor and a lot more real estate on my desk and on my screen. The Gargoyle is already happily ensconced on it in his usual spot. I was previously using my daughter’s old 17” CRT monitor but this one is much nicer! However I’m sure I wouldn’t have replaced the old one right now (since it still works) but I lucked out. Before we went on holiday, T bought himself a new HP Media Centre PC after his old Mac laptop bit the dust and this monitor was part of the package. When we got back we decided we needed an even bigger monitor on his computer so we can watch recorded TV from our bed. And then of course we needed new speakers to go with it. It feels awfully decadent to relax on a pile of pillows eating supper, cats tucked up against our legs, and watch the new TV season in comfort. The old TV in the living room is getting lonely, though it does come in handy to record (on vintage VCR tapes) occasionally when 2 good programs happen at the same time. We haven’t gotten around to watching anything we’ve taped yet. It’s too cushy in bed — even with the risk of crumbs in the sheets!

Back to the negative, though fibre-y instead of electronic. I was trying to finish T-Man’s dark grey socks and ran out of yarn on both of them about a centimeter short of the end of the toe. I only needed about a meter more to finish! Argh. Guess I made them a smidge, like a row or two, longer on the leg than I have before with this yarn. Unlike most sock yarns that have 210 m, it only has 160 m per 50 g ball so it’s a wee bit thicker. Luckily, I had another ball that I was saving for something else so I could test out my joining methods and finish the socks. They still need blocking and photographing, though they’re just plain boring dark grey socks. No thrills, no chills, no frills.

I’m not going to start another pair of socks immediately this time. I’m determined to finish my Pomatomus socks that have been languishing untouched for so long. I even dragged them all over in the van during our holiday, but never even opened the Scooby-Doo lunchbox except to take out the scissors. These socks take too much concentration for casual knitting. The kind I like to do while reading. Did I mention that T-Man bought me a cool book-clamp-holder-thingy that holds the pages open for me at Powell’s book store in Portland? It doesn’t hold the book upright but I usually can find somewhere to prop it so I can see the pages. I’ll have to show you in a photo sometime. I looked all over town before we left for something like this with no luck. It’s not perfect, but it helps. 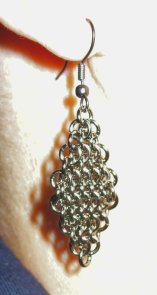 Just for more craft content, here’s a pic of one of the 3 pairs of chain maille earrings that T made for me on our holiday. He bought some base-metal rings from Shipwreck so he could play with them and learn some techniques. These are kind of dark gunmetal and although a bit heavy, I like them. I need to photograph the triangle earrings and bracelet set in copper and gunmetal that he made last. They’re very nice.