I know it’s not winter solstice yet, but I think somebody forgot to turn on that big light in the sky today. I have lights on all over the house just to see where I’m going so I don’t bump into things. Which means that photos have to be taken with the nasty flash turned on or adjusted in Paint Shop Pro. Sorry about that. And speaking of photos, I was hoping to have one or two showing the amazing colours we saw at the aquarium on Tuesday, but I forgot my camera and T-Man can’t figure out how to get the pics he took off his cell phone. He did it before but now he can’t remember what he did!

Well, the day just got brighter! I just got my new spinning wheel, a Louet Victoria!!! She’s so cute. However, I did think I had ordered an oak version and this one is beech! But I'm NOT going to send her back because we've already bonded. She has spun her first wool yarn and she's MINE! That was pretty fast from the time she was mailed especially at this time of year.

I've already explored setting Tori up and packing and unpacking her. It's not at all difficult, especially since I'm used to folding up my S-90 and the Ashford Joy that I teach on in Birkeland Bros. I think it's a wee bit easier than the Joy to fold though more fiddly to get in the pack which is not as high a quality as Joy's optional one. On the other hand, it's included in the price. I do like that there are so many options for carrying the bag but they could have been a centimeter longer on one of the inner straps. It's very tight! I also would have preferred padding rather than the fibreboard on the bottom. It would rattle less and be more comfortable to backpack. I got the backpack straps out and tested her weight. Not unbearable for reasonable distances and should work fine to carry on the bus. The big outside pocket can hold a lot of other tools and fibres, though of course that will add to the weight and the bulk. I'm not overwhelmed with the lazy-kate but it's true that the fibreboard bottom does cut down on the weight factor and it's nice that it fits inside the pack. I'm a bit concerned that it may warp in the future though, so we'll see how that goes.

She spins very nicely even if I only use the right treadle. (I'm not a huge double-treadle fan so it's nice to have the option!) As with all Louets the sealed bearings are very smooth. There's a teeny bit of rattle with the bobbin, but that may settle in. Otherwise there were no squeaks right out of the box. I'm also not a huge fan of Scotch tension but it's a lot more adjustable than the bobbin-lead/flyer brake system of the older Louet wheels. I do like the slides instead of hooks - very adjustable. And there's no need for an orifice hook because the slot in the orifice is long and close to the end. Nice. She does have to be on a really even surface though or there's a bit of wobble when treadling. A small non-skid mat might help there.

Now I’d like to know about the high-speed flyer that Louet mentioned. Are they in development yet? Because I sure would like that option! Neither of my other 2 wheels have very high ratios and it would add to Tori's versatility. She might as well be all she can be, hey?

Here’s some photos including Klaas the S-90 bonding with his new baby sister: 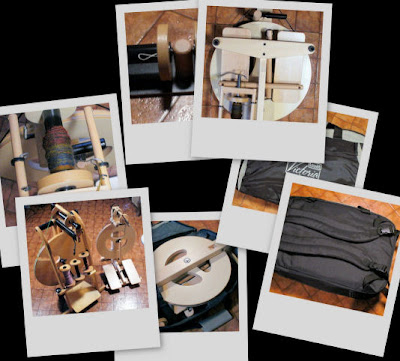 And it just started torrentially raining out. No wonder it was so dark.

Wow lucky you! Arrival of a spinning wheel on a dark day like today to bring cheer! I live on Vancouver Island and I could have used such a pick me up today :)