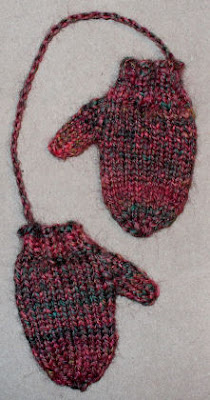 Comments: I used the pattern pretty much as written though I used smaller needles. I changed the ribbing from k1/p1 to k2/p2 and I did the thumb on 3 dpns (instead of i-cord) before carrying on with the rest of the mitt. They turned out about 2 inches tall. I made 2 and attached them in a pair by twisting the cast-on tails together and stitching the ends into the opposite mitt. Cute!

I made these for my weavers guild’s Christmas Ornament Exchange that we have every year. It was a quickie project!

So what have I been up to since last Friday? On Saturday I went to my Spectrum surface design study group. That’s where I started knitting the mitts. We chatted and shared and ate a great potluck lunch. Then we planned our study focus for next year: felt. There are so many aspects of felt that we figured would interest all of us. Some spin, some knit, some weave, some sew, but one thing we all do is dye. So at our January meeting we will dye some easy-felting wool roving in preparation for the meeting after that where we will try making little wet-felted beads by hand. We may also dye some yarns so we can weave or knit them into something that can then be felted in the washing machine later on. Since my dye studio is the largest indoor one, we’ll be doing the initial dyeing here. T-Man will like that because he can participate in lunch!

Some other plans are to explore different “nuno” felting techniques using chiffon as an interlayer to allow lighter, more durable felt pieces and, for those of us who weave, playing with some weave structures that give an interesting bubbled or holey fabric when fulled. I had a flash of inspiration in a magazine which I glanced through but didn’t purchase where a “deconstructed” scarf was knitted with regular areas of dropped stitches and then fulled heavily. Extended eyelets could be used in a similar way. And there’s always crochet which easily creates holes in a solid fabric. I’m not sure if anyone in the group crochets except me though. I’ll have to find out!

I also want to get out my knitting machines and see if they still work. With them I can create large areas of fabric quickly that can then be further manipulated. One way is to tie washable items into the fabric, such as coins, corks, wood beads/balls or child’s blocks, and then full. The knitted (or even woven) fabric between the items becomes felted but where the items were tied in stays bubbled out. This has been referred to as a form of shibori which I suppose it is except that it is missing the dyeing part of tie-dye. But I tend to think of it as cloqué, which means “blistered”. However, surface designers often use this word for fabric that has been chemically treated to make the cellulose yarns in a mixed-fibre weave shrink which also creates a blistered fabric. Does it matter if it’s wool that is fulled or cellulose that is chemically shrunk — they are both shrinking differentially? One website that uses the latter term for what we call nuno or laminated felt is Silk Cloqué. Ah, fun with nomenclature.

One last area we can play with, perhaps in combination with some of the above techniques, is needle felting. The nice thing about it is that it’s a dry technique, suitable for sitting at a table and chatting rather than working hard and messy. It can be a surface addition or more 3-dimensional and free-standing. This list of study ideas will get edited and added to as we go along. Some of us will work on our own to facilitate showing the rest of the group how to do a given technique. And some will expand on what we’ve experimented with together to make more elaborate projects of our own. That’s the nice thing with this study group — no pressure to produce but lots of things to learn.