Well it must be another weekend coming up because they are predicting that our lovely warm (not hot) and sunny weather is coming to an end for the next few days. What is it with this continuous bad timing? T-Man is on-call this weekend so we are stuck at home in case he needs to get to his computer. We were planning to do some work on the area from our side gate (we’re on a corner lot) to our back deck. It turns into a slippery muddy mess in winter so we’re replacing the bricks and grass with a combination of pre-fab concrete blocks and fake cobblestones using a mould and hand-mixed concrete. Any cloud cover will be welcome but rain needs to hold off until we’re done. I’m not holding my breath.

Speaking of decks, we’ve had another visit from the masked marauder judging by the muddy footprints on the deck. How that raccoon gets so muddy when it’s been dry weather for days I don’t know but he sure likes my water garden on the upper deck. Oh wait! I know. The watering hose in the garden is leaking and I bet he’s been playing in the mud around there. And then tracking it up to wash his paws in the water garden. The footprints are huge, about half the size of my hand, so I’d hate to run into him by accident. Since he comes before dawn it’s unlikely, but dawn is getting later every day and we get up earlier than that now. Who needs to go out of the city for wildlife, eh?

And speaking of wildlife, the latest news about the city strike is that some protesters dumped a bunch of garbage on the mayor’s doorstep, an upscale downtown condominium, early this morning. (Around the same time as the raccoon’s visit! Obviously he didn’t do it.) They’re calling it “Sam’s Strike” because they blame the mayor for not doing something about the ongoing labour disruption. It’s pretty sad seeing the public swimming pools growing green algae and the park flowers shriveling up from lack of water. Community centres and libraries closed. Even Stanley Park’s Nine O’clock Gun is silenced because they ran out of charges. Meanwhile I haven’t yet filled my second garbage can though the recycling box in the basement is getting really heaped. Helps to have a compost pile and to shop with a backpack and cloth bags. I’d have even less garbage if we hadn’t done some housecleaning in the attic, held a large birthday party and babysat the grandkids several times. Those disposable diapers fill up the can quickly! Even so most of my garbage is non-recyclable plastic packaging and meat bones which I can’t compost because of the rats. Who, by the way, are having a gay old time in the city’s unsecured garbage! Surprisingly though, the city is not a whole lot dirtier than usual – at least anywhere I’ve been. Some folks are packing their stuff over to other municipalities and paying to dump and there are a number of private disposal companies who are benefiting bigtime. Seems the city’s unions are kind of doing themselves a disfavour by going on strike as more public work gets privatized out from under them.

Rant over. Told you yesterday not to get me started! Where was I? Oh yeah. More spinning. This is the black Shetland combed top I finished up yesterday. 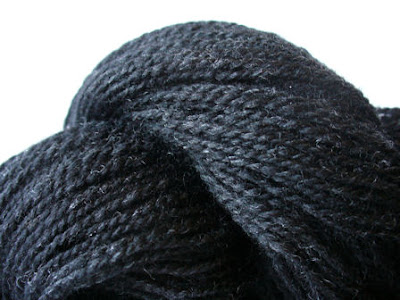 You can actually see the little white hairs in the black wool. I have about 243 yards/50g in this skein. I had some trouble spinning this stuff at first. It was sticky and my yarn was coming out thick and thin. I tried stripping it down into smaller strips and pre-drafting (which was just as sticky to do) but that didn’t help. Until I got the bright idea to try the other end of the strips. Duh. This stuff is like the cotton sliver I’ve spun in the past. It has a “nap” where one end drafts easily and the other goes jerk-jerk-jerk. After that light bulb moment it was a breeze to finish. I probably don’t need nearly this much yarn but I’d rather err on the side of way too much than not enough. And it was so pleasant sitting out on the deck with Tori the wheel, my Palm T/X with earphones for podcasts to listen to and a cup of tea. I plan to do the same thing again today only with a different fibre.

This morning I indulged in some knitting on my Hepburn Cardi which I haven’t touched in awhile. I got another inch or so done on both sleeves. I have nearly 10 inches done now. At this rate I might have the sweater done by next summer, maybe? Too many things are calling for my attention right now as summer (and the good light) winds down. I also got a few inches of the Crosshatch Socks done last night while watching Dr Who. Unfortunately I have to look at what I’m doing quite a lot which makes it difficult to see the action onscreen. That means I don’t have anything plain on the needles at the moment. I hesitate to start something else though because that will divide my time up even further than it is already. Things seem to take a heck of a lot longer to complete when you only work on them a tiny bit at a time. And there is a deadline of sorts for the Crosshatch Socks and another one not much later for the next pair which I haven’t even started yet.

Oh, and Happy Eighth Birthday, Blogger! You’ve become a big part of my life. Thanks for my 2+ years of memories. Keep on blogging!