No, this post isn’t just going to be all boring Damselfly Musings (though there might be a little in here somewhere towards the end) but I also have some more stuff to show. It’s so nice that there’s actually sun outside so I can photograph things with natural light. I’m taking advantage while I can.

First up we have some spinning. This is the Exotic Wood colourway of Ashland Bay’s combed merino. It’s about 40g spun it into a fairly fine 2-ply — around 173 yards total. I’d tell you what that works out to in yards per pound except that’s too much math. Nearly 2000 ypp, I think. It’s a little thinner than sock yarn so I’d call it laceweight. Pretty huh? 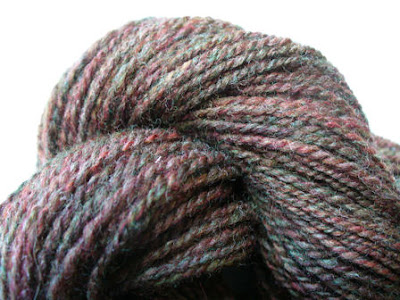 This is a closeup so it’s larger than reality. I have several more colours to spin up still. These are for the Icelandic Shawl from Knitting Daily. It’s turning out to be very “deep woods with a glimpse of lakeshore” in feel. I’m liking it so far.

Next we have the Crosshatch Socks for DIL’s birthday. I’m enjoying the texture but you can’t really see the holes much unless it’s stretched out on the leg. This is one of those “true lace” patterns with something going on in every row. No plain rows. It’s pretty simple however. Here’s the chart:

The original pattern is in More Sensational Socks by Charlene Schurch but I made this one in my Knit Visualizer program so I could have a large reference copy in my Sock-Box, held inside the lid by magnets. (Unfortunately I keep losing my magnet strips. They aren’t very strong. Better than Post-Its though.) I do like the way the subtle colour graduations don’t detract from the lace pattern: 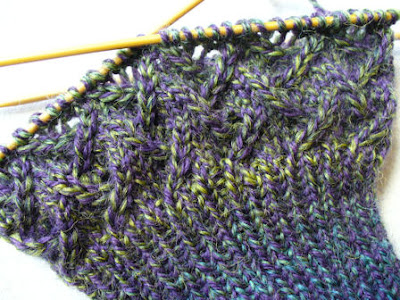 I was trying to find out what colourway this one is (blues/purples/greens) but I don’t have the label. I think it’s Meilenweit Mega Boots Stretch #704. I like this stuff because it’s soft, slightly stretchy, very thin, and you don’t have to worry about making matching socks because you can’t match it even if you try! However a pair of socks costs nearly $20 including tax so it’s not exactly cheap. But so what? Neither T-Man nor I have been able to wear out a pair of these socks yet. And the way the colours are variegated and plied, I can’t even imitate them with dyeing my own. Not like all the handpainted yarns out there which are lovely, but nothing I can’t do myself.

With all that stuff out of the way, on to the musing or rather a rant (which you can skip if you want). I’m getting just a little more than annoyed by some folks’ rudeness and impatience. I’m usually pretty easygoing and tolerant but I saw someone almost get run over while crossing the street by a woman in an SUV with a cell phone to her ear who obviously didn’t want to slow down even for the few seconds for the pedestrian to pass in front of her. She actually yelled epithets at her (an older woman with her arms loaded down with grocery bags) when the pedestrian could have already been across the street safely if the driver had only lifted her foot from the gas for a few seconds instead of accelerating. Unbelievable. Every time I see something like this (and I’ve seen far too much of it lately) I want to take the perpetrator and sit them down, massage their shoulders, tell them to close their eyes and relax. Recite a mantra. Maybe take up spinning or knitting. Get more restful sleep. Start earlier so they aren’t in such a hurry. Turn their cell phone off. All they’re really doing is shortening their lives — and possibly someone else’s if they run them over. A permanent state of stress creates serious health problems that we don’t need. Learn techniques to avoid it. Chillax. Live longer.

When I was a girl…gee, I sound like an old granny. Oh wait! I AM an old granny! Well, maybe not old — but a granny nonetheless. Where was I? Oh yeah. When I was a girl lo those many years ago, pedestrians had the right of way. Cars had to stop for them. What a concept! It was the law and they could have been given a ticket if they didn’t stop. As far as I know, the law hasn’t been changed. Just nobody enforces it any more so drivers think that they, in their metal-reinforced world-polluting behemoths, have sole rights to the road. And they are always in a tearing hurry to get somewhere. Sad really. They should walk more. Smell the flowers. And the garbage. (Whoops. We’re at the end of Week 4 of the city workers’ strike. Don’t get me started on that one.) Slowing down is better for your body (exercise) and your mental health (time to think). Try it. You’ll like it. Can you tell I don’t have a driver’s license? Personal choice made a very long time ago and only occasionally regretted since.

"Start earlier so they aren’t in such a hurry." -- Funny you should bring this up. After watching some of the drivers around me this past week I've decided one of the best things I can teach my kids is to start early so we can take small delays in stride (without running down pedestrians, oh my god!). It'll be a tough one for me to model but I think we'll all benefit.

Yes, Cynthia - that's exactly what I meant! If you're always feeling late then you'll do stupid things to catch up. But if you've got a little wiggle room, you can take any delays in stride. And are there often delays in real life! Great lesson for your kids.