So exactly how many blogs or podcasts can one keep up with? How many magazines and books and newspapers can one read cover-to-cover? How can one stay on top of the fibre world and still have time to do anything else? I need to know this because there’s only 6408 people in front of me waiting to get into Ravelry! I’m afraid once I get in there won’t be one minute left in the day to go pee. I’m already having trouble getting housework, cooking and gardening done. This could be one of those situations where I won’t allow myself the pleasure of indulging until at least some of my chores are finished first. Yeah, right.

I’m still a bit skeptical as to where Ravelry will fit into my style. Kind of hard to ignore a lot of folks whom I admire madly chanting its praises though. This includes several members of my beginner spinning class who were cheering at getting their invitations. It’s starting to take on the aspect of Exclusive Club, doncha think? As #23999, I feel like I’ve got my nose pressed up to the window trying to see what all the hoopla is about inside. Guess I’ll find out soon enough! They’re letting people in more quickly now, even though they still aren’t actually “live” yet. And there’s almost 12,000 behind me still! I bet nobody was expecting this level of participation and excitement over an interactive knitting and crochet community. For more blather, listen to Jess and Casey (Ravelry’s creators) over on Stash and Burn’s recent podcast.

I spent yesterday (in my ancient dressing gown – don’t ask) helping a friend adjust a blouse pattern to fit her Big Girl figure. I had already adjusted it quite a bit several years ago but the back shoulder area needed a bit more tweaking. The first one was in handwoven silk and she wore it often enough to just about wear it out so she knows this one will be another popular item in her wardrobe. She plans to make a replacement garment again in her own fine handwoven and hand-dyed silk/linen fabric. It feels lovely, all crunchy yet with a flattering drape. Shoulda taken a photo of it while I was fondling it, shouldn’t I?

In other crafty news, I’m just starting the toes on the Crosshatch Socks. Haven’t touched the DDD Socks at all in an attempt to finish the Crosshatch first. I’m slogging away in the Icelandic Lace Shawl centre doldrums. The stitch is a simple [k3tog, k1p1k1 in next st] repeat and then, after a plain knit row between, work a k1p1k1 over the k3tog and knit those made-3 sts tog. There are decreases at the beginning, middle and end of the pattern rows which automagically staggers the two elements and decreases 8 stitches at the same time so there’s really only one pattern row. I guess that’s why it feels like it’s going on forever! It does make a cute mesh of puffs and holes which leads me to continue slogging and the rows keep getting shorter so there’s a definite end out there. Then I have to pick up the opposite end and carry on for a while longer on the outside edge of the triangle. It’s the process that counts, right?

So I’m feeling a bit better today from whatever bug hit both T-Man and me this last weekend. It’s a bit like a cold but not too sniffly. It mostly just knocks you flat with no energy. This effect still comes and goes so you start something and then poop out quickly. Not terrible — just annoying. And it’s T’s birthday today! I forgot to wish him a Happy Birthday at 5:30 am this morning so I sent him an email. How romantic, eh? LOL! Now he’ll be my Old Man for a month or so until I catch up in early November. He already bought himself his birthday presents: $600 worth of new clothes, a very expensive chuck for his lathe and a lovely turned wooden platter made by his friend (and guild president) Bruce Campbell at a guild auction. (No, not “Army of Darkness” Bruce Campbell! This Bruce Campbell!) I can show you the platter which is now on display on our buffet: 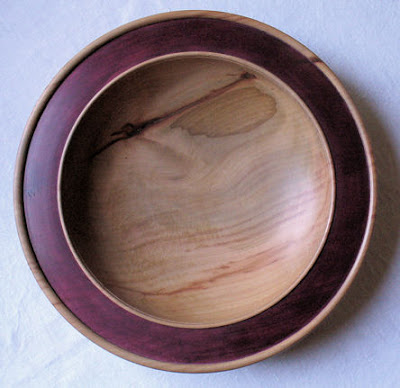 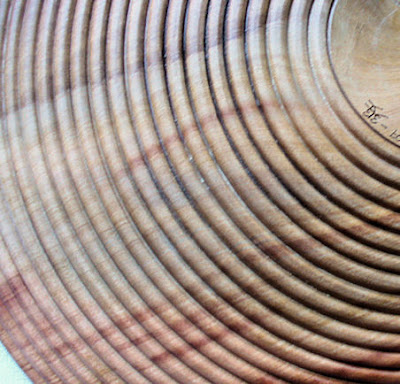 Front and back. Init purdy?

Hi... I'm 6747 from getting my invite, so I'm just behind you a little. I figure by the time I get in, all the interesting people will have lost interest and moved on to the next big thing! Actually, the idea of inventorying the stash makes me very squeamish. I have an ideas of what's there, but I'm not sure I can bear to reveal my dirty little secret (i.e., my fiercely acquisitive mind) to the rest of the fiber world.

I just came back from a week at a knitting workshop in New Hampshire, and revealed to myself how bad I am: actually found myself planning to skip dinner on the ride home (it's a 5.5 hour drive) in order to buy one more skein of sock yarn. Now that's more than ove of yarn, that's sick!