Yesterday I spent several hours babysitting the grandkids while my son, daughter-in-law and husband all worked on fixing up and cleaning the townhouse for sale. I managed to mostly stay off my foot (though they have a zillion stairs!) and had a good time playing with the baby and having my granddaughter show me photos, mostly with her in them. She likes the ones when they were in England visiting a real castle. It figures because her favourite things are princesses and mermaids. She showed me a photo of her wearing her fairy wings and told me “just like Tinkerbell”. Cute if somewhat scary. At 3 she’s totally Disneyfied, poor thing! She even has Barbies with mermaid tails. Heh! I know — I probably would have given my eye teeth for those when I was little. I had my own Barbie with a blond ponytail and her friend Ken with a crew cut. That Barbie chick is really an old lady! They just keep giving her makeovers.

Today I’m still trying to rest the sore foot before I have to go teach my last spinning class this evening. It’s getting better slowly and I’m not limping as much but I don’t want to stress it too much. I know won’t be able to help running around the class and standing the whole two hours. So meanwhile I wound the yarn my daughter dyed for herself on Sunday into balls and am starting on her socks. 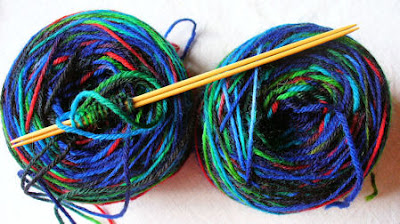 I know, I know. I shouldn’t be starting yet another project. This is just so I can have a plain knitting project to work on because I’m getting way behind on my email reading! I won’t yet start the daughter-sized Tulip Socks that I was going to make for her birthday so she will have these ones first. While I’m at it, here’s the yarn I dyed for the next pair of T-Man socks. 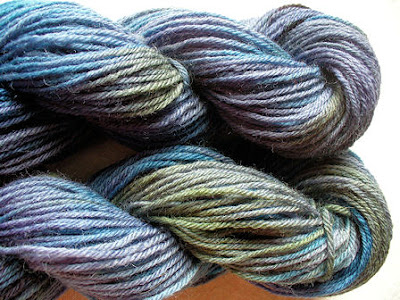 I was a bit annoyed because one skein got really dark spots on the relatively light denim colour with hints of green and purple. If both skeins had got spotted, at least they would coordinate but it’s only on one. Boo-hoo. But T says he doesn’t really mind. If it looks too horrible I can always overdye the finished socks in a dark colour but that would mean losing the lovely soft colours that I have now. Obviously I didn’t pay enough attention to what I was doing. The dye stock probably didn’t get stirred up enough. That was the only thing I got done Sunday for myself because I was too busy helping everybody else. And gimping around on my taped-up foot.

Now I’m up to the heel turns on the Crosshatch Socks. They aren’t going to make it for my daughter-in-law’s birthday which is this Saturday, but likely I won’t be seeing her until we babysit for them while they go to a wedding on the 16th. That gives me an extra week to finish up. Maybe.

So I’ve still got a skein and a half left to spin for the Icelandic Lace Shawl project. As usual I’m running behind on the KAL which started in earnest on Monday. Oh well. What can you do? It’s the process that counts and it’s not a race, is it? I hope to work on the spinning a bit this afternoon. Luckily my sore foot is the left one and not the one I usually treadle with. Tori works ok with only my right foot instead of both. Weaving on the Circus Blanket is out right now however. I press the treadles exactly where it hurts on my foot. Maybe that’s part of how I overused it, not just walking a gazillion miles? But who knows? I’ve had this problem several times since I was a teenager which was a very long time ago now. (And funny thing — the first time happened after walking a gazillion miles too!) There’s obviously a weakness there anyhow. How does one engineer better feet? I only wear sensible shoes with good support. And I do exercises and get massages for them, plus keep my nails trimmed and rough skin removed. (No nail polish though. I don't do nail polish.) My feets are totally spoiled and yet they betray me. How dare they! Ungrateful wretches.

Hi Damselfly!
Sorry to hear about the wounded paw and hope you are feeling better soon.

I wish your kids much luck with their coming sale and purchase. They have far more stamina and better joints for this sort of this than me at my age...