Where Have I Been?

Well, it wasn’t to London to visit the queen. (Sorry. Old nursery rhyme reference.) But I have been busy and poof! Here it is, several days into a new month already. On Saturday instead of working on the new steps and concrete cobblestone entry through our side gate, we ran away for a long walk downtown to run a few errands and do some shopping. And of course to have lunch from the sushi boats!

While we were walking, we came upon a section of the seawall where a fellow has spent two weeks balancing rocks into stacks and arches. (Here’s the article in the local paper that I read when I got home.) This time I had my camera with me: 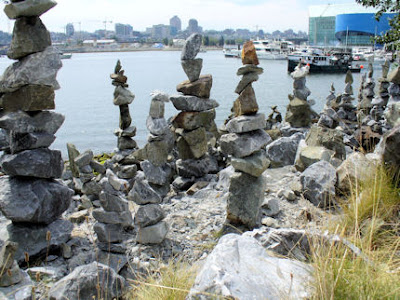 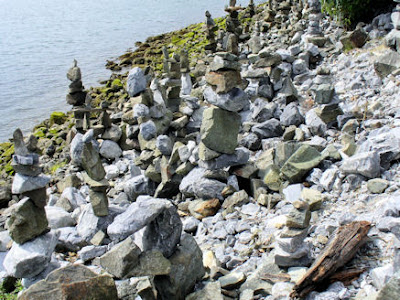 There was lots more and some was much more elaborate. It went on for quite a ways along the shore but I was afraid to get down among the rocks in case I knocked something over. I would feel bad and the builder was right there watching over it all! There’s information online here about the art or meditation of stacking rocks and another one here. The Japanese term for a deliberate pile of rocks like this is an “obos.” I first read about this in one of Robert Genn’s email letters and there’s more info here. In Mongolia they have a more religious purpose as well as marking directions. They call them an “ovoo” (rock heap) which is pretty similar to the Japanese word. But the Mongolians add sticks and prayer flags to the piles which can get really large. Of course here in Vancouver where we’re feverishly building the facilities for the 2010 Olympics and the chosen “mascot” is an inukshuk, that’s what everyone is calling the ones we saw, though in my opinion they have no relationship to a real Inuit inukshuk. (And the controversial Olympic mascot, named Ilaanaq, looks more like a cross between Pac-Man and Gumby! Though it’s supposed to be based on the one that’s been at one end of English Bay beach for over 20 years.) I find it fascinating that it is so much a part of human nature to stack rocks on top of each other in this way. Not just to mark the trail, like the cairns we found in Capitol Reef in Utah, but also just because you can. Some people develop it into an art form, sport, meditation, worship or all of the above. There’s even a stack in our own back yard! T-Man made it with some white quartz rocks but it keeps getting knocked down by squirrels or other critters. He says he’s going to glue it together one of these days but I think that’s kind of cheating. Heh!

Unfortunately on the way home, my left foot started to hurt and by the time I got home it was really sore. Not quite the return of the nasty plantar fasciitis but a little farther forward under my arch. We probably should have taken the bus home but once you’re in the middle of the Cambie Bridge there’s nowhere to go but onward and upward. I taped my foot up yesterday but I wasn’t able to stay off it because we had a Dye Day in the studio with my darling daughter and her friend. I also invited my friend Jo to play too and we had a busy but fun day dyeing skeins and rovings and a pair of Jo’s linen pants which are now a lovely shade of greenish gold instead of boring old white. Of course I get to knit darling daughter’s sock yarn into socks for her. Lucky me! Another pair of socks to add to The Queue. They’ll probably get done fairly soon because I’m going to knit them plain. She did massage my sore foot though so I forgive her for forgetting to pay me for the dyes and yarn. I’ll get it at her birthday party in a couple of weeks. No money, no prezzies! Am I a mean mom or what.

Today I’m doing my best to stay off the foot and it’s feeling quite a bit better. At least I’m not limping quite so much. I’m hoping it’s mending quick because tomorrow I have to go help our other kid clean up their townhouse preparatory to putting it on the market. They’ve put in an offer on a detached house with a real yard for the kids and they have to get as much as possible for their current place to be able to afford the new one. Unfortunately they only have a few days to clean up the mess that has managed to accumulate over several years and with two little kids. They’ve rounded up the family members to help but it’s a big job that none of us really want to get into. I’ve pleaded sore foot today but it’s hard to say no when your baby boy…er, grown son asks for help. Particularly after he damaged his hand and x-rays showed he very nearly broke a bone in it at ninjutsu practice so he’s in worse shape than I am. T’s over there now seeing what tools and equipment are needed and I’ll go with him tomorrow. This isn’t quite how he expected to spend his precious week off though. This isn’t getting the paving project done before the weather gets too crappy either. Timing is everything, eh? Oh well, it’s supposed to rain tonight and tomorrow morning anyway. Oh, funny thing! It’s raining right now.