I heard (but didn’t manage to see) a flock of Canada geese honking their way south today. We are mild enough around here to actually have a resident population but the majority leave for warmer and hopefully drier climes. I love watching them because it reminds me again about the turning of the seasons. Like the colourful leaves, they are a definite sign of changes in the air. And speaking of changes, the rain is slated to give us a bit of a break later today and tomorrow which would be nice. We ended up staying in and having a restful quiet weekend because it was positively snorkeling weather out there and neither T-Man nor I felt like venturing out in it even to go get groceries. Wimps. A little rain didn’t stop the heron which flew by just after the geese did. He wasn’t going south. Our herons don’t migrate. Like us they tough it out through the cold, soggy, dark winter. But unlike us, he doesn't have a nice warm dry house with electric lights and lots of stuff to amuse himself with.

I’ve finally started in again on the Hepburn Cardi. I got a few centimeters worth of sleeves done so far: 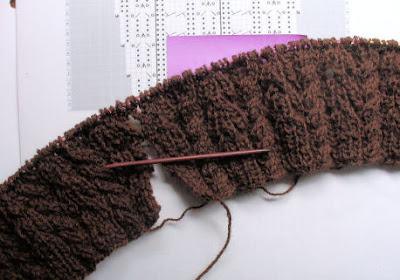 I didn’t wash the kinky frogged yarn, but just wound it back on the cones. If I had washed it, it would have not only taken out the waxing (this was knitting machine yarn) before I want but would have meant skeining all of the yarn, not just the used yarn, which was way too much work. Hopefully the kinks don’t mess with my tension too much. Since I’m not a very even knitter anyway, you probably won’t be able to tell. It will be interesting to see how far I get until I run out of the kinky stuff. I had knitted both sleeves to the decreases at the underarm where the sleeve cap begins. This time around I’m hoping to finish the whole sleeves and still have more left over. We’ll see how that goes. So far the charts I created have been a big help. Purple Post-It at the ready!

At the same time, I’ve been working on both the Earl Grey Socks (heading down the feet) and the Jacoby Gauntlets. The gauntlets, or more accurately fingerless mitts, are coming along fine: 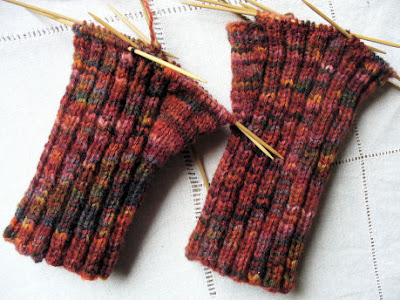 However I’m not sure if there will be enough room in the thumb for another glove underneath. I guess we’ll see how that goes. They fit just right on bare hands. Though the main cuffs are on fewer stitches, I did the thumb gusset and opening as per the pattern but because they’re knitted on smaller needles they are a bit tighter than the original. I also plan to make the part above the thumb opening shorter than the pattern so I can bend my fingers more easily. My hands are very small so I always need to adjust patterns to fit me properly. I love having gloves that really fit and don’t have too-long fingers flopping around. Makes all the fiddling around knitting said fingers worthwhile.

I need to get on to my latest volunteer weavers’ guild job. I promised to do the Membership Booklet this time. Unfortunately I have to start completely from scratch since the last person has a Mac and used software I don’t own. At least I have the majority of the files I need, assuming I can get them to play nicely. Remind me again why I said yes?