Look! Up In The Sky!

What is that thing? That ball of bright light outside? And what happened to all the dripping water? Usually I think I’m quite alright with the rainy dark weather but that all changes when the sun finally comes out. I feel unaccountably energetic. I want to go out and play. Maybe rake leaves (except that makes my neck really sore). OK, I may actually have to vacuum today because I can finally see the dirt I’ve been ignoring for a week. Darn.

Meanwhile I have another FO! The Jacoby Gauntlets were just too quick to knit so I ended up finishing them before the socks that have been on the needles much longer. I still have just over half the yarn left (around 85 g) so they may become part of a pair of socks one day. Or something else. 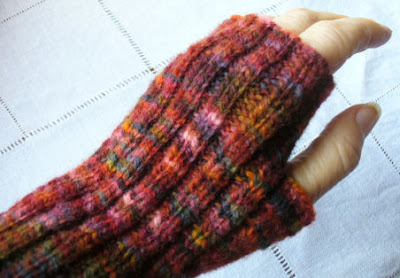 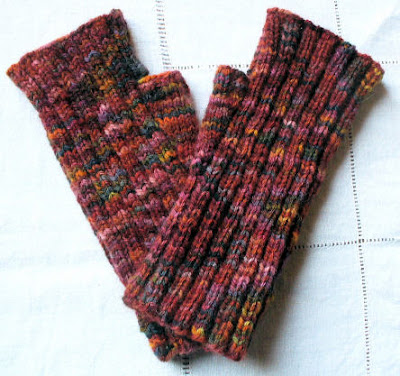 Comments: I modified the pattern a little by only casting on 56 sts instead of 60. Other than that I followed it as written. Finished length is 7” and 5” around the wrist below the thumb gusset with the ribs relaxed and not stretched.

I’m trying to stop myself from starting another project (Black Gloves) because I only have about half the yarn I need for them. Spinning comes first and I want to get going on these before it gets way too dark around here to see what I’m doing. Skinny black yarn and older eyes do not go together at all well. At least I have a couple of good lamps, some stationary near workstations and some that I can drag around, so that I can get light on whatever I need. Otherwise I’d be limited to working only on sunny days! Around here those are few and far between particularly in winter. The days are only light for about 8 hours or less too. Make yarn while the sun shines! Oh yeah. I’m supposed to be vacuuming aren’t I? Pfth!

I’ve got another of the Maiwa lectures to go to tonight. This one is by Karen Selk of Treenway. She is the Silk Queen and knows just about everything there is to know about it. I’ve attended lectures and workshops with Karen before and she always has interesting and thought-provoking things to say. I’ll tell you all about it later. On the other hand, I would have liked to have gone to my former student Kim Werker’s launch party of her new crochet book at Urban Yarns. Oh, well. Can’t do everything. Rumour has it they will be turning people away at the door anyway. It’s not a very big store and crochet is a growing trend. Kim is so happy about that, as well she should be! She is not an insignificant part of the reason why. Good for her!