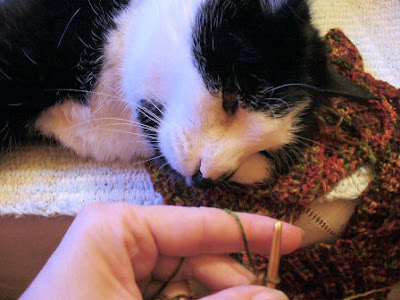 I’ve been plugging away at my Boteh Scarf with the help of my Kitty Assistant, Ms. Julie. (Think she’s trying to learn how to do it herself?) I’ve now joined in the second ball of hand-dyed sock yarn at motif 13. The piece is nearly 1.5 metres long with only 2 motifs to go according to the pattern. But because I started by reducing the size of each motif a little, I think I’ll go to 20 repeats instead of 16. I like my scarves long and skinny. Still haven’t decided if I’ll do the final row of hdc’s around the whole scarf but it might need it to stop the thing curling up into a tube. The end of this ball of yarn is much lighter in tone than the rest of the ball which might look “planned” around the scarf. Or not. I guess I’ll just have to test it. One thing for sure, it’s too easy to frog crochet! Ask me how I know.

Although I’ve been crocheting since I was a child there are a few new wrinkles that I’ve had to get used to. The rows begin with ch 2 and hdc into the first stitch at the base of the chain. When you get to the end of the row, you hdc in the last st but not into the start ch from the row below. This actually looks very nice but is different from how I used to do it. I would skip the first st below the turning chain and the last st would be into the top of the previous row’s turning chain. The disadvantage of this method is that there is a bit of a gap that shows between the turning chain and the st next to it. The new method looks much tighter and smoother. I guess you can teach an old dog new tricks!

I still am not as comfortable with hdc as I’d like. I keep catching the hook in the second loop on the hook before I pull through the last loop. It helps if I grab the stitch from below with my left forefinger and thumb so I have something firm to pull against as I complete the stitch. My dtr stitches are getting much neater and tighter. They were loose at the top at first and still are a little but better than they were. The first part of the stitch is naturally tighter but there is more slack toward the last “yo, pull through 2 loops on hook”. I tend to want to wrap the hook loosely 3 times instead of tight which works better to eliminate the slack.

Even with all the mistakes I’ve made on this scarf, I’m remembering what I like about crochet. Nearly immediate gratification! It’s going quite quickly and I’m getting an amazing amount of fabric compared to the socks that I usually knit out of this yarn. Who says crochet uses more yarn? Not necessarily so.

Speaking of socks, I’ve turned the heels on the Earl Grey Socks and am cruising down the gussets. I opted to keep half of the twisted stitch pattern going down the sides of the foot which slows me down a little. I have to keep track of the rows instead of blindly going around and around. They’re coming along. I’ve gone and lost one of my needles but because I knit on them alternately I can use the spare from the other pair to carry on. I have no idea where these things get to but since they just look like oversized toothpicks (at more than $2 apiece and you can only buy them 5 at a time!) they have a disconcerting tendency to either break or disappear on a regular basis. Later I plan to get out my trusty bamboo skewers and create a substitute. You can buy a couple of dozen skewers for the same price as one actual needle is worth. They just take some time to cut to the right length, point and sand smooth. They aren’t quite as durable as the “real” needles but they work just fine. So tell me why do I bother buying the real thing?

I haven’t gotten re-started on the Hepburn Cardi yet. I’ve put it in Time-Out for making me disappointed (even if it was my own fault). However I need to get back to it because it’s cold enough around here to want to wear a sweater! We keep our house temperature down except first thing in the morning and in the early evening. Even if it wasn’t helping to keep the greenhouse gas emissions down, at the price of natural gas it’s worth it. As Brenda Dayne of the Cast On podcast always says “If you’re cold, put on a sweater. That’s what they’re for.”

Well, I went to the demo with Richard Ashford last evening and it was pretty much as I expected. It was geared toward beginning spinners and weavers so I didn’t learn anything new. He even drafted me into helping! They have a couple of new products that were nice to see: a set of 5 graduated spindles in a holder and stands for the regular Knitter’s Loom and the new wider Knitter’s Loom. My only complaint is that the spindles come all together and you can’t just buy the ones you want. There are finally some really little spindles which they never had before so I feel they need to make these available individually as well. The Knitter’s Loom (apart from the stupid name) is a quite good little 12” folding rigid heddle loom and the new 20” version is even more versatile. You could weave everything from placemats to clothing fabrics on the wider loom which is helpful because I’m sure just weaving scarves gets old really fast. You would have to piece to get a useful width for much else. They also have finer dent reeds available because 7.5 dents per inch is pretty coarse for anything but novelty yarns and blanket weights. These looms don’t have the attachment available for double heddle weaving though — for that you’d have to go with their regular rigid heddle looms, which are similar but don’t fold. If it was me, the loom that I would get would be the 16-shaft table loom plus stand. It’s much more expensive and less portable but you could weave virtually anything on its 24”. I like the overhead beater too. My Woolhouse Carolyn has one as does my big loom. However, as an entry level loom to bring knitters over to the Dark Side, the Knitter’s Loom works very well. There is a surprising amount that can be done on a rigid heddle loom.

Which brings me to the books. It’s not out yet, but Ashford is publishing a book on making clothing on the Knitter’s Loom. They already have one on the rigid heddle loom and a booklet for the Knitter’s Loom. I do think that since not only Ashford but Schacht and Kromski (and others) also have very nice affordable rigid heddle looms available that there should be a more in-depth book. Interweave has “Hands On Rigid Heddle Weaving” and there is a video with Betty Linn Davenport, but unfortunately her wonderful book “Textures and Patterns for the Rigid Heddle Loom” is OOP. For some reason people quickly lose interest in this type of loom and either go on to shaft loom weaving or give up weaving altogether. I myself own a teeny little handmade rigid heddle loom but it was made for weaving wire jewelry, though of course you could weave yarn on it as well. I haven’t used it for, ahem…ages.