For the moment anyway. I was really busy all weekend so didn’t get a chance to even turn on the computer. Highly unusual! The weather was gorgeous, sunny and relatively warm so that may have had something to do with it. In order: I went to the Barber lecture Friday evening, to Spectrum Dye Study Group on Saturday, on a long walk on Sunday and then to another of the Maiwa lectures, this time with Jane Callender, a stitched shibori artist. Today I’m relaxing even though the laundry and vacuuming need doing. They aren’t going anywhere (except increasing in numbers of undies and dust bunnies) so they can wait. Tonight I go to another lecture, not a Maiwa one but at my LYS, with Richard Ashford of Ashford Wheels & Looms. It was my former boss’s idea that I come and she waived the $20 fee for me so even though I’m tired, I’m going anyway. At least the commute is only 3-1/2 blocks. Better than having to buttonhole T-Man into picking me up or begging a ride from someone going my way.

So first off, how was the Elizabeth Barber lecture? It was really thought-provoking, just as I thought it would be. Some of the mummies that Dr. Barber studied in Urumchi, China, were 5,ooo years old and yet were wearing large fringed wraps woven from handspun wool and felted wool caps with finely woven grain baskets to hand. You could see the stitches and the headers where the warp was set up for the warp-weighted loom. You could see the yarn variations attempted to decorate the cloth. One young girl’s wrap had 3 different natural colours of wool. A later mummy of a man (who just looked like he was asleep and not millennia old) had a wool shirt and pants in a handsome deep maroon with contrasting piping and a tubular braided belt. A baby had a cap of blue wool (and possibly cashmere) which was so brightly dyed it could have come out of yesterday’s synthetic dyebath. His wrap was secured with a twisted blue and red wool rope and he had a horn cup and sheep’s teat bottle nearby. Later people still had multicoloured plaid fabrics that would make any Scotsman proud. The effect of these bodies wasn’t at all horrible but absolutely fascinating. Dr. Barber explained much of the prehistory of the area and the conjectures about where these Caucasian people came from and how they ended up settling in one of the driest places on earth. Too much for me to explain here. Read her book. Better yet, read all her books. You’ll probably feel as I do that people haven’t really advanced as people, just our technology has. Are we better off — or not?

On Saturday at Spectrum we had an extended show-and-tell with our last meeting’s felting, mostly scarves. By then it was lunchtime so we had our usual fabulous potluck which included pumpkin soup, veggie stew baked in a small pumpkin, quinoa salad, carrot and daikon radish slaw with pumpkin seeds, and a delicious apple and pecan cake with vanilla ice-cream for dessert. It was definitely a harvest/Halloween meal with orange being the dominant colour! We chatted so long at the dining table and out in the hostess’s weaving studio that we never did get around to actually doing any felting. When I got home I took my felting needle and created some fall leaves on my crochet hook roll that I’d made awhile back. It looks much better now. See? 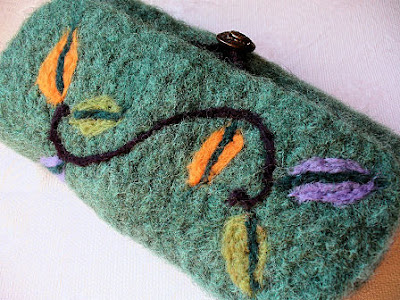 I did have a bad scare though while I was working at the table outside on my top deck. I felt something land on the top of my head. Since I was sitting underneath a planter that has some quickly-deteriorating impatiens, I just thought it was a flower or leaf from that. I grabbed it in my hand and then noticed that it was a wasp! Yikes! Here I was home alone (T was at a woodturning demo) and I almost got stung. Last time that happened I ended up in hospital with anaphylactic shock and I’d hate to repeat the event. Unfortunately my epi-pen is outdated, though probably still good (emphasis on the “probably”). I’d hate to have to use it and find out otherwise. They are so expensive that I was hoping to wait to replace it until late next spring. Not too many wasps around in winter after all. Luckily I had grabbed the thing fairly gently and although I startled, I didn’t squeeze it but let it go. It landed on my shirt front where I leapt up and shook it off over the railing. Whew! Disaster averted. I’m not sure how long I would have had to figure out whether or not to call an ambulance or a taxi if it got me. T was certainly too far away to get home quickly. Last time it took nearly an hour before it got critical but who knows with subsequent stings. I’d rather not find out. Surprisingly, until this happened I’d gone back to being pretty relaxed around wasps. Remains to be seen if I stay that way or if there’s some residual post-traumatic stress again.

The weather yesterday was still pretty nice so we went for one of our usual walks. We finally got our photos taken for our passports. My photo is really awful! But I don’t photograph well at the best of times anyhow. The authorities don’t care as long as it looks like me, right? I’ve given up being vain about my looks. Who is that old lady in the mirror when I still feel young inside? As long as the passport satisfies those idiots who made them mandatory in order to travel outside of Canada. Maybe I won’t even use it. Or maybe when we get our passports we’ll take a quick trip to San Francisco or something. Just to try them out, you know. See if they’re worth all the hassle and expense.

Last evening’s lecture featured Jane Callender’s indigo-dyed nui shibori which is just to “dye” for. I totally love the precise and beautiful geometric designs that she achieves with her stitching. Almost as fascinating was her story about her family and her discovery of her chosen medium. Though she now lives in the UK, Jane was born in Malaysia and spent her childhood on a rubber plantation. Her parents’ families were associated with such far-flung countries as Egypt and India. Old British Empire stuff. Although the lecture wasn’t as thought-provoking as Dr. Barber’s was, it was still wonderful to see several of the pieces shown in her slides up close and personal. My favourite one called “Trellis” is here and another lovely one called “Dandelion” is here. I didn’t bring my wallet with me so I was unable to purchase any of her small introductory kits (pricey) or her indigo-dyed bone beads. Awww…

It’s raining again now so I’m glad we got out in the nice weekend weather. Fortunately I bought a new umbrella so it doesn’t bother me. We’re right at the high colour mark for the autumn leaves though and the rain kind of spoils the enjoyment. You can’t kick them as easily when they’re wet! Here’s what some of them looked like yesterday: 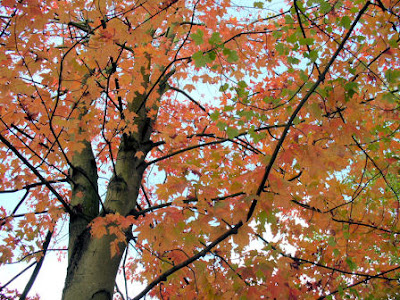 I have no idea what kind of street trees these are but isn’t that pink just glorious? Oh, and I haven’t been on Ravelry since Friday.