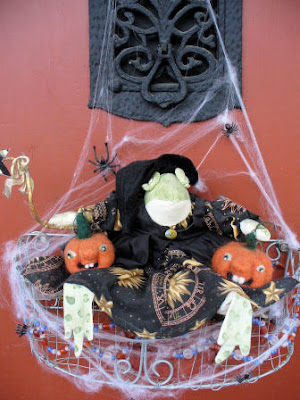 The Toad Witch is welcoming you at the front door into my House of Horrors. She once was a real witch but she had a slight accident whilst trying to turn someone into a toad and it backfired upon herself. Instant karma? Accompanying her are her two pumpkin buddies, Jackie and O’Lantern. Meanwhile the spiders are hard at work all around them. Unfortunately we aren’t quite ready for the evening’s frivolities and frights because we don’t have our pumpkin or our goodies to hand out yet. Running a little behind I’d say.

My hands are a suitably weird shade of orange because I spent the morning mordanting wool and smashing my madder roots with a hammer. There are bits of root everywhere even though I tried to contain the mess. I finally got wise too late and put on my vinyl gloves but not before my nails turned quite a lovely shade of red-orange especially around the cuticles. I first tried to use my mini food processor on the roots but chunks would get stuck on the blades and all it was doing was whizzing them around without affecting the size of the bits. So I started chopping them as fine as possible with the pruning shears and then hammering the pieces on a board. That worked much better. 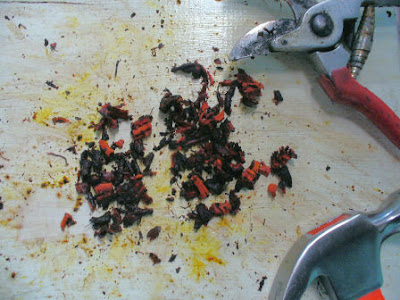 I managed to process about a pound of soaking wet roots (maybe a couple of cups worth) before my patience and my body gave out. I still have at least the same again or maybe even a bit more yet to do. Later. 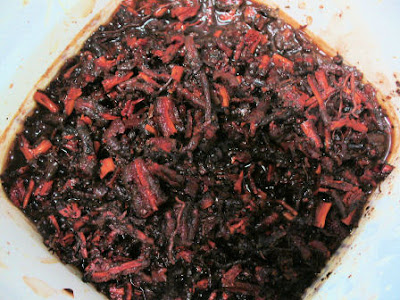 After I pooped out on the chopping and hammering, I added warm water, a generous pinch of soda ash and a couple of crushed calcium supplement tablets to the small bucket. Our water is very soft and madder likes it hard so I was trying to compensate. There is a lot of good colour coming out so I plan to soak it at least overnight before doing anything else. 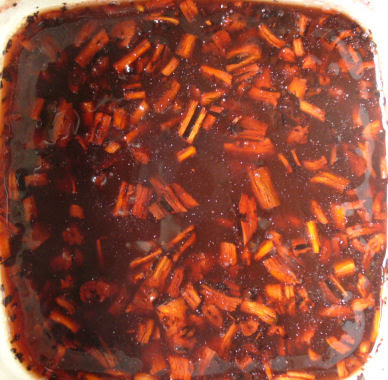 Meanwhile I put half a pound of crossbred wool sliver in alum mordant (20 g) and brought it up to a simmer, left it for an hour or so, and then removed it from the bath into a bucket to cool. I added another 10 g of alum to the pot and repeated the procedure with another half-pound of the same wool. I was only going to do one batch but decided that I’d better do two because I know there will be lots of colour left in the bath after the first batch. If I get orange-pinks I can always overdye some of it for more colours. Yes, we have options! I’d probably have thrown in a 3rd batch to mordant but I ran out of this particular sliver. I could get more, but I’d rather use what I have for now. I have lots more sliver but I think it’s Borderdale, Corriedale and maybe some Perendale. All the “dales.” Heh. The reason I chose the Crossbred is that it’s very clean and not too soft so it doesn’t felt very easily. If I’m going to be messing around stirring and rinsing, I want something that won’t either fall apart or turn into Rasta locks on me. I do actually want to spin this stuff eventually.