Jeepers! I haven’t posted since Wednesday! I have been busier than I thought. For starters, here’s my FO that I finished way back on Thursday but they didn’t dry from their celebratory bath until yesterday. Then I had to corner T-Man to model because the mini-cables don’t show up unless they are worn. I’m not totally happy with this project, possibly because I ran out of yarn so close to the end. No, knitting faster doesn’t work to stretch the yarn to the end of the toe, darn it. I’ve proved it now. I also had to fiddle around fixing too many errors on my part as I was working on these. Not as enjoyable as something that sails along smoothly. Anyway, here they are: 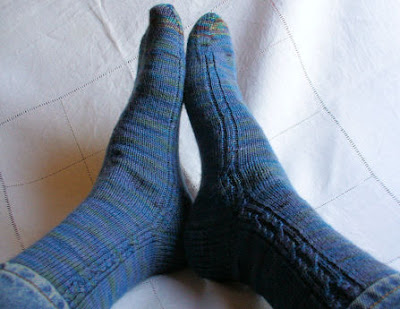 Comments: I followed the pattern nearly as written, though I used smaller needles than called for. T-Man’s feets are smaller than Joe’s! They are still on the large side but fit passably well. As a hint as to how much bigger they are than usual, I ran out of yarn 1” before the end of the toes so had to substitute with a slightly brighter and more variegated yarn. Not too different but definitely obvious. If I was doing these over, I would pay more attention to where the cables divide for the gusset. I would do it in the middle of the first pattern section where there are two cables side-by-side so they could split rather than splitting the central cable and fudging. I didn’t do that neat of a job. As usual even a slightly more complex pattern took longer to knit than the usual 2 weeks for plain socks.

The minute the socks came off the needles I’ve cast on again for a pair of baby socks for my grandson in a vain attempt to use up some of my leftover sock yarns. He needs more socks since the ones he has spend mucho time in the laundry. Can’t believe the Stargazer will be one year old already at the end of December. He’s such a cutie-pie! (Says the doting granny...)

Yesterday, T-Man had a day off and the weather was a glorious and sunny fall day. So we went walkies and I bought some new clothes, staples that will help keep me warm for the next few months. At Mark’s Workwear I got 2 “girly” long-sleeved waffle-knit Henleys (one orange, one purple), 2 heavier ribbed cotton zip-front hoodies (one black, one bright green), one basic black turtleneck T, one pair of drawstring waist sweatpants, and 3 pairs of light socks (black, to wear under my handknit socks). Several other garments didn’t fit me as they were the usual too loose on the top and too tight on the hips. I’ve gained a bit of weight back and the belly is just too much! I’m going to get serious again to get more exercise. My poor elliptical trainer is lonely in the basement. At a different store (Reitman’s) I found a black fleece vest on sale and for a wonder, it fit. There were only 2 of them left in the store and the last one got snatched just as I was trying mine on. Serendipity. So now I have some layers to put on when I feel cold. I washed them all and I’m wearing black and orange — no surprise there given the time of year.

Then last evening I had two adventures. First, after dinner I went to the debut of Maiwa’s new film, In Search of Lost Colour. It was really interesting (as are all of their films) and at an hour and a half, even more information and unforgettable shots of dye plants and exotically dressed people messily preparing dyebaths with their bare hands and pulling out fabulous lengths of gorgeous cloth from improbable vats. They don’t have to convince me that nature gives us wonderful colours! I just wish I was better at applying them myself. I definitely need more practice anyway. I’m inspired now to dump out my pathetic madder plants from their galvanized buckets and see if I can get a few more roots to play with.

Anyway, adventure number two: T-Man met me after the film to drive me home, though actually he had to wait a half-hour because it was longer than I thought. To make up for his waiting we walked the short distance to the HR Macmillan Space Centre observatory which was open on such a clear night. The folks hanging out there were very accommodating and let us look while explaining what we were looking at through their personal telescopes. It might have been only one day past the full moon but the real excitement was a comet, P17 Holmes, that had everyone in a twitter. It’s a periodic comet that apparently has no tail and is currently heading away from us. Yesterday it suddenly increased in size and brightness so that you can see it with the naked eye! Nobody knows why it did that but it does have a history of fluctuating. Not this much though! We got to look at it through the big observatory telescope too and it looks like a big fuzzy ball with a bright centre. You might recall that I like comets a lot after I hooked Hale-Bopp into my headboard rug. Now I’ve seen another one that is so different again. Very exciting! It was quite an evening. Tonight is unfortunately cloudy so we won’t be using the binoculars to see what Holmes is up to now. But if you have a clear sky you can see it yourself. More info here on where to look.

I didn't know about the comet. I have posted in awhile but I've been keeping up with your blog. I liked the socks, Jacoby and Boteh scarf. You've been busy.

I've got the pattern for those Earl Gray Socks in my knitting bag for my next sock project. Coincidence, eh?

Thanks so much for the fibre-filled afternoon. I look forward to seeing you again.