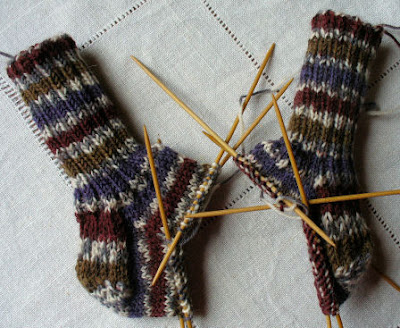 The “mad” part first: my baby socks are way too big for the baby! I don’t know what got into me but a sock on 48 sts is just honking huge for a one-year-old’s foot. I was seduced by the narrow ribbing into thinking they were smaller than they really are. Now that I’m past the gussets though I’m thinking if I continue they will be toddler socks instead. Unless I run out of yarn too soon, in which case I’ll frog them and start again on a more reasonable number of stitches, say 36. Stargazer needs more than one pair of socks anyway and he will grow into them eventually no matter what size they are. Then I’ll start on another pair that hopefully will fit him now rather than a year from now. At least little socks go quickly!

Next the “madder” part of today’s post. Not "more mad" but the dye plant, Rubia tinctorum. I got my original roots years ago from a friend since it doesn’t seem to start very easily by seed. As I mentioned in my last post, I decided that it was time to harvest them again after several years of ignoring them in their galvanized buckets. In case you were wondering, I never planted them in the garden because these things can get away from you, like mint. And they are really ugly and scratchy and sprawly plants. Not decorative or even scented, which at least mint is. In addition, I can get quite a nasty rash if I brush against madder with exposed tender skin. So they reside in big buckets with a wire cage over each to prevent them from drooping all over the ground (where they will root if I’m not careful). This is what one bucketful looked like after removing the cage and trimming all the dead branches off: 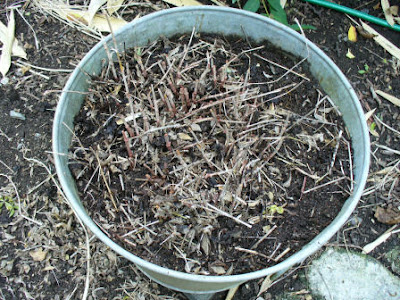 Then we tipped it out onto a tarp: 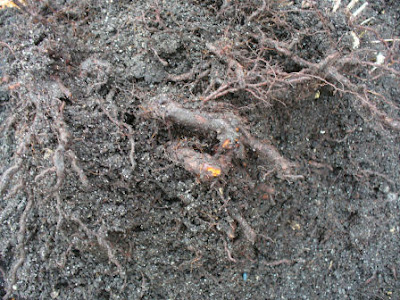 Right away there were some telltale signs of orange and some surprisingly big roots showing. T-Man helped me break up the root balls and we set aside some individual plantlets to put back in later: 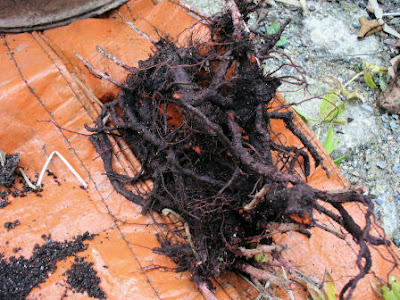 The rest of the roots went into a bucket to be soaked and washed. The outer brown area scrapes off with a fingernail to show the beautiful deep orange beneath but it’s tedious in the extreme to do that to each root piece. They snap into smaller pieces quite easily while they are still fresh so now is the time to clean and grind them up rather than wait until they are hard. I haven’t finished that part yet though. Here are some that have the dirt washed off but not scrubbed really well or soaked yet: 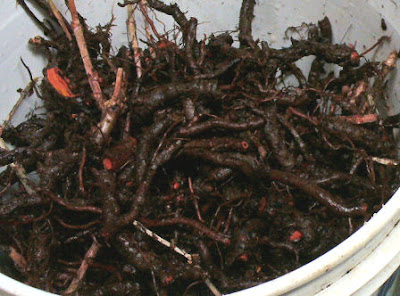 And these ones are almost ready to be ground up. See the bright colour the residual water is already showing? 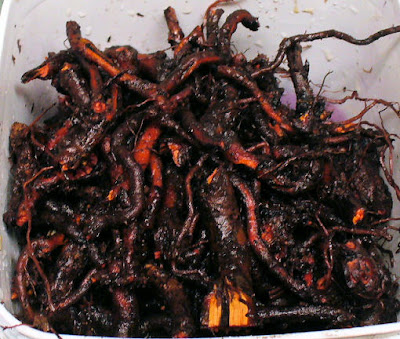 I’m hoping to get some wool dyed with this very soon before it all goes mouldy or something. I’m not sure how much I actually have but I thought it was quite a useful amount from my two buckets. Guess it thrives on neglect! With some research I found some very helpful information here and here on growing and harvesting madder plus a delightful story from the prologue to Brian Murphy’s book “The Root of Wild Madder.” For more botanical dyeing information, I just discovered that the Turkey Red Journal that I used to get by subscription has a new online (and free!) version. Only two issues there so far but more will come. Please respect their copyrights on text and images. Enjoy.