I finished binding off the Icelandic Lace Shawl yesterday, gave it a nice warm soapy bath and spent about 2 hours pinning it out to my satisfaction. As usual it took a patchwork of foam insulation pieces to fit it on but I got it out to 66 inches wide and 29 inches long at the point. Which really wasn’t a point because the bottom edge wanted to be a smooth curve instead of a triangle. Works for me! I was super-annoyed though because all this time I thought I was knitting with my 3.75 mm Addi Lace circular but I was actually using the 3.5 mm. They had been swapped when I last put them in my storage binder and — guess what? The size that’s printed on the cord wears off! And quite quickly too. That’s how I found out my mistake when I measured with my needle gauge. OK, you’re waiting for the stats. Here they are. 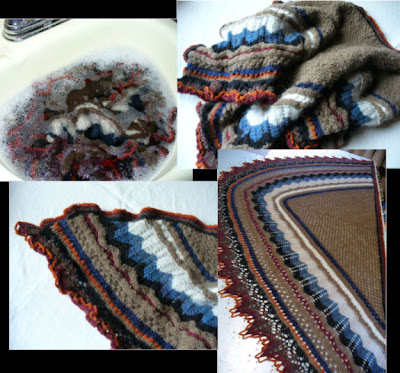 As full out as I can get it: 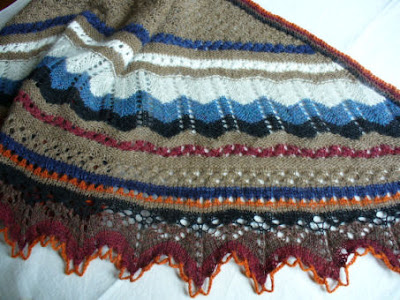 Comments: This was a harder knit for me than it looked! I was unable to follow most of the charts which were non-standard and couldn’t re-chart to my own satisfaction. I had to copy the pattern and re-jig it to create a check-list version (which was helpful for a few members of the KAL too so it was worth it). Then I had to figure out where to put my colours in the sequence. Not sure I’m totally pleased with that but it’s done now. Reminds me of wood and water so it’s not as bad as I thought it might be.

I started with a temporary crocheted cast-on which worked very well. I also used stitch markers between every 20 stitches at least for the first while. Each new section was a new challenge to get set up correctly. That was a lot of stitches on the needle at the same time! Hard to count without the stitch markers’ help. At least then I only needed to count between each marker. I can count to 20 ok. 339 is a lot harder!

I used a Russian join to attach the next colour without having a lot of ends to deal with. It left the first few stitches a bit lumpy but it’s pretty invisible. I found the best method was to attach the new yarn first and leaving about a cm between the last st on the needle and the join. Then I tinked back about 6 stitches and completed the join including some spit-rubbing to seal the deal. The extra space left is for the shrinkage that happens and it mostly lined up correctly when the stitches were knit back to the edge.

I needed to pay attention to what was happening at all times. Knowing what stitches needed to be knit over what really helped to avoid mistakes. I soon gave up trying to do anything else while knitting on this. It’s a lot of stitches to take out if you make a mistake! I did have to drop down and repair a few times especially in the centre triangle area. I can’t tell if there’s any boo-boos that got away. Luckily the slightly lumpy and uneven yarn hides all.

I used a small 2.5 mm crochet hook for the loopy bind-off and only crocheted 6 chains instead of the 10 that the pattern said. I didn’t want it too loopy and I’m glad I did it that way. The difficult issue is that when the top edge is picked up and knitted, the crochet doesn’t extend to the ends. I fudge that by unpicking the beginning crochet loop (which looked wrong anyway) and reattaching it to the top corner. Then I used the tail that I’d left (instead of a Russian join) when I joined the orange at the top and crocheted a matching loop on that side. It worked well and links the orange all around the shawl.

After washing and pinning, the bottom edge took on a gentle curve while the centre section remained a triangle. It’s what I would consider a medium-sized warm shawl, not too lacy and not too huge.

I’ve also finished the DDD Socks but they need to dry so I can take a photo. Posting two FOs in one day would just be too much anyway! I have naked sock needles so next I’m casting on for some more T-Man socks. He’s home today with a cold (has to be pretty bad if he stays home from work!) so I’m feeling sorry for him. I have the denim-ish dyed Sisu from the same dye day as when Darling Daughter dyed the wool for her socks. I thought I’d use the Yarn Harlot’s Earl Grey Socks pattern. It’s mostly plain with just a little cable action on the sides. Notice how I’m going for slightly more challenging patterns than my Standard Plain Socks lately? Except for the DDD Socks because the yarn is doing all the work and anything fancy would just get lost. If the Earl Grey pattern turns out to need too much attention, I’ll just start some little socks for my grandkids and use up some of the leftovers that are kicking around. Gotta have a mindless pattern for those times when my brain is occupied but my hands are not.

Louisa, that is just gorgeous! I didn't really "get" the white stripe while you were working on the shawl but now that it's blocked I love it. It really pops out at you -- almost like the bits between the two black stripes are another layer on top of the brown & red shawl underneath. Very neat.