I forgot to mention yesterday that I presented my daughter-in-law with her somewhat belated birthday Crosshatch Socks. (Only a month!) She loved the pattern on them and the colours. Whew! Not that I didn’t think they would be perfect but it’s nice to have your gift approved by the recipient. On that note, next we have my daughter’s socks. These weren’t supposed to be for her birthday because I had another pair in mind for that. However, after she dyed the yarn and asked me to knit them for her I put the original pair I was planning on the back burner for a short while. I’ll get to them eventually. They’re in The Queue. Meanwhile here’s the stats on the finished DDD Socks. 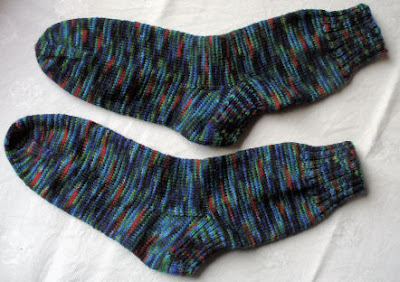 Comments: Damselfly’s Standard Sock Pattern on 68 sts. 6” to heel flap, 7-3/4” to toe dec, with dog ear reduction. I really like how this yarn’s deep colours worked out. The red blips stacked in a pool of dark greens and blues. It reminds me of dark red fish swimming in a pond.

Next I’ve wound the balls and cast on for the Earl Grey Socks for T-Man. He still doesn’t have a dozen pairs of hand-knit socks, but I’m working on rectifying that. Haven’t gotten much past the ribbing yet though. Guess with him home from work with a bad cold, I felt sorry for him. Yesterday he stayed in bed all day. Today he’s working from home sitting in his comfy leather chair in front of his computer with his tissue box close to hand. He so rarely gets sick. Usually he just passes it straight on to me thereby avoiding having it himself. This time I got better and he got worse. Poor baby!

Speaking of babies, we had a lovely dinner out with Nana (T’s mom), our son, DIL and grandkids on Tuesday evening. It was The Ninja’s idea to treat his dad to a belated birthday dinner (only a week late) and luckily Nana & I got to get in on the action. We went to our favourite Thai restaurant but it is so sad! They are situated a mere 6 feet from The Hole where the underground transit system is being built and there were only 3 tables full in a place that usually has lineups out the door every evening. It’s been this way for nearly a year and so many businesses have folded along this stretch that it’s like a ghost town. That along with the construction/destruction makes it look like a street in Kandahar or Bagdad instead of Vancouver. Everyone says the governments (city and provincial) should be doing something more than advertising to help these people but don’t hold your breath. It’s not like they’re going to be inundated with customers when the line is finished because there is no nearby station! Meanwhile we do our little bit for the neighbourhood (we live 4 blocks from the restaurant) but we can’t support them all by ourselves. Did I mention that I’ve been living in this area almost my whole life? 50 years and counting.

The funny part was Nana just couldn’t help teasing the cute little Thai waiter with how we were all related. Four generations of the same family seemed hard for the poor guy to wrap his mind around. Especially since I was the one caring for the baby so he wouldn’t believe I was the grandmother, not the mom. Hee-hee! Little Stargazer was really well-behaved and ate tons of tofu, noodles, bean sprouts, toast with peanut sauce, rice and meat bits. Not bad for only 2 teeth! His sister, on the other hand, spent half the time under the table with her doll. She had some juice but didn’t eat much more than a few bits of mushrooms and red pepper, a couple of shrimp and a bite of rice. At least she wasn’t running around getting into trouble! We all had a lovely dinner and glass of wine and wobbled off home well satisfied. Too bad T-Man wasn’t feeling better though. He did play a bit with the kids but didn’t want to pass on any bugs. Next family do is Sunday’s Thanksgiving Dinner with the thundering hordes. Here! Yeeps! This coming Sunday!