I had a busy weekend again so didn’t have time to post until now. I should be working on my guild’s membership booklet but I have amazing powers of procrastination. Deadline is looming later this week though so I’d better not push my luck.

First off, I’d like to thank everyone for the lovely birthday wishes. I did actually get to go out, first to my favourite tea shop, Steeps, and then to a Greek dinner. And today I’m going to lunch with Darling Daughter. So the birthday goodness just keeps on going!

Backtracking to Saturday, I spent some time (with T-Man’s help) chopping and smashing up the rest of the madder roots. I didn’t have quite as much as I had thought, maybe another pound of fresh wet chips. I couldn’t just put them in the freezer so I quickly alum-mordanted a pound of Borderdale sliver (I ran out of the Crossbred) and put about a third of it into four quick extractions from the new batch of madder. I wanted a larger proportion of madder to wool than the last batch. This time I added about a teaspoon of soda ash just to see what effect that had. The bath turned quite purple, like Bordeaux wine though I’m not sure that really transferred over to the wool. The reason I don’t know yet is because the wool is still in the bath! I’ve been heating it up daily, giving it a stir, and then letting it cool. I’m sure my impatience will get the better of me later on today however. This is one of the reasons why I’m not a particularly successful plant dyer. I can’t wait long enough to see what colour I’m getting! One thing I can tell is that the Borderdale is somewhat more matted already than the Crossbred, even though it’s not that much softer to the touch. Hopefully I’ll still be able to tease it out enough to spin it later. I’m now totally tempted to get the frozen marigolds out of the freezer as the madder root goes into it. I have 2/3 of a pound of mordanted wool still demanding to be dyed. Remind me how I need to do that booklet first, will ya?

What’s next? Oh yeah. Yesterday we went out to the Ninja’s house and borrowed the grandkids for the day. Packing for the big move to their new house today was a lot easier without 2 little demanding persons underfoot. We had a great time with them and took them to the Bloedel Conservatory which is not far from our house. The weather was sunny and not cold at all so we spent some time on the plaza outside watching the new fountain with the spouts of water that suddenly rise up and then subside. Even 10-month-old Stargazer was fascinated. Inside the big koi were a hit with 3-year-old Kiki (apparently at least 6 of them are named Nemo — who knew?) as well as the parrots that talk (“Hello, Charlie!” and “How’re ya doin’?”) She especially liked the relatively little one named Rosie who sneezes (“Ah-choo!”) and meows like a cat. Other brightly coloured birds flew around us or walked across the path. Much fun. Then we went home and played for the rest of the afternoon and finally got them back to their parents at 7pm. Kiki was asleep already in the car and didn’t wake up as she was tucked in her own bed but Stargazer woke up as we arrived though he went right back to sleep without much fuss. T and I were both ready for bed ourselves by then! I like that you can give grandkids back when you’re tired.

I forgot to mention the Baby Socks. Pair #2 (on 40 stitches) fit Stargazer perfectly, which of course means that they will fit for maybe a month max. Pair #1 (on 48 stitches) are still very loose on him. So now I’m going to start Pair #3 with 44 stitches. Third time’s the charm!

Oh, you’re wondering about the title of this post? Well, while the grandkids were here we shut the basement door so that the crawling Stargazer wouldn’t take a tumble. Julie doesn’t much like kids and had already headed for the safety of her own bed downstairs but her mom, Ms. Polly wanted to get in on some of the action upstairs. Kiki even got to brush her which she loves. But apparently the old lady-cat forgot to mention that she needed to use the catbox and couldn’t get downstairs so she peed on my beading magazines on the floor by my bed! Over $25 worth of magazines. That I don’t want to have to go buy new copies of. Anybody got a way to get the cat-pee smell out of paper? One that doesn’t involve anything with perfume? I can live with the wrinkled pages.

OK, membership booklet. Right. But I’m going out to lunch first. And wait, you gotta see the beautiful disocactus flower that came out this morning: 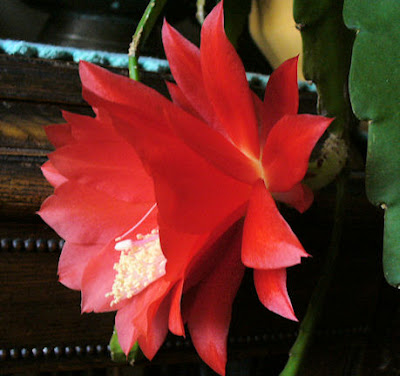 hi... sorry to hear about your magazines... i had a friend who raised cats, and when her TOM cat sprayed she used vinegar... maybe wiping the pages down with vinegar might help..just a thought... sheila

Baking soda? I use it in the litterbox sometimes.

You could always photocopy/scan the pages and chuck the magazines.

We're smart enough to have 2 litterboxes - one upstairs and one downstairs. Just in case the cats need to be separated or locked in one area of the house.

Bought a product at the pet store called "OUT". It's for pet odors & leftovers. I use it to disinfect the cat box & clean up "oopsies" on the carpet. Removes the odor very nicely without adding anything that makes you sneeze, wheeze or sniffle.