Well, yesterday’s lunch was an adventure for sure. The restaurant that Darling Daughter picked is right at the very edge of the hole where the Canada Line rapid transit so far doesn’t exist. See? 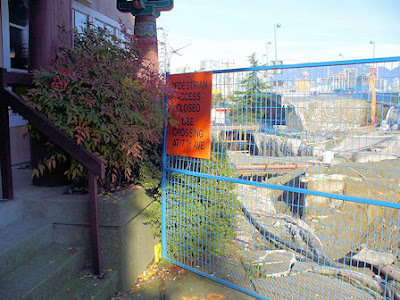 To the left are the steps into the Toyo Restaurant and to the right is a huge drop into space. The remains of the sidewalk ends right there and the whole block behind is fenced all the way along. Nobody walks down there if they aren’t going to eat sushi! How do these poor people make a living when they are trying to run a business right next to this mess? How does their building continue to be suspended in space? Are we very tired of this whole HOLE thing yet?

Lunch was yummy anyway and the company was of course great. I was kind of not in the mood for sushi (I know, too weird) so I had miso soup and prawn and sweet potato tempura instead. I now feel completely spoiled for this year’s birthday! Moving right along…

As far as the second batch of madder went, the first lot of sliver was in the bath for 3 days total and it’s even more orange and lighter in value than my first batch. I think I extracted more of the yellow dye than the red with my quick extraction method. I bet there’s a lot more dye remaining in the roots which are now in the freezer. I put the rest of the half-pound of mordanted Borderdale in the remaining dye after removing the first wool and it’s a much more rosy-pink. I only left it in for an hour or so on the heat and it’s not as matted as the stuff that was in the bath for days. All in all, I got some interesting colours and they are all slightly different! No wonder industry doesn’t show much interest in plant dyes. They are incredibly unpredictable. 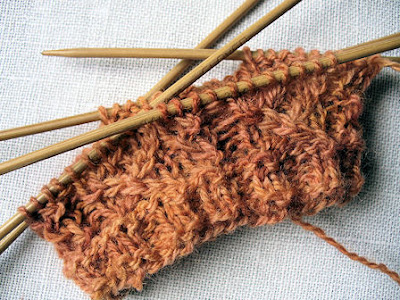 Here’s the OXO Cuffs that I’ve been working on in fine cashmerino 2-ply wool left over from my Swallowtail Shawl. Can you see the X’s? Haven’t gotten to the O’s yet. It was dyed with acid dyes in my Bryce Canyon colourway but it looks surprisingly like some of my madder experiments! Maybe a bit more dusty-peachy. The yarn is somewhat finer than the fingering the pattern calls for and I’m using 2 mm needles instead of 2.5 mm but they will fit me just fine. Perhaps the twisted stitch pattern doesn’t show up as well as the original. But it’s very soft and warm so that’s good enough for me. I would have maybe doubled the yarn but I don’t think I have enough. But then I probably have more than I think since this stuff just goes on for miles! Out of one 225 g skein, so far I’ve made 2 shawls and a scarf. The shawls are admittedly on the small side and the scarf is skinny (though very long) but I’m definitely getting a lot of knitting bang for my buck. My LYS has many skeins of this in natural undyed and a few that were dyed (and slightly felted) by the Handmaiden by special order. And I have one more undyed skein in my stash. 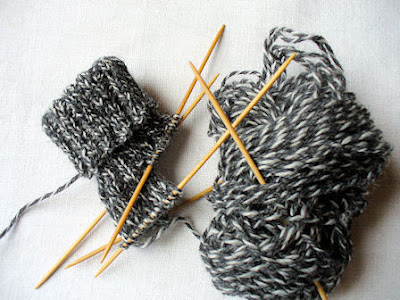 And here’s the beginning of the third installment in my Baby Socks saga. I figured if 40 stitches is just right and 48 stitches is too big, then 44 stitches should give a little wiggle room but not be too big to wear now. These are so fast and easy that I can afford to keep experimenting and using up a bunch of sock yarn leftovers at the same time. Stargazer (and his mom) are enjoying my efforts anyhow.

I want to thank everyone with suggestions on how to de-pee my magazines. So far nothing I’ve tried is working and wet cures are out because it just makes the pages wrinkle and stick together even more. The catbox odour seems to be getting worse instead of better. I’m now debating on how badly I want the worst-hit magazine and whether I can get away with trying to keep the two that are not so bad. The one that was on top has got to go but I don’t know if I’ll replace it yet or not. The jury is still out.

So I worked on it all day today and I just finished the guild’s membership booklet with some time to spare. I’m already getting questions on the contents but that’s just too bad. I just work with the information that was handed to me. It’s hard enough to proofread your own work without having to double-check every address and phone number as well. If I’ve introduced a new error myself then that’s another story.

I am just catching up on your blog after being away for a dear aunt's funeral.

....back to crawling around under my loom setting things up again...