So here’s the results of my walnut dye experiment. Sorry the colour isn’t quite as accurate as I’d like. The light today isn’t cooperating. There’s a dim sun up there behind high cloud and the light is too yellow with too many shadows to take good photos. It’s nice though if somewhat cool. Better than when we went walking yesterday in the pouring rain anyhow!

Below on the left is the first batch of brown, not too intense but I only left it in the pot for an hour on heat. However the next colour to the right of it is the same wool with an iron afterbath. It went darker and cooler though it's hard to see in the photo. Next is the exhaust colour, a warm peachy beige, and lastly the exhaust with iron afterbath which is a cooler tan. The wool I left in the pot overnight matches the exhaust exactly but a marigold yellow that I threw in later didn’t change much at all. 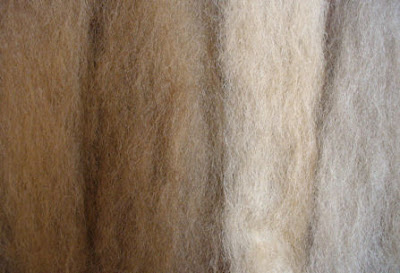 While dyeing the lighter colour, I also tried overdyeing some madder exhaust (below left), plus some marigold yellow exhaust (middle) and some lighter marigold exhaust (right). I didn’t like these colours much until they dried so I only have a little bit of them. 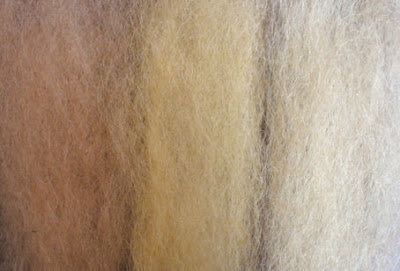 So now I have a heap of wool. Four pounds in total, portions of which are somewhat matted up from all the handling, and I need to make something with all the pretty colours. I’m thinking a Backyard Sweater of some sort since all the dyes came from my yard and I bought all the wool roving from Birkeland Bros Wool which is only 3 blocks from my house. It’s hard to start spinning until I figure out what I want to make. I think I would like a button-front vest but there’s probably enough wool for several projects here. I know — sample! Well, I will. Eventually. There are other things ahead in the queue.

BTW have I mentioned that we cracked the walnuts and most of them, although very soggy, were still quite edible after a drying out and toasting in a low oven. They’re kind of an odd dark colour but they taste ok. We had some in our pancakes this morning which also included blueberries and blackberries that I had frozen from our garden. Yum.

I've been following this dye adventure with great interest since I have a big bag of black walnuts in the garage. It never occurred to me that you could eat the nuts after soaking. I didn't want to hull them but I hate the waste. (Of course, I hate shelling black walnuts, too.)

So you soaked them for several days, took out the pulp, and then added the yarn? And heated the yarn for only an hour? That sounds very do-able.

Cynthia, I took the hulls off the nuts quite early in the process (after they had thawed and only been soaking for maybe one day) but didn't get around to cracking them for several days after that. They were still edible but I wouldn't say they were of best quality! Of course they were in the freezer for about 4 years also which probably didn't help. ;)