Gee, I was hunting all over for the post where I talked about the second pair of Baby Socks and obviously nobody is paying attention because I never did a proper write-up on them when they were done. So here it is rather belatedly: 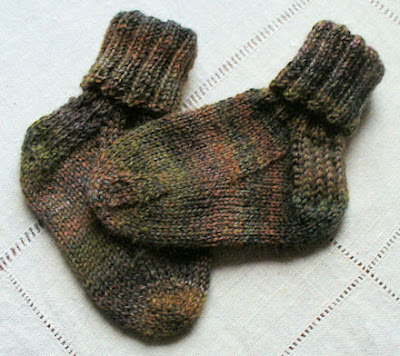 Comments: If at first you don’t succeed, try again! These are much smaller and fit him right now. Barely. They’re 4-1/4” long. The third pair fit better but they could still be a smidge longer. I plan to make a fourth pair eventually that hopefully will be just right. I will take into consideration that the little guy just keeps on growing.

Meanwhile I started a pair of plain socks for T-Man. Yes, he keeps getting socks because he doesn’t have a dozen pairs yet. It was interesting when we were at The Ninja’s new house on Tuesday, everyone except KiKi and her dad were wearing my socks. Even Nana (we brought her with us) was wearing one of her two pairs. Obviously they are a hit. I wish I could knit faster before some of the first pairs start wearing out! They don’t come with a darning and repair service. I’m not that dedicated. So what am I using you might ask? A new (to me anyway) yarn from my LYS marketed by SR Kertzer called On Your Toes. It’s made in Turkey with 75% superwash wool, 25% nylon and a smidge of aloe vera at 390 yds/360 m per 100 g ball. I got Brown Heather and another ball of Cream for dyeing. Don’t ask me if the aloe actually does anything useful or not. It’s supposed to be nice on the hands while knitting. Hope it doesn’t interfere with the dye but I’m pretty sure it just washes right out. We’ll find out eventually.

I also decided that the walnut dye had enough “maturing” after 3 days or so and decided to use it today. I did a whole pound of wool leaving the last 1/4 lb still in the dyepot to rest overnight. I got 4 shades of browns/tans so far plus I overdyed a bit of the madder and marigold (some lighter colours) to see what happened. I wasn’t sure I really liked the results so I didn’t overdye any more of it. The plain walnut is a warm brown and it went darker and cooler in an iron afterbath. The other two colours are lighter tan from the exhaust bath with a cooler shade from the iron afterbath. I’ll see how dark the last wool becomes that’s still in the pot but I suspect there isn’t too much strength left in the dye. The remains of the hulls after extracting the dye equaled about 4 cups of goo that went into the compost. I may have been able to get a bit more colour out of them but I was too tired to care. Photos coming when the wool dries.