OK, I’ve been forgetting to give you the final specs on the third pair (just right!), which I’m gifting to him when we go over to their new house later this afternoon. 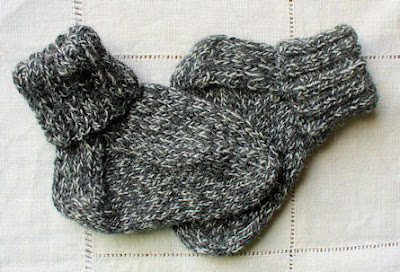 Comments: If at first you don’t succeed, try YET again! These are smaller than the first pair and slightly larger than the second. They should fit him right now and hopefully after his first birthday and into the New Year. Unless he puts on a growth spurt! They’re only 4.5” long which is only a smidge bigger than the last pair but they’re also a bit wider which should give a bit more wiggle room. Next time I’d do them on the same number of stitches but go to 3.25” or even further before starting the toe decreases. Do you think if I just keep knitting baby socks, I’ll get them truly right eventually? No pair is wasted anyway because they’ll all fit somebody at some time as they grow!

Stargazer’s big sister KiKi (like the new spelling of her nickname? just made it up) could use another pair too. She’s very likely grown out of the last ones from a year ago because she’s getting quite tall these days. Maybe I can measure her foot today. I should be able to get a pair for her out of one ball of sock yarn. And I need a plain pair on the needles again anyway. Small ones are fun because they’re finished quickly.

Also I finished one of my OXO wristwarmers last evening: 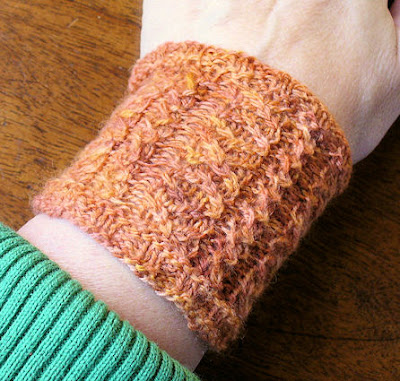 It’s a lovely little thing and fits my skinny wrist perfectly but it didn’t use up as much of my never-ending cashmerino as I had hoped. The yarn and needles I used are smaller than Nancy Bush’s original pattern (Wedding Cuffs, Piecework, May/June 2006) so these are only 2.5” long instead of 3.75”. I could have repeated part of the pattern to make them longer but I like them this way. Though if I was thinking, I really should have put beads in the middle of the O’s. On to number two. I now know why I usually knit these pair-type things alternately — it’s a PITA starting all over again!

If, like me, you get totally caught up in knitting fingerless mitts, wristwarmers, cuffs, fingerless gloves and muffatees, there are lots of free patterns on the web. A bunch of links appear on the Fingerless Mitts For Fall knitalong blog sidebar that you could peruse. They are listed as to whether they’re free or not which is a nice feature. There’s lots of inspirational photos on there too, plus a link to a Flickr group with more.

OK so I was wrong when I said that yesterday’s winds didn’t cause problems. Apparently it was even windier in some other areas than it was here and there were trees and branches down plus power outages, some of which are still out this morning. Also the BC ferries were docked for quite awhile due to high winds and waves which made it hard for a lot of folks traveling home on the holiday Monday. It can get pretty hairy out there in Georgia Strait! Back in my sailing days we had some wild crossings on our little boat. Once we even had to turn back because the waves were higher than our masthead! Or at least they looked that way from our perspective from a heaving little cockpit. Not fun. And it was much worse out there yesterday. If the ferries don’t sail, not much else does either. We got away with only a little debris on the top deck: 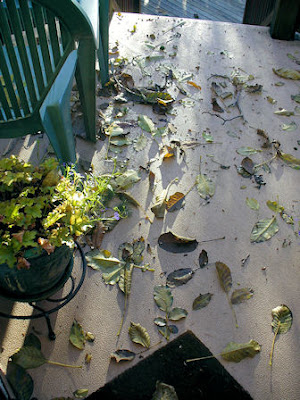 Guess I’d better sweep it off before it starts raining again, eh?