The first “windy” of the title is the weather. It’s gusting up to 90 kilometres an hour out there and is beginning to remind me of some of the stormy weather we had last winter. At least we aren’t losing any trees around town like we did then. Only lots of leaves that hadn’t fallen off yet. My bamboo keeps knocking on the kitchen window and making me jump. I think it wants to come in out of the inclement weather! It did stop raining and is brightening up but I’m sure that’s just between systems.

The second “windy” has a long “i” because I’m winding my newly madder-tinted moorit handspun yarn into cakes. Note that I rather naturally used to call the yarn packets that came off my ball-winder “balls” but some of my spinning students refer to that shape as a “cake” and I kind of like it. Before I starting winding I took a photo for you: 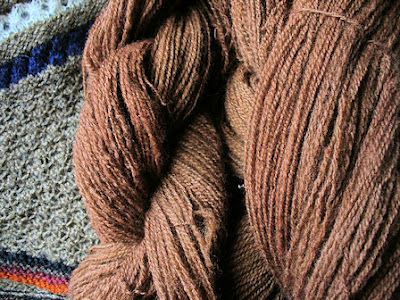 I put my Icelandic Lace Shawl underneath so you can see what the yarn used to look like before it got its madder blush. I think the new colour is really pretty. I’m very fond of dyeing over natural colours to see what interesting tones I can get. In the photo below, the bit of wool on the bottom is the actual colour of the madder bath that the moorit wool was dyed in: 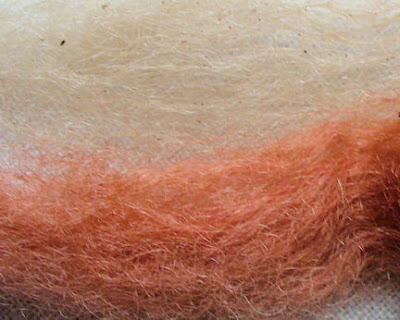 I put a wee bit of white wool in just to see what I was getting. And the wisp on the top is the leftover colour from that bath with a smidge (1 g) of iron mordant added. You can still see some of the madder bits in it that escaped my seive. Of course I couldn’t throw out the almost-spent bath! I managed to dye another 1/4 lb of wool (mordant: alum & tartaric acid) that warm beige and if I don’t need so much of it, I’ll use it to overdye later. Exhaust colours are fun and make a nice contrast with brighter shades plus I love subtle layered colours that you can get with overdyeing. And that’s the last of my home-grown madder root for this harvest! The spent chips went into the compost. Now I have a lot of dyed wool but I need more colours. Marigolds and walnut hulls are next. I’ve had them both in the freezer for ages so it will be nice to use them up. I seem to collect but not make use of natural dye materials for some reason. I’m trying to turn over a new leaf. Heh.

I had a good time at my Ravelry group’s meet-up yesterday afternoon at the local coffee shop The Grind. This one has been around so long that my kids used to hang out there as teenagers. There is lots of room to set up and we could even bring spinning wheels if we wanted. I don’t know if we’ll keep meeting here or try some different venues for awhile until we discover the perfect one. Though for me The Grind is ideal: walking distance from my house and halfway between my two LYS’s. What could be better?

There were 7 Ravelers again this time — though Norma couldn’t make it we gained Beth, another of my former spinning students, who heard about it from Erin. I was first on the scene and while I was waiting I saw this sign on the side of the Internet kiosk that completely cracked me up: 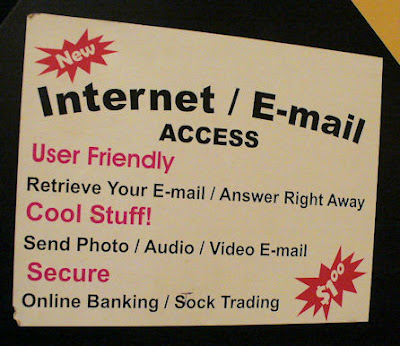 Sock Trading! Yes of course. I knew folks traded socks on the Internet. I don’t know why someone wrote in a “t” making it “stocks”. What’s that all about?


While at the meet-up, I started working on my decoration for the guild’s Christmas Exchange for the December meeting. I decided to go for the Wooly Pears that were on the cover of last year’s Interweave Knits Holiday issue. The pattern is by Nicky Epstein and I used the same handspun yarn that I was making the fulled leaves and acorns out of before. At least I know it fulls well. I managed to get one Wooly Pear done and started another but wasn’t happy with it so I frogged it and started again when I got home. I finished it this morning but haven’t fulled either of them yet: 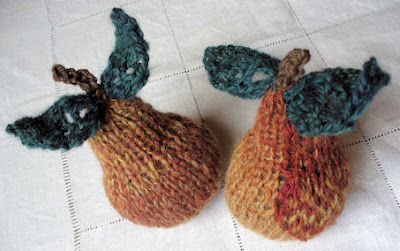 They’re kind of cute the way they are actually. I’m currently knitting another pear from some really ancient fat singles handspun. It’s not pleasant to knit with, being sticky and dense, but I’m hoping the fulling will improve the texture plus wash out the 30+ years of dust. If I like the results, I have enough of that yarn for 2 more. I figure you need either one single or three, not two, for a complete bowl full. They’re pretty quick to make anyway. I’m using one size smaller needles than Nicky Epstein’s pattern (from Interweave Knits Holiday 2006) because my handspun looks too thready and doesn’t full up as much as the Lamb’s Pride Worsted. They’ll be a bit smaller but no matter. I’m also stuffing with coarse grey wool instead of polyester fiberfill. The colour doesn’t show so much and it fulls somewhat along with the outer knitting instead of bearding through it.

Of course after we left The Grind most of us walked up to Three Bags Full. It’s a teensy shop and it was totally crowded when we got there. What does one do when one needs a wool fix on a holiday? Hit the only store that’s open of course! There were 3 or 4 staff and at least 15 customers crammed in. Because it was Remembrance Day a lot of stores along Main Street were closed including the other wool shop, Birkeland Bros. I decided that since I was there I would stop resisting the sweet siren call of the Louet Gems super fine merino fingering wool and bought 2 skeins in white so I can dye them. 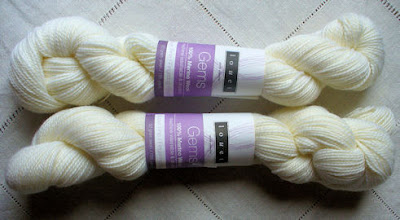 I think I will make another pair of gloves but not until after I make the black handspun ones. I certainly don’t want to make socks with this soft stuff. They would last about one trip to the magazine shop before they wore a hole. I need superwash wool with a hefty nylon content to survive in my boots. Although I’m not really that hard on my socks, I walk a whole lot more than the average person. And I wear handknit socks every day.