Yup, I’ve been somewhat MIA for the last few days. I got rather busy and time flew by with never a moment to blog. My friend Jo did indeed come over on Wednesday for a spinning lesson. She had a lovely and very interesting spindle made by Viking Santa, a name I had not heard of before. Apparently he’s in Delta, BC (not far away) and also makes bobbins for lacemaking. His spindles have a wonderful barley twist to give better grip and his whorls are nicely dished to be rim-heavy for a long spin. Jo had received hers as a gift from a friend. She did quite well at beginner yarn, using the park-and-draft method at first but shifting to free-fall fairly quickly. She emailed me later to say she’d plied a bit up and knitted a wee swatch from it. Her very first yarn! What a treasure!

Meanwhile T-Man is of course very interested in the shape of Viking Santa’s spindles and the barley twist is especially fascinating. Maybe one day I’ll have a T-spindle to call my own. For now I make them out of toy wheels and dowels or buy other people’s turnings. No biggie. I’m patient. At least I have T-made nosties, several of them in fact. And I know how to use ’em too.

Thursday I went to my friend Kirsten’s house for “Spectrum-Lite”, a mini version of our usual once-a-month gathering. Four of us equal half of the Spectrum membership and while they were felting scarves, I knitted like a mad fiend and finally finished my second OXO Cuff: 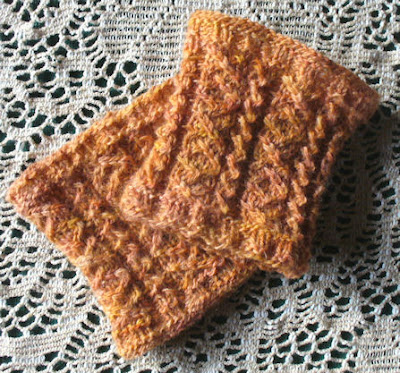 These are rather teensy but warm. Kind of like wearing wooly jewelry. If I had enough patience I could have repeated the pattern and made them longer but they are cute and fairly functional the way they are. I got very tired of the twisted stitch pattern just about the time that it got to be sunk into my brain. I also had a leetle accidental with the chart I was following. I spilled tea all over it and never noticed until the next morning when it looked like this: 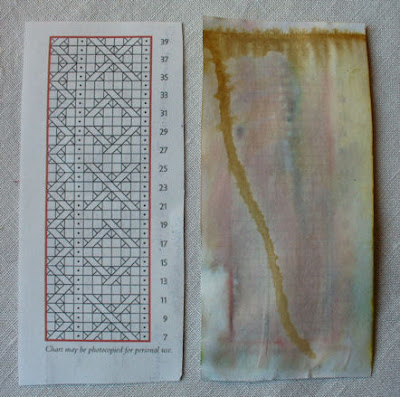 Kind of interesting in a “paper arts” kind of way. But not legible at all. Just shows you how water-soluble my HP printer inks are, eh? I just printed me out a new one and carried on to the end.

Speaking of water, the Wensleydale wool made the most interesting felt. If you layer it very thinly (one ounce makes about 8” x 70” when finished) it develops almost a lace-like texture: 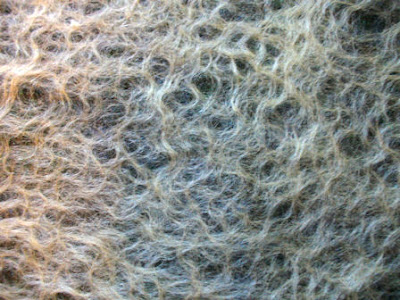 Afterwards, some of the Wensleydale scarves were dyed in an instant indigo vat and some were left natural white: 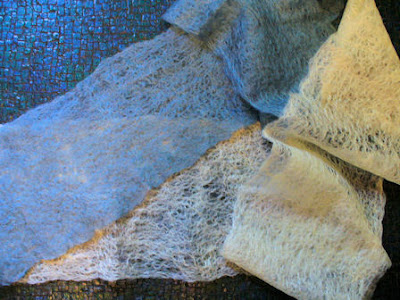 Very cool. They were also working on nuno felt in patterns over silk chiffon (which in this case didn’t really scrunch up as much as was expected) and also some thin merino-tencel felt (which worked properly). I’m not really interested as much in felt scarves though I have the materials and equipment to do some of my own. Eventually.

On Friday, T-Man had the day off so we walked downtown in the glorious but freezing sunshine to get our passport applications in. It only took one and a half hours in the Canada passport office which apparently is very good timing. It will now take a couple of weeks to actually receive the passports but we weren’t planning on going anywhere anyway. I also found out that my BC-ID is crap and needs to be renewed. It’s tough when you don’t have a drivers’ license. You become a non-person. However my other ID seemed to be good enough for them to process my passport anyway. Whew! I’ll wait for my passport before I go to the motor vehicles branch to apply for the ID and hopefully it will help facilitate things.

Today I finally finished fulling the rest of the pears and guess what? I used Orvus this time instead of Tide Free detergent and it didn’t lose it’s colour like it did last time! I don’t have yellow pears like the first ones. I have gold and rust pears. And one green one that finally shrank almost as much as the others. It just needed more fulling than they did because the wool was Romney instead of maybe Corriedale? Not sure exactly. Might be Perendale. Interesting though hey? In laundry detergent (possibly alkaline with additives) it lost colour but in neutral Orvus (mostly sodium laurel sulphate) it didn’t. I’ll have to remember that for the future. Obviously some dyes are sensitive even after they are part of the fibre. Of course, it was probably not an acid “milling” dye which could explain it. Photo to come when they dry. A couple of days from now. It’s cold outside! But the rain is supposed to be coming back. 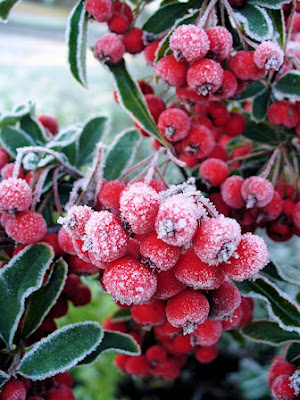 That picture of the berries is stunning!