I woke up today with the return of the labyrinthitis (inner ear imbalance) that I had last winter. Oh joy. Drunk again without the pleasure of having had a drink! Apart from seriously dizzy, I don’t really feel sick and since even my doctor doesn’t know exactly what causes my version of it, we can’t do anything about it but wait it out. It usually only takes a few days before it’s mostly gone. Good thing I have stuff I can do while sitting around. The steep stairs in my house make me nervous and I get tired of bumping into walls and furniture. However I can’t spend too much time on the computer either because the words start dancing on the screen and my eyes get tired trying to keep up. This will be a short post! Then I’ll go back to spinning and knitting. At least I got my Palm refilled with lots of podcasts to listen to and its battery all charged up.

Here’s the final finished group of “peary dustcatchers”. (Thanks, , for that apt description!) 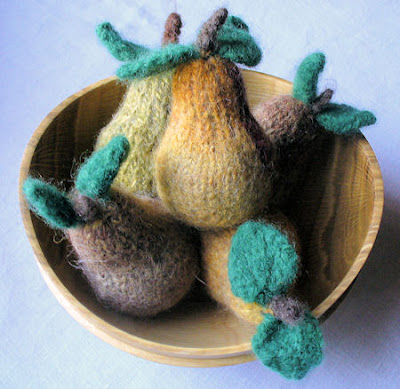 Yarn: handspun wool, mostly 2-ply acid-dyed and approximately worsted weight, some a bit thinner and some thicker. One brown is natural coloured Corriedale. Light green is a singles. The blue-green was the one that didn’t felt at all and was eliminated. A lot of this yarn is very ancient!

Needles: Denise size 7 (slightly smaller than the pattern called for)

Pattern: Wooly Pears by Nicky Epstein from Interweave Knits Holiday 2006 issue, cover.
Comments: I’ve been commenting on these in process all along but to recap, four of these were knitted out of the russet/gold yarn (and one of them had the extra hatching in dark rust). Two of them were fulled in Tide Free and they lost the russet dye, turning golden instead, including the one with the hatching. Also the wool I used for the leaves didn’t full properly so I removed them and replaced with a different green yarn in a slightly reduced leaf size. The green pear was fulled twice before it reached proper size and its leaves were also changed before the second fulling. For that one I used Orvus instead of laundry detergent and the second pair of pears didn’t lose colour. They are much darker, looking more like Bosc pears than . The stuffing was dark grey wool which also fulled some to give the pears a bit of weight and density that they wouldn’t have with poly stuffing. They’re a little smaller than most real pears, just fitting in my hand. The bowl they are shown in on the photo was turned by T-Man on his lathe.

I’m outta here. My eyes have nystagmus, aka “undesired eye motion” and I need to stop looking at the screen. Argghhh…good thing I don’t get motion sick easily.

I get the same sort of thing with my inner ear when I have really bad colds. It used to drive me nuts when I lived in an apartment. It would take me forever to get off the elevator because I'd have to wait for the world to stop spinning before I could step off. I hope you feel better soon!

My sympathies on the labyrinthitis - BTDT, so I know it's no fun.

Hi Damselfly,
Sorry to hear about the dizzy spells. Bruce has had some similar moments lately and there's another possibility! There is a small 'lump' ( for the want of a better word) of calcium in everyone's inner ear and sometimes this gets loose ( a very hard sneeze or even a car accident) There are exercises to do to pop the calcium back into place. Heck it doesn't hurt to ask next time at the Doc's.

The pears are wonderful by the way!

Nothing like a Dizzy Damselfly!! I've heard of that calcium problem before - good info Susan!! I get the dizzies sometimes from ear infections - I find chewing gum helps surprisingly.
At least you'll have more fibre time! But its a drag now that the weather's so beautiful out there!!